Yellow-bellied Sapsuckers and Your Trees 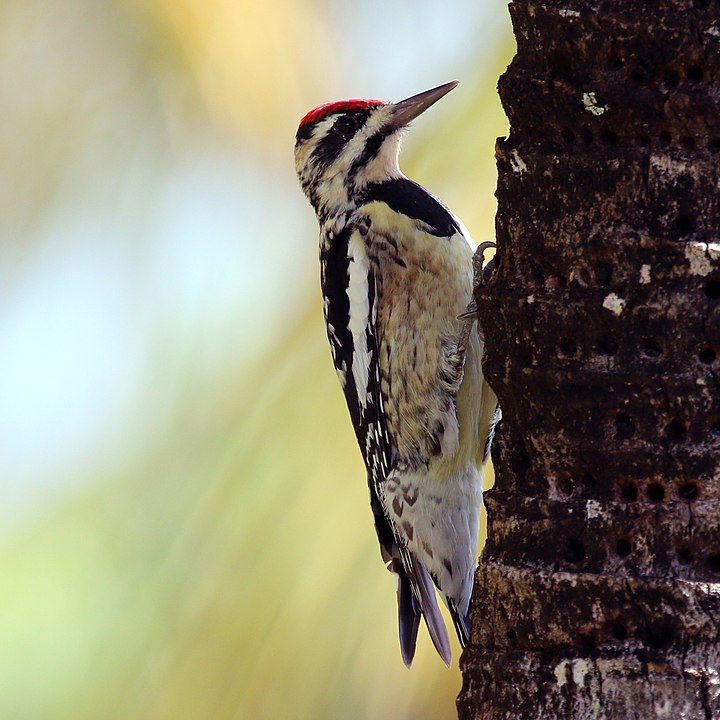 When it comes to birds and trees, most people see the relationship like peanut butter and jelly or spaghetti and meatballs. They just go together. It’s impossible to think of one without the other, and in nearly all cases, it is a mutually beneficial relationship. Trees provide shelter and food for birds, and birds spread the seeds of many trees as well as control pests that may feed on the trees. As with most things in life, there is always an exception to the rule and when it comes to birds and trees helping one another the yellow-bellied sapsucker (YBS) is that exception.  The YBS is a native woodpecker species that damages trees in its search for food and in some cases can even lead to the death or dieback of trees that are the target of this bird.

I first came across the damage of YBSs early in my career when I was called out to diagnose the dieback on a Nellie Stevens holly that was declining and had a dead top. It was easy to see that the stems of the plant had been injured with much of the bark being removed in odd, almost honeycomb-like, sections that had girdled the stem and caused the area above the damage to die. Immediately the thought of European hornet damage arose as these insects are known for stripping back and even some softwoods to create the paper material for their nest building. I was convinced that a bark treatment would prevent future damage and with a treatment applied, I moved on with little expectation of future issues.  Optimism was met with disappointment when damage continued and only then did I realize I was facing an uphill battle.

Yellow-bellied sapsuckers are a unique woodpecker species that gets food in many ways including foraging for fruit and insects, drinking sap, and even baiting insects with sap. Most woodpeckers are known for their rhythmic pecking on large dead limbs to excavate insects from decaying portions of trees. The YBS is not a species that likes to wait around for things to happen. They take action to get food coming their way. Just like their name implies, these birds do indeed suck the sap out of trees by pecking away the bark to create a sap flow from which they drink. They are also quite ingenious as they use this sweet flowing sap to attract insects and then eat the insects as they gather. While the reduction of insects around the tree is usually a good thing, in this case, the damage is worse than the benefit.

Damage from YBS can be seen on many different tree and shrub species, but the most heavily affected plants are hollies, maples, pecans, hickories, and a variety of small, thin-barked species that are commonly used in landscapes.  The damage usually appears as a series of small circular holes that are present in a horizontal line around the trunk or stem of trees. This damage is commonly mistaken by homeowners as a sign of wood-boring insects, and misapplication of chemicals can easily occur. With smaller trees and on smaller diameter limbs, damage can appear as large patches of bark that have been removed, exposing the wood underneath. It is also highly likely that once a tree has been targeted by YBS that it will be used as a feeding site in the following years, further compounding the damage as more bark is stripped away annually. It’s in these cases that treatment or prevention becomes important to stop stem and branch girdling.

YBS are migratory birds and are protected by law, so there are thankfully no methods for poisoning or destroying the birds, but that does reduce the number of ways to protect trees from their damage. The most effective DIY treatment is to prevent the YBS from accessing the bark. This can be done by netting smaller trees and shrubs to eliminate access altogether or through wrapping of previously damaged stems and limbs with burlap. Luckily, the new fad for parties and weddings is the rustic aesthetic which has introduced a significant number of burlap fabric options, including rolls of burlap ribbon that can easily be wrapped around trees. The only issue with this approach is the cost of materials and the limitation of only being able to protect the tree in areas that are easily accessible.

Another bit of luck is that it can be easy to predict when this protection needs to be installed. The YBS is a migratory bird that uses the Mid-Atlantic region as a stopover during the migration from their summer breeding grounds in the far Northeast to their overwintering locations in the South and Mexico. This places the birds in our region in the early October to November range on their flight south and in January to March as they make their flights back north. Over the years of watching the damage, I have come to see much more damage in our region during the return flight north in the very early spring. I assume that this is caused by a great supply of other food during the flight south in autumn and the relative dearth of food during their northern flight, requiring sap feeding and insect baiting. For this reason, I always suggest homeowners install protection on vulnerable trees before Thanksgiving and then remove any barrier materials before growth begins again in the spring to prevent damage to newly expanding leaves and growing stems.

While the yellow-bellied sapsucker can be a nuisance, it is never enough of a problem to call for drastic measures such as poisoning or killing the birds and should be addressed as such. A little bit of prevention can go a long way on small trees and as trees grow large enough, the birds cannot do enough damage each year to cause much if any dieback or decline.  Keep an eye out for these little birds in the late winter and early spring and if you see trees weeping and bleeding during that time, take a closer look. It is likely you will find small holes drilled in the tree and you will know that there is a yellow-bellied sapsucker nearby, filling its belly as it makes its trip back north.