Home | Tree News | Where Are the Last of Maine’s Historic King Pines?

Where Are the Last of Maine’s Historic King Pines? 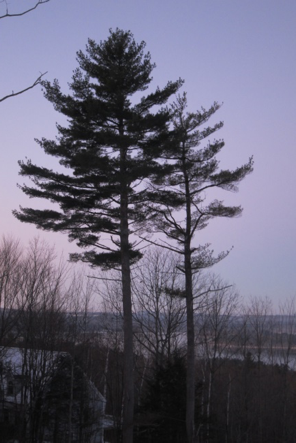 ON A BRIGHT, BUGGY JUNE day, I set off across a Maine river into a preserve called The Hermitage. I was in search of a pine tree claimed by the king of England centuries ago. Snow, mud, and raging water make the preserve impassable at different times of the year, but in early summer the river reached just above my ankle. Ahead of me, on the river’s north bank, sloped a stand of tangled beech, sugar maple, and hemlock—and then, rising above the understory, the straight mud-brown trunks of eastern white pines, crowned by ragged branches at their peaks. These were big trees, ancient trees, more than 120 feet tall, the kind you don’t expect to see on the logging-decimated East Coast.

It was Jeff McCarthy, a roofer who grew up here in north-central Maine, who first told me that I should come here to look for the last king pines, trees that were marked by surveyors for the king centuries ago. McCarthy grew up playing in sporting camps—rustic resorts that are a treasured Maine tradition—near The Hermitage. In the 1990s, he and his friends would try to wrap their arms around the preserve’s larger trees. Sometimes, even three of them together couldn’t complete the circle. When wind felled the trees around the camps, they would count the rings on the stumps: Once, he said, they counted 275, making the tree older than the United States.

Click here to read the rest of the article in Atlas Obscura.