Virginians Advised to Look Out for Invasive Jumping Worms 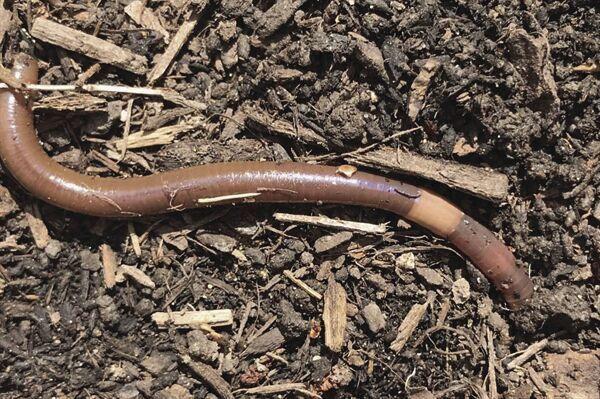 There’s a worm crawling around in the state, and Virginia Cooperative Extension (VCE) is not only asking residents to be on the lookout but to report the invader if it’s spotted.

The unwelcomed visitor is a jumping worm. It’s also referred to as the Alabama jumper, crazy worm, Jersey wriggler, and snake worm. The worm’s names reflect the very active “escape behavior” they when exhibit when handled or disturbed, which includes thrashing movements and erratic jumping.

Native of Japan and the Korean peninsula, jumping worms are reddish to brownish-purple and sometimes have a glossy, iridescent sheen. Adults can be distinguished from other earthworms by the pale-colored band that wraps around the body. Although they’re typically 3-6 inches long, some grow up to 8 inches, according to VCE.

These asexual worms have a one-year life cycle where the eggs hatch in the spring, they reach adulthood in the summer, and they lay eggs and die by winter.

Jumping worms have a voracious appetite for leaf litter and mulch. They’ll remove the top layer of organic material and drastically change the soil structure underneath. Their eating habits deplete nutrients, reduce moisture, and can leave the soil dry with a granular appearance like coffee grounds.

Their removal of leaf litter and the soil erosion that results can expose the root system of trees. These worms can reduce the survival chances of newly sprouted plants and make soils poorer and less productive, notes VCE. Further, animals that live and feed on the leaf litter and topsoil may be affected by habitat loss, says Virginia Farm Bureau.

Jumping worms are commonly found in leaf litter and the uppermost level of the soil. They get transported from place to place in soil and that organic material associated with plants. This means they could be moving around in potted plants, mulch, compost, and the topsoil purchased from various businesses.

Since 2019, in the Northern Neck, these worms have been found Northumberland. Elsewhere in the state, they’ve been seen in Albemarle, Bedford, Chesterfield, Frederick, Goochland, Loudoun, Louisa, Montgomery, Prince William and Wise counties, as well as in the cities of Fairfax, Lynchburg and Virginia Beach, according to the Virginia Tech Department of Entomology.

What to do about it?

If you find jumping worms, first take an up-close, clear photo or a video and report the finding to your local Extension office.

Then kill them. Do this by placing them in a plastic bag and leave the bag in direct sun for at least 10 minutes before throwing it away or drown the worms in a deep container of soapy water, says VCE.

If there are worms contained in an outdoor area, VCE advises solarizing that space to kill the cocoons. Do that by placing a sheet of plastic over the ground for 2-3 weeks to allow the soil temperature to rise over 104 degrees for at least three days. But be aware that this will also kill other plants and turf.

If you plan to submit a specimen to your local cooperative Extension office, make sure it is in a container where it is completely submerged in rubbing alcohol.

“Mainly we hope that people are aware of these invasive worms and try their best to not spread them through potted plants or soil,” said Theresa Dellinger, Virginia Tech insect identification lab diagnostician.