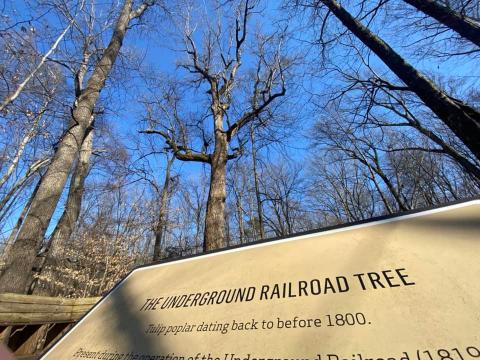 GREENSBORO, N.C. — Tucked away in Guilford County, a patch of old-growth woods undeveloped since the 1800s still holds traces of the Underground Railroad’s hidden history.

Pieces of written and oral history tell stories of men and women escaping slavery, who hid in these woods, protected by the surrounding community of Quakers and free Black families.

At least one tree, far broader and taller than those around it, has been dated at more than 250 years old. Known as the ‘Underground Railroad Tree,’ it has stood as a silent witness to the countless men and women who hid here while escaping to freedom.

Local families were known to bring food, water, and supplies to freedom seekers hiding in the woods – which, at the time, were known as the New Garden Woods. Today, the woods are located on the campus of Guilford College, which was established first as a boarding school primarily for the Quaker community in 1837. Students and teachers were known for helping people hiding in those nearby woods, as well as providing education for African-Americans who were free from slavery.

Because the penalties for attempting to escape, or for helping someone else escape, were so severe, the Underground Railroad was often spoken about in code.

Signal songs were one way of communicating to freedom seekers hiding nearby, without directly alerting anyone to their hidden presence.

In this area of North Carolina, each ‘stop’ could often be found 20 to 30 miles apart. A ‘triangle’ of Quaker communities surrounded much of the Triad area – New Garden, Snow Camp, and Deep River – each of which provided their own ‘stop’ on the Underground Railroad. Each of these communities can still be found today.

A helper on the Underground Railroad might walk past the woods, knowing someone was hiding within, singing loudly to themselves, “My home, Deep River. My home is over Jordan. Deep River. I want to cross over into Camp Ground.”

These lyrics would let a person hidden nearby know that they could continue to Snow Camp or Deep River to find more helpers.

Members of the Quaker community, even today, often refer to themselves as ‘Friends.’ Back during the antebellum period, Israel says a common code phrase was: “Find a friend of a Friend.”

‘A friend of a Friend’ referred to anyone friendly with the Friends, who were known for helping with the Underground Railroad. Even advertisements in newspapers seeking men or women who had escaped slavery would often warn, “They might be hiding among the Quakers or free Black community.”

Friends bringing food, supplies to those hiding in the woods

People would often hide in the woods until they could safely move on to their next stop.

“They would hide there until they could find someone who was going north, who would hide them in their traveling group,” said Israel. “A group would pretend they were a free Black man or woman or hide them in a false-bottom wagon.”

They may even have falsified documents saying they had been freed, just in case they were caught or stopped.

This is very different than how the Underground Railroad functioned in Halifax County near the Roanoke River or along the coast like Elizabeth City or Washington. Depending on what geographical and cultural features you had to work with, the network to freedom worked very differently.

Quaker and abolitionist Levi Coffin, who lived in New Garden, walked into those very woods as a child, carrying armfuls of food, water, and supplies to the Freedom Seekers hiding there.

He wrote about his first formative experience seeing the injustices and cruelty of slavery in his book Reminiscences Of Levi Coffin.

“At a young age, Coffin saw a big cart full of enslaved people chained together walking along the road, and it included a child who was 8 years old, about the same age as he was,” said Israel. “The child was being abused – with whips and chains and all that, to force them along.”

Israel said Coffin broke down crying and asked his father: Why?

“He’d later say that was his awakening. It made him resolve to try and do something about it,” said Israel.

The New Garden Quaker community was not the only helpers in the area. The land along Horse Pen Creek Road was owned largely by Black families who were free from slavery. Many of them, Israel said, were also collaborators with helping along the Underground Railroad.

A Freedom Seeker could disguise themselves, carrying false papers, and travel with other free African-American families. However, the risk for helping was extremely severe – it could include being killed, or even losing your own freedom.

However, there were cases of both white and Black members of the Underground Railroad being killed for helping someone escape.

Likewise, anyone attempting to escape slavery was legally allowed to be killed.

“Any white person who stopped you could ask you to surrender yourself, and they could kill you,” said Israel.

Aside from Quakers and members of the free Black community, there were also people enslaved locally who participated in helping others to freedom. Gwen Erickson, Quaker Archivist & Special Collections Librarian, said, “In Coffin’s book, he mentions enslaved people who were crucial to this network.”

The tree isn’t hard to miss – towering over typical North Carolina trees, with an extremely thick trunk and antique bark. Historic signage has been put up nearby, as well as a wooden platform with benches, where visitors can sit in the shelter and contemplate the history that once happened beneath these very branches.

Guilford College’s archives have preserved some of the written and tangible history of the Underground Railroad’s activity on their campus and in the surrounding community.

Their collection includes antique copies of a local anti-slavery newspaper called The Liberator, old maps that show the historic layout of the area, and an original copy of Levi Coffin’s book.

The old maps give a clue as to why the New Garden Woods was an ideal hiding spot.

“If you look at the locations of New Garden, and Horse Pen Creek, and triangulate that with the local plantation — the woods are right in the center,” said Erickson.

Essentially, the woods were a private hiding place surrounded by helpful Quakers, free Black families, and even helpers who were enslaved locally.

The archives also have the ledger book of the New Garden Boarding school, which shows accounting of employees and teachers who worked there during its earliest years – some of whom continued to teach skills like reading and writing to members of the Black community, even as that became a riskier practice.

Today, the Underground Railroad tree is still standing in Guilford College Woods and is open for self-guided tours.

“It was there as a silent witness to all that took place,” said Erickson. “This root system and structure were here documenting all that unfolded.”

Many, Erickson said, feel this land is sacred. They visit to sit beneath the tree – a silent reminder of the men and women who risked everything for freedom – and those who helped them.