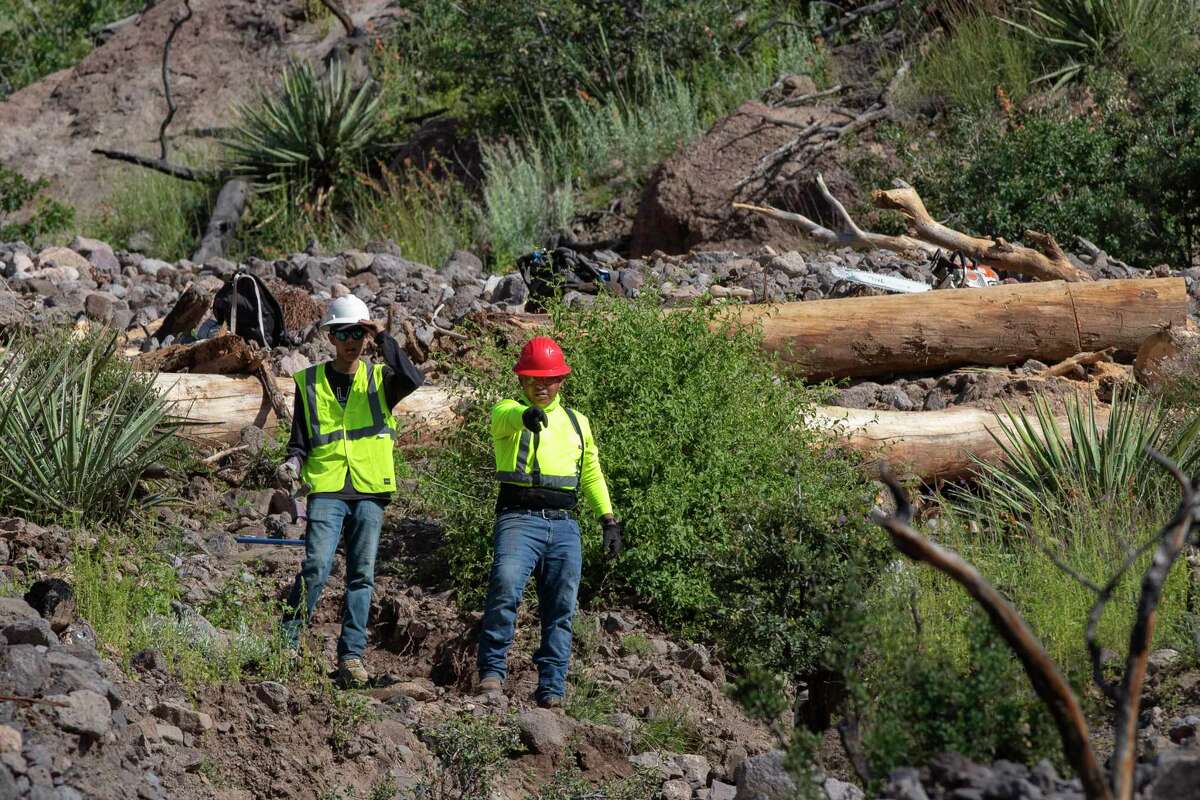 The 99-year-old invites the cloud spirits, rain children, mist, thunder and lightning to join him at Santa Clara Pueblo, where Tewa people have lived for thousands of years on land they call Kha’p’o Owingeh, the Valley of the Wild Roses.

“Without water, you don’t live,” says Naranjo’s son Gilbert, explaining the rain dance song his father, a World War II veteran, has sung for decades — and with increasing urgency as the tribe fights for the survival of its ancestral home. 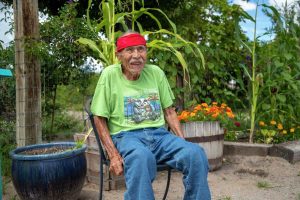 Raymond Naranjo, 99, poses for a photo outside his home in Santa Clara Pueblo in northern New Mexico, Monday, Aug. 22, 2022. Pueblo elders say ancestral knowledge is key for future generations to develop a strong cultural and spiritual connection to this ancient place to help preserve their way of life. Andres Leighton/AP

With unsettling speed, climate change has taken a toll on the the pueblo’s 89 square miles (230 square kilometers) that climb from the gently rolling Rio Grande Valley to Santa Clara Canyon in the rugged Jemez Mountains of northern New Mexico

Hotter temperatures and drier conditions, exacerbated by global warming, have made their forests a tinderbox, shrunk waterways and parched pastures and gardens, threatening a way of life tied to land, water and animals they pray for daily and celebrate through stories, songs and dances passed down through the ages.

Elders in the tribe of about 1,350 remember dense forests of fir, pine, spruce and aspen. A creek cascading through a series of ponds in the canyon. A valley of sage and juniper with shady cottonwood galleries and gardens along a creek and river.

They hunted deer and elk, gathered firewood and medicinal and ceremonial plants and dug clay to make the shiny black and redware pottery pueblo artisans are renowned for. Fields irrigated by the creek and the Rio Grande bore a bounty of corn, beans, squash and chiles. 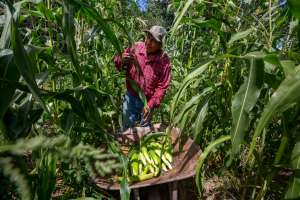 Farmer Eugene “Hutch” Naranjo harvests corn at his ancestral family farm on the Santa Clara Pueblo in northern New Mexico, Monday, Aug. 22, 2022. Climate change is taking a toll on the community, which has been home to Tewa-speaking people for thousands of years. Andres Leighton/AP

But three large wildfires in 13 years burned more than 80% of the tribe’s forested land. The last one, the 2011 Las Conchas fire — then the largest in New Mexico history — burned so hot it hardened the ground like concrete.

And in a cruel twist two months later, it took just a quarter-inch of rain to unleash the first of several devastating flash floods, scouring charred slopes and sending tree trunks, boulders and vast quantities of sediment surging through the pueblo. It buried sections of a Santa Clara Canyon road 50 feet (15 meters) deep, blew out earthen dams and drained ponds where the tribe planned to reintroduce native trout. It decimated habitat for beavers, bears, elk, mule deer and eagles.

In the valley, flash floods still fill irrigation ditches with sediment and ruin crops planted near the creek. And now tribal farmers who for centuries freely diverted water from the Rio Grande can only do so on designated days because the river has been critically low. Hotter temperatures and stronger winds dry the soil quickly, rain is unpredictable, snowfall is scarce.

People here in the high desert are familiar with drought. About 500 years ago, the tribe moved from the pueblo’s cliff dwellings — called Puye, or “where the rabbits gather” — to the Rio Grande Valley after drought dried up a stream and made dryland farming difficult.

But the megadrought now gripping the West and Southwest, the worst in 1,200 years, makes the future less certain.

“How do you prepare … with so many unknowns?” says Santa Clara Pueblo Gov. J. Michael Chavarria. “Where do we go? We have nowhere else to go.”

So the people are trying to adapt by returning to their roots: embracing natural methods to restore their watershed and make the forests more resilient, growing trees and crops from native seeds that evolved to withstand drought. But they’re also willing to embrace new ways if that helps them stay.

Their connection to this place and the future of their people is too important to do otherwise, Chavarria says. “We can’t just pack up our bags and leave.”

Garrett Altmann peers into the woody debris, looking for conifer seedlings planted last fall along Santa Clara Creek. Only a third have survived.

But as he keeps walking, Altmann is surprised to find fir and spruce seedlings sprouting naturally in a previously burned area. Though just an inch high, they represent an ecological victory, says Altmann, a geographic information systems coordinator and project manager with the tribe’s forestry department.

About 60% of the more than 2 million trees planted in the past 20 years, from seeds collected on the pueblo, have died. And some areas, especially unshaded south-facing slopes, may never again support trees in a hotter, drier world.

So to see some sprouting on their own is “like the apex of restoration,” says Altmann, who has crews place logs and scatter tree branches to stop erosion and build up soil. “Knowing that you’re doing something that nature will be able to propagate from, it just makes me happy.”

The tribe hopes to restore and even reengineer the canyon by combining scientific and native knowledge and using natural materials: rocks to slow water, bend waterways and create ponds and floodwater diversions; tree roots and debris to create habitats, enrich the soil and shade seedlings and Santa Clara Creek.

“My goal for this watershed is to build it back better than it was before,” says Altmann, who is not a tribal member.

That’s a difficult but important target, tribal officials say — not just to protect the canyon and prevent runoff that could threaten the village, but also to ease the tribe’s collective grief and restore some of what’s been lost: family hunting and camping trips, pilgrimages to ancient sites so sacred they’re kept secret from outsiders. 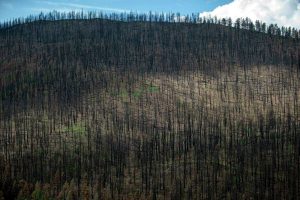 “They say, ‘This just doesn’t look like the same place,’” he says. “It breaks your heart.”

They also worry a generation of children — many who’ve never seen the canyon — will lose an important connection to their culture, including songs that identify special places and give thanks to the animals, plants and life itself.

So the forestry department enlists schoolkids to help plant trees and grass plugs and build rock dams to forge a bond with the land. That’s what motivates Denipah, who says it could take more than 100 years for the tribe’s beloved forests to regrow.

“I’m going to … try my hardest to put things back the way they were and to keep this culture alive,” says Denipah. “That’s what’s important to me – trying to give that back to the people.” 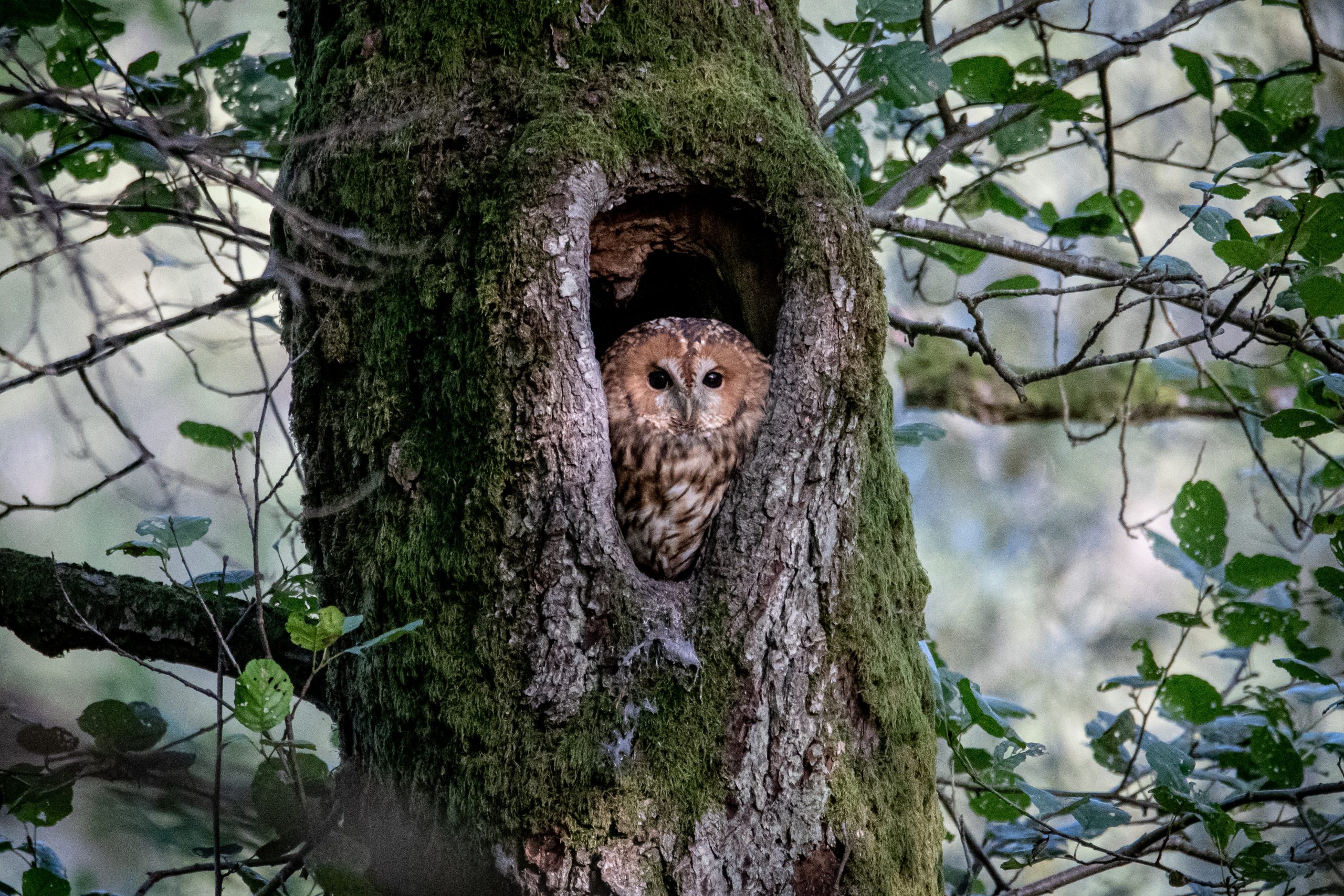 The Destiny of Dead Trees