The Whites of Winter’s Eye 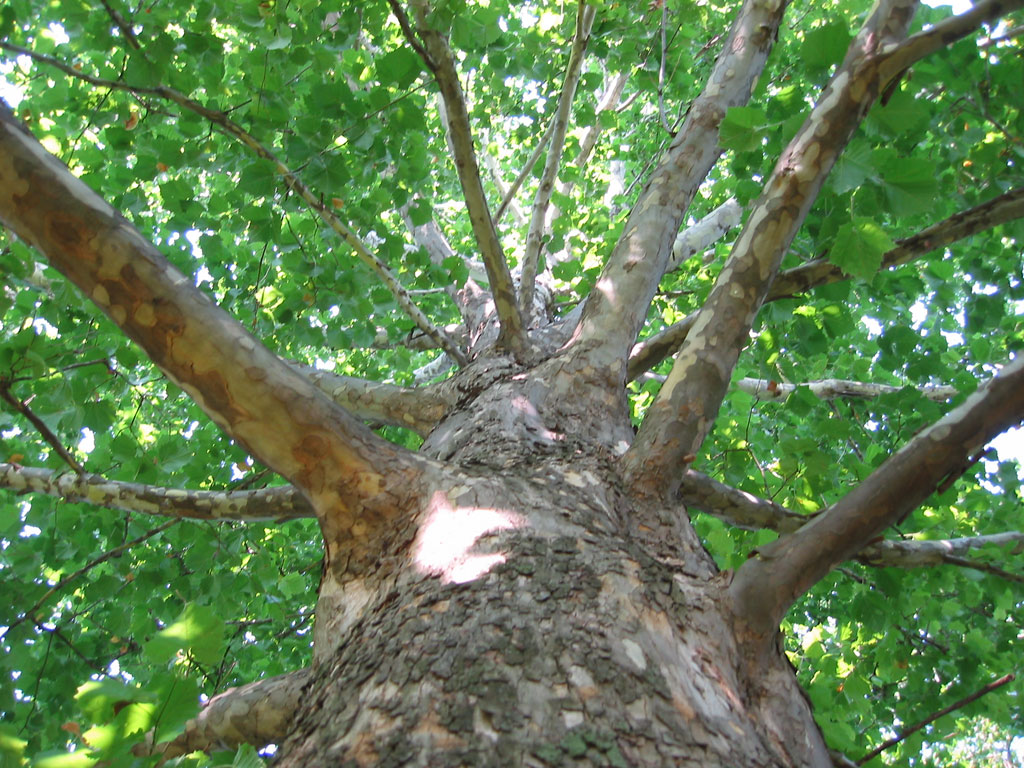 Looking from the south bank of the James River just west of the Huguenot Bridge, I see Canada geese turning their tail feathers to a cool, blue sky as they submarine long-necked heads to feed on silt and vegetation on the river bottom. White buffleheads on winter vacation from Canada twinkle like stars on the dark surface as they take turns diving to rummage for insect larvae. Looking down on this winter feeding is a thick congregation of Virginia’s native trees. From a distance the dense stand of trees on the northern bank form a tangled mass in varying shades of grey and brown. But there is one species in the crowd that seems to want to distinguish itself in the depths of winter even while all the others appear dull and tired. One cannot mistake the great, white monarch of the river’s edge – the glistening, white-skinned sycamore tree.

While Richmond’s native trees typically capture our attention with their clothes on, adorned by flowers, fruits and foliage, the sycamore is best appreciated in winter after its large brown leaves have fallen to earth and its naked white trunk and limbs stand out in stark contrast to the comparatively lifeless forest around them. Hanging from the majestic white frame are multitudes of dangling fruit balls which persist on the tree over winter before breaking up into downy fluff that carries the tiny fruitlets far and wide on wind and water.

The sycamore seems most happy on the borders of rivers and lakes. Anywhere you cross the James in Richmond you will see them gathered near the water. My favorite place to take notice is on the Willey Bridge, where my attention is sometimes dangerously divided between the thick stands of sycamore down below and the path of my truck above. Along with the black willow, the Sycamore has learned to live where many trees cannot, in areas where it will frequently find its lower trunk and roots submerged by a swollen surge of water. Along the James through Richmond, it is common to find either of these trees growing in the space between riverside boulders.

Pioneers properly associated the presence of sycamore with soil fertility, but found various uses for the wood. Though not a suitable wood for home building due to a limited resistance to decay, its wood is nonetheless hard and tough. It is said that the pioneers cut cross-sections of the trunks to make primitive solid wheels for ox carts. Other uses included hogsheads for grain, wooden washing machines and lard pails. Today, though sparingly used for crates and boxes, the most likely place you will find sycamore wood is at the butchers shop since it can be endlessly hacked without splitting.

But I don’t think this tree grows to be used. Along the river’s edge in Richmond this tree is growing to be noticed, and to offer contrast. If your winter becomes too dull and grey, and you find your mood as monotonous as the natural palette surrounding you, amble down to the river’s edge and take notice of one of Richmond’s oldest natives. Look past the grey, the brown, and the dull of hibernating water and earth, and in the space separating the two you will find yourself looking directly into the whites of winter’s eye.