Home | Tree News | The Holly and the Ivy

The Holly and the Ivy 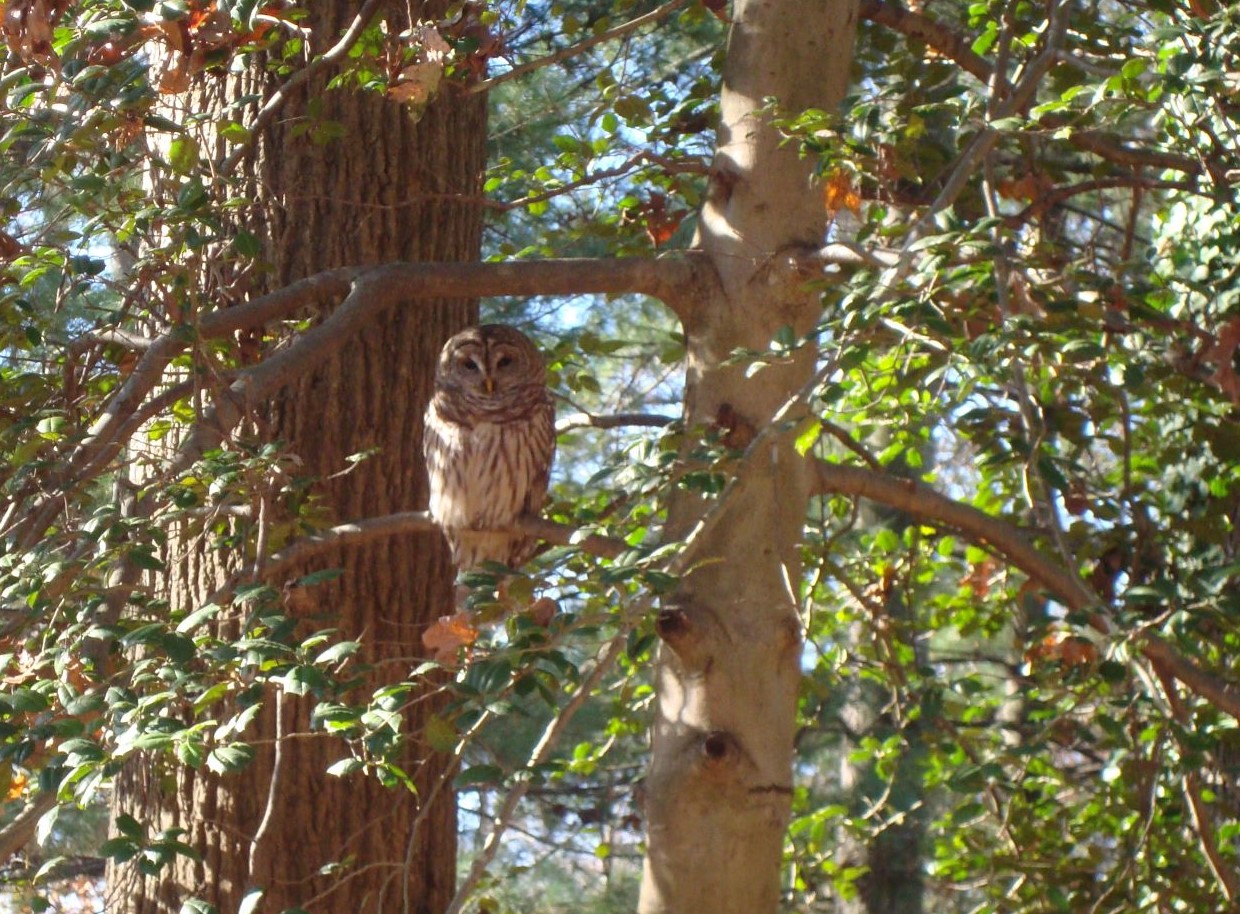 The holly and the ivy

When they are both full grown,

Of all the trees that are in the wood,

The holly bears the crown.

Bluebirds, Downy Woodpeckers, Carolina Wrens, Tufted Titmice, and the bossy gangs of American Robins are regular visitors in December, but none as delightful as the Chickadees that nimbly navigate the interior of the berry-laden hollies beyond my kitchen window.

The American holly (Ilex opaca) itself is a favorite of mine; a local woodland denizen I did not grow up with in the northern Blue Ridge, it is somehow forever novel to me. My son and I recently conducted an American holly survey in our yard. We counted fifteen trees taller than ourselves, a couple of them approaching their mature height of around 40 feet. They are about evenly divided among males and females, the latter having a particularly robust season of fruit production. Shrubbier versions tend to nuzzle up against the larger hardwoods, suggesting that perhaps a Chickadee forbear planted the seed from an overhead branch. Innumerable diminutive offspring are nestled in the leaf litter, thriving in the acidic soil.

But there’s no love lost between me and another evergreen Richmond resident, the one that six years ago inspired the founding of the James River Park System Invasive Plant Task Force: English Ivy (Hedera helix).  This season of dormancy drops the deciduous curtain and reveals the extent to which invasive English ivy (and wintercreeper) are engulfing Richmond’s landscape.

Ivy carpets “natural” areas not already converted to lawn and, most heartbreakingly, enwraps trees until they are less trees than they are scaffolding for the ivy.  Look for vine-draped trees as you travel our city and its neighbors and ivy’s threat to our tree canopy quickly becomes apparent.  Planting new trees in neighborhoods bereft of tree cover is crucial for the well-being of our city, but we also must rescue our existing mature trees that are perishing under invasive vines.

Trees imprisoned by English ivy or wintercreeper are dying. The dense woven web of vines traps moisture against their bark, inviting decay and disease.  The ivy and wintercreeper root systems rob a tree of soil nutrients and water. At the point where you can no longer see the tree’s own foliage for the vines, the tree can no longer effectively photosynthesize to produce its energy.  And a tree so weakened — and then draped in heavy curtains of vines — is more likely to crash down in wind or under ice or snow.

Nor can such a tree serve the habitat needs of our native wildlife. And where trees are surrounded by ivy and wintercreeper groundcover, the monoculture of vines likewise smothers native plants and prevents the successive growth of tree seedlings. The result is a “dead-zone” loss of habitat, while the vertical growth —through flowering, fruiting, and seed dispersal by birds deprived of native food sources — contributes to the perpetual invasive spread that does not observe any boundary between private property and our public parks.

We can reverse this trend by being good stewards of the trees growing on our own property and at our businesses, schools, and houses of worship. It’s imperative that we prevent English ivy from overtaking trees to begin with and to intervene to save trees already suffering. This can be a DIY project for anyone with pruners, a handsaw, and good instructions, or for yard-care companies.  Imagine what we could accomplish if we transferred some of the time, energy, and money spent on removing leaves to saving trees!

Winter is the time to save your trees: it isn’t hot, humid and buggy; the trees are easily accessible; and the evergreen vines are not dormant. Once treated, wintercreeper will begin drooping and browning almost immediately, while English ivy will take longer to wither.

Richmond Tree Stewards provide excellent guidance on English ivy on their website, and Arlington Regional Master Naturalists offer simple instructions on removal on their Choking Hazard page.  Next month in Urban Forest Dweller I will share my own how-to guide to Free-A-Tree, so make your New Year’s resolution now: in 2021 let’s save Richmond’s trees.