The Great Danger of the Tiny Bark Beetle 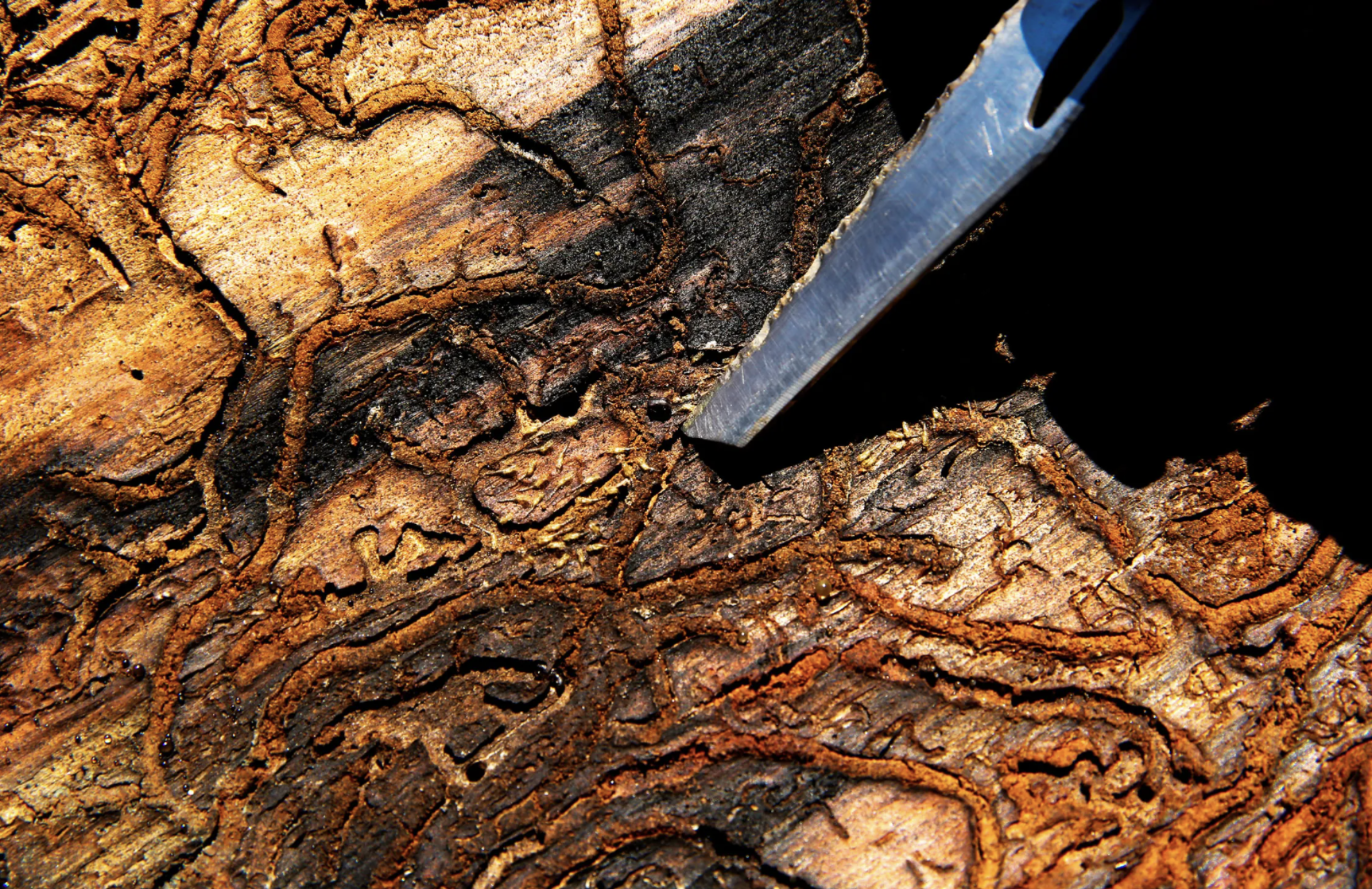 As the climate warms, this insect’s population is booming. That’s bad news for the ponderosa pines of the Sierra Nevada.

As he drove through the Sierra Nevada in 2019, Zachary Robbins noticed all the dead trees. Most of them had probably died around 2016 thanks to a combination of California’s drought and its growing population of bark beetles—tiny creatures that kill giant trees. Although workers had tried to salvage whatever they could for commercial timber, Robbins, a researcher in the Dynamic Ecosystems and Landscapes Lab at North Carolina State University, was astounded by how many withered pines still dotted the forest.

Of some 600 species of bark beetles, the western pine beetle is prevalent in this region. They chew away at bark and live within the phloem of ponderosa pines, the living tissue that transports nutrients. The infestation creates bark beetle “galleries” that look like long-legged centipedes living within the tree; these can kill the host by cutting off nutrient flow. Dead trees can present a perilous situation to nearby residents because they create more flammable material for wildfires.

According to the US Forest Service, about 150 million trees died during the state’s five-year drought, which ran from 2012 to 2016, and in its aftermath. Drought itself kills trees, but the lack of water also weakens them, making them easier for the beetles to attack. These infestations can be fatal for pines—a 2019 study found that among ponderosa pines attacked by bark beetles following the drought, an estimated 90 percent of them died.

Talking it over later with his colleagues, Robbins thought the pine die-off might be attributable to climate change: A warmer climate would mean more beetles, and more beetles would mean more dead trees. “We realized that this landscape will be fundamentally different in the next century,” Robbins says.

To test the theory, Robbins and his team used a computer model to show how both drought and warming temperatures could affect the Sierra Nevada. The data for their model was gleaned from other studies based on either satellite imaging or academic field researchers who counted the number of trees that have already died from beetle infestations. In a paper published in October in Global Change Biology, the team wrote that their model calculated that for each 1 degree Celsius that temperature rises, the number of dead trees will increase by about 20 percent, thanks to the increased success of the beetle population. During a drought, their model showed, this figure can worsen, climbing to 35 to 40 percent.

Beetles have more success in a drier, warmer climate because trees are more stressed. When an insect starts to chew through bark, a tree has a chance to defend itself by releasing waxy resin and chemicals to push the critter out. But under the stress of droughts, trees close the pores in their leaves and needles, reducing their ability to photosynthesize and create the carbon the tree needs to live. The tree then devotes its resources to tissue maintenance, making less of these defense chemicals and resins. All of this creates an opportunity for bark beetles to invade.

At the same time, the life cycle of the beetle speeds up. These creatures are ectotherms, which means their function depends on the external temperature. If temperatures rise, they reach reproductive age sooner and produce more and more offspring.

“Warming temperatures allow bark beetles to go through stages of maturation more quickly, allowing populations to grow to larger, more explosive sizes,” says Chris Williams, director of environmental sciences at Clark University in Massachusetts, who studies droughts, bark beetles, and wildfires. Their larvae live within the tree, and when they are old enough, they turn into beetles, which fly out to find other trees to destroy. Once they start an invasion, they release pheromones, which signal to other beetles that there is room for more. (Beetles are also less likely to die during a warmer winter, but Robbins says this was not a main factor in his California study.)

The 2012 to 2016 drought was particularly harmful because of just how long it lasted. But 2018, 2020, and 2021 have also been extreme drought years. Tom Smith, a California Department of Forestry and Fire Protection senior plant pathologist, has witnessed the droughts’ effects firsthand. “We are seeing this right now with increased bark beetle activity of the western pine bark beetle and other species around California while we enter yet another year of drought,” Smith says. “My major concern is that with the vast number of dead trees on the landscape there is a huge amount of dry fuel just waiting to burn.” These tree graveyards act as catalysts for the landscape-scale wildfires that have been plaguing California.

Mass deaths of 100-year-old ponderosa pines can increase the risk of wildfire for another reason: The pines are a fire-resistant species due to their thick bark. Yet after a beetle outbreak, the old trees are replaced by much younger pines and also incense cedars, which are less resistant. The combination of younger trees that can ignite more easily with dead trees that provide fuel is a recipe for high-intensity forest fires.

Robbins and his team of researchers were floored that a small environmental change, like 1 degree Celsius of warming, could have such long-lasting effects. “This is one of those instances of climate change where there’s no putting the genie back in the bottle,” Robbins says. “Those trees, many were hundreds of years old, and they’re now dead—and they won’t be back for another 100 years.”

“Climate change is not a future event. We are living through the results of the altered climate now,” Robbins continues. “Our ecology is already behaving in ways we could not have predicted, and we will have to manage forests and natural resources with this assumption.”

But what might some of those management decisions be? Robbins thinks that increasing forest diversity will be a protective factor against bark beetle attacks. “And not just tree species, but tree ages,” Robbins says. “We often have trees that are the same age, and they’re all susceptible to bark beetle attacks at similar times.” Without reforestation efforts, Robbins thinks that forests may convert to chaparral shrublands.

Controlled burns to get rid of dead material should be part of the answer, Robbins says, but the sheer scale necessary is enormous. Smith wants to see this happen, too, but he agrees that there are some roadblocks: The right weather conditions don’t occur regularly, the terrain is often difficult to work with, and there are limited numbers of trained fire personnel. “The best option would have been to harvest the trees quickly to remove the dry fuel,” Smith says, but the cost of transportation is prohibitive and there are only so many mills ready to process the timber.

Biogeneration plants, which convert forest residue to heat for power generation, would be another option, Smith says, but not enough of them exist. He also thinks it’s important to educate people about fire prevention, as the National Park Service estimates that 85 percent of fires are human-caused.

It’s harder to imagine a solution directed just at the beetles. Their natural predators are white-headed woodpeckers and black-bellied clerid beetles, but Robbins doesn’t think it would be wise to increase the number of these predators. This is because during non-outbreak years, when beetle populations are low, the predator population would quickly collapse, undoing all the work. Another idea might be to use another kind of pheromone the beetles produce, one that lets their compatriots know when space has run out. But, Robbins adds, that’s not realistic given the size of the forest.

Now, Robbins is looking ahead to how his team’s model can be applied to other ecosystems that might host the same kind of beetle. “We think about the ponderosa pines throughout Oregon and Washington,” he says. “They may also be impacted by these things—just not yet.”