Home | Tree News | The American chestnut is not dead

The American chestnut is not dead 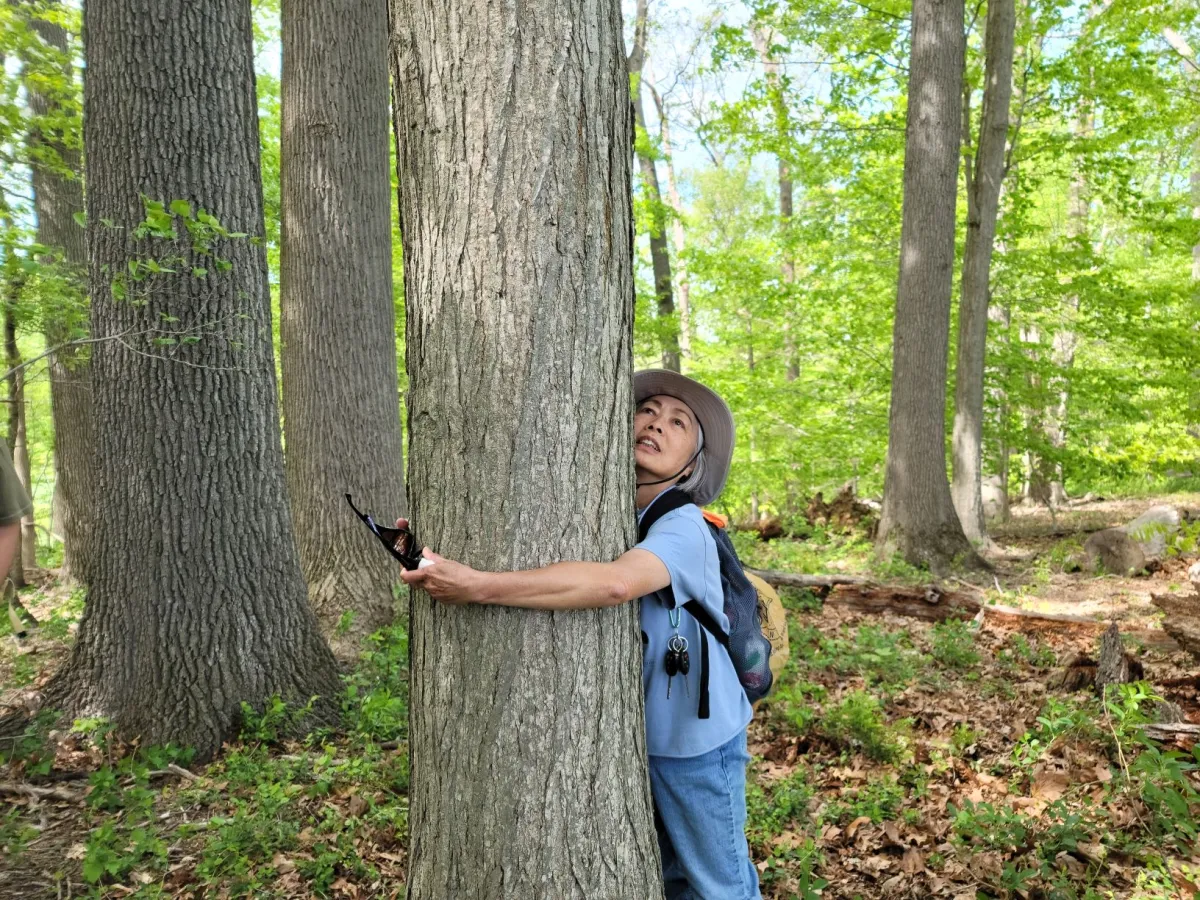 Like a ghost, the chestnut haunts the forests of the East.

Once a key source of food for people and animals, and rot-resistant timber for fences and buildings, the mighty American chestnut was felled by an imported fungus first identified in New York City in 1904. Within a half century, the chestnut population was reduced from nearly four billion giants dominating the eastern woods to spindly sprouts that survive a few years before withering.

Except … the chestnut is not dead. Every now and then, mostly in remote and rugged areas, a full-grown American chestnut is discovered. And scientists at Virginia Tech recently helped confirm one.

In 2019, a hunter, helping thin a deer herd in Delaware’s Coverdale Farm Preserve, owned by the Delaware Nature Society, discovered a 65-foot tall tree that, to all appearances, was a native American chestnut. But was it pure, or a hybrid?

Leaves were sent to Virginia Tech for DNA analysis.

Jason Holliday is a professor in the Department of Forest Resources and Environmental Conservation at Virginia Tech.

“I’ve been working with The American Chestnut Foundation for 10 years,” Holliday said. “If somebody gets in touch with TACF and says, ‘We want to have this tree tested,’ they’ll send it to us most likely. As far as the testing, you can do it with any species, lots of labs do this sort of stuff. But as far as wild chestnuts that people find on their land, they’re probably going to find their way to me.

“Let’s say you find some tree that’s got a big diameter, looks like a chestnut, it can still be a hybrid. There’s lots of hybrids out there … we find all kinds of weird things, like, you’ll find three-way hybrids between Chinese, Japanese, and American chestnut.” 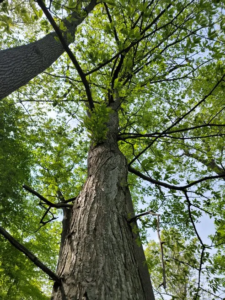 The 65-foot-tall American chestnut discovered in Coverdale Farm Preserve in Delaware and verified by Virginia Tech. Courtesy of The American Chestnut Foundation.

It’s easy to distinguish a Chinese vs. an American on the basis of leaf shape, Holliday said.

“Hybrid are harder, especially multi-generational hybrids (e.g., the offspring of a mother tree who is herself a hybrid). It might look like a characteristic wild American chestnut, but nevertheless be some kind of hybrid. So if it’s important that we know, we always sequence and can say with certainty on the basis of those data.”

An article published Aug. 26, 2022, on the Delaware News Journal website said the Delaware Nature Society received confirmation “this month” that the Coverdale tree was indeed a bona fide American. An article posted on the website of Delaware public radio WHYY on Sept. 9, 2022, said the verification process took “more than two years.” Messages left for Delaware Nature Society for clarification on the timeline were not returned. But Holliday said DNA testing “doesn’t take that long. We’ve sequenced about 6,000 chestnut trees at this point. And so when somebody sends us a sample, it may get in there quickly, or it may be in a line behind a lot of other samples that we’re working on. So it’s just a question of resources and so on.

“If somebody hands me a sample and says this is — and we decide that it’s — priority number one, then it could be a month or two, when we can get the data back. We don’t do them one at a time. We do them in batches when we sequence them, and so a batch is 96 trees usually. And so unless I have 95 ready to go and somebody hands me number 96, I’m not going to be doing that one by itself.” 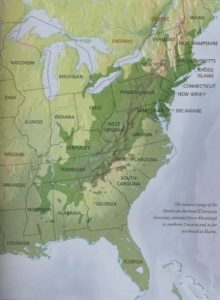 The chestnut’s native range. Courtesy of The American Chestnut Foundation.

Sara Fitzsimmons is chief conservation officer at TACF. In an email, she wrote, “As for ‘Large’ trees, those which are 10″ DBH or larger, we have logged over 500 of these trees in our database, this Coverdale tree being one of them.”

DBH is diameter at breast height, measured at 4.5 feet from the ground. The Coverdale tree was reported to be 18 inches in diameter by WHYY.

“There are an estimated 430 million American chestnuts across the native range,” Fitzsimmons wrote. “84% of them are 1″ DBH or smaller. We have not made an estimate of the Large trees, but it’s likely in the 10s of 1000s.”

How did the Delaware specimen manage to escape the fate that befalls most American chestnuts?

“If you go for a walk anywhere in the forest around here, you’ll see the stump sprouts,” Holliday said. “So the blight will kill the stem. It girdles the stem as if you took like a weed whacker, and went around all the way around a tree and kill it. And so they’ll fall over, but they have this ability to resprout.

“Usually they resprout and they can be six or eight feet tall. They’ll be little, diameter-wise. So soon as that resprout gets to a certain size, the blight is going to infect it again, and knock it back.

“The large trees are much, much more rare. We don’t know very much about whether they’re actually resistant to the blight, or whether they kind of got lucky and are in an environment where they didn’t get infected, or they’re in such a rich environment that they can fight it off in a way that another tree of the same genetics planted on a different site wouldn’t be able to.

“There’s a big environmental component for a lot of diseases. You think about when you get sick. When you’re run down, that cold is more likely to get you harder. It’s not exactly the same thing, but you can sort of think of it that way. If a tree is on a really favorable site, and they’re in really good health, they’re much more likely to be able to fight off a disease of some kind, than the same tree on a worse site.”

The American Chestnut Foundation is pursuing three methods to restore the chestnut, according to its website.

One is genetic modification, in which a wheat gene that confers blight resistance is inserted into the tree’s DNA.

Another is attacking the blight fungus with a virus that reduces its ability to sicken trees.

The other more traditional approach is a long-running breeding program at TACF’s research farm in Meadowview, Va., and other locations across the tree’s traditional range. “They cross American and Chinese chestnut. And then they take the progeny of that and cross them back to American,” Holliday said. “And so one of the tricks with that is finding the offspring in the final generation that are the most resistant. And so we sequence a lot of their trees in order to basically predict which ones are going to be the best, based on genetics.”

The Delaware tree “will be of particular interest in our current and future genomic studies,” Sandercock wrote. “Now that we know that this tree is 100% American chestnut, it will be included in future batches where we sequence the whole genome.”

Fitzsimmons wrote that Holliday and his department “have helped us unlock many mysteries regarding the diversity of remnant populations of American chestnut. TACF seeks to not only create a disease-resistant tree, but one that has enough genetics from the remaining wild population that it can be fully re-installed back into the forests of the eastern U.S.

“How many wild American chestnuts do we need to use and from where? Jason’s work – and that of his lab – are helping us zero-in on which and how many of those remnant trees we need to use to effectively restore the population.”