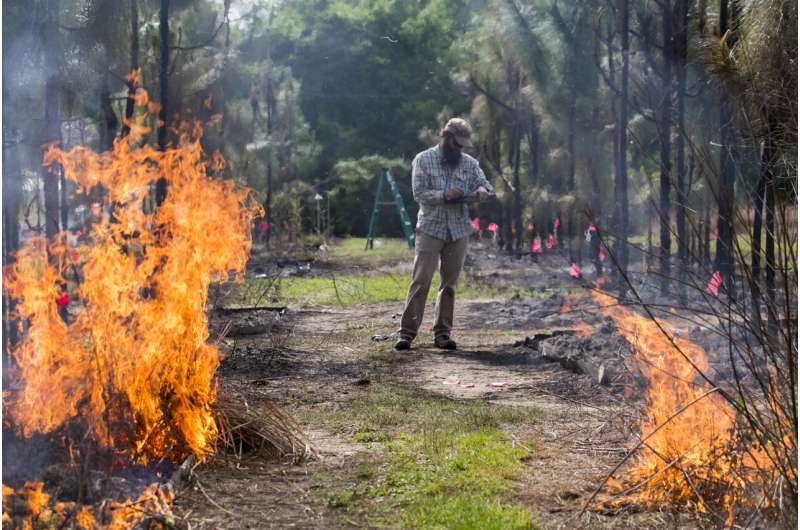 by University of Florida

Scientists have long hypothesized that climate change, by intensifying stressors like drought or wildfires, would make an ecosystem more vulnerable to invasive plants. Those invasive plants may in turn alter the environment in ways that amplify the impacts of climate change, explained Luke Flory, a professor of ecology in the UF/IFAS agronomy department.

The study, published in the journal Ecology Letters, exposed small plots of long-leaf pine to three scenarios: drought conditions, colonization by the invasive plant cogongrass, and a combination of these two factors.

To test how the different scenarios influenced the trees’ survival, the scientists added another stressor: fire. But before lighting the first fire, the team waited almost six years for the trees to grow under each scenario.

When the smoke cleared, the researchers found that trees that experienced both drought and cogongrass invasion were least likely to survive after a fire.

“Less water meant the trees didn’t grow as tall. At the same time, the cogongrass, which is drought-tolerant, provided extra fuel to the fire, making it burn hotter and increasing the height of flames,” Flory said.

Shorter trees plus taller, hotter flames meant those longleaf pines didn’t stand much of a chance, he explained. In plots where the pines were able to grow taller or weren’t surrounded by fire-fueling cogongrass, the trees fared much better and nearly all trees survived.

Experiments that show the interplay of climate change and invasive plants provide important information for land managers in fire-prone areas or areas where prescribed fire is used, Flory said.

“In addition, these findings are one more reason why managing invasive plants is so important to conserving native ecosystems,” Flory said.

Cogongrass and longleaf pines are no strangers to each other. Longleaf pine, the tree species used in the experiment, once covered much of the southeastern U.S., though it now covers only a small percentage of its historic range. This is also a region where cogongrass, which is native to southeast Asia, has established. Fast-growing and highly adaptable, cogongrass is known for taking over pasture and forest areas.

The Flory lab’s experiment is part of a larger global scientific effort called Drought-Net, which collects data from sites around the world to understand how different ecosystems respond to extreme drought.