So long, Charlie: Centuries-old white oak is no more 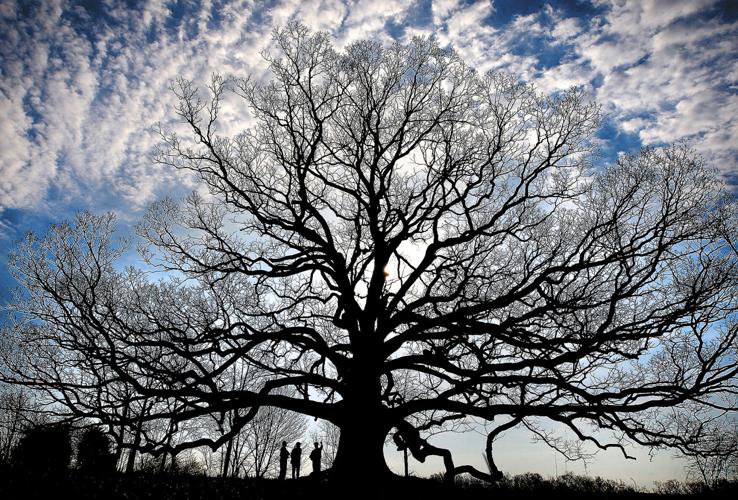 In the foothills of Great North Mountain, a tiny tree has taken root. The little white oak is barely noticeable in this undisturbed terrain.

It’s 2022 and the little white oak has grown into a massive tree. Its trunk is 6 feet wide and its canopy measures more than 100 feet across. It towers above the field where it grows and can easily be seen from the parking lot of St. John’s Lutheran Church, located across the street at 3623 Back Mountain Road.

The tree has become so impressive, so beloved, that area residents have given it a name: Charlie.

Charlie has witnessed the birth of both Frederick County and the commonwealth of Virginia. He stood tall when George Washington surveyed the Winchester area, when the French and Indian War was fought, when the Civil War threatened to split the nation in half, when families struggled to survive the Great Depression, when local boys shipped out to fight in World War II, Korea, Vietnam and the Middle East, and when a young man named Troy Pittenger visited the Shawneeland area during summer excursions with his family.

The young Pittenger was so impressed with Charlie that, about five years ago, he bought the 15-acre parcel of land surrounding the tree. Pittenger was just 22 years old at the time but already knew this was where he wanted to spend the rest of his life.

He and his best friend, Mitch Mahoney, planned to build a house in an open field behind Charlie. The prospective housemates couldn’t wait to start each day looking out their front window and admiring the magnificent white oak.

That all changed earlier this month when Charlie’s life came to a sudden, unexpected end. The tree’s gigantic trunk shattered and all of its branches collapsed onto the ground.

No one knows how it happened because Charlie, despite his advanced age, appeared to be in great health. There had been thunderstorms in the region the night before, but a lightning rod installed in the tree for protection showed no sign of charring and there were no burn marks on the wood.

“Maybe it was wind shear. A microburst, maybe,” Pittenger, 26, said while looking at the huge pile of splintered wood and withering leaves that used to be his beloved Charlie.

One reason for Charlie’s longevity was the fact that he had been loved and protected by many people over the past three centuries.

According to an article published in The Winchester Star in April 2013, Charlie stood about a quarter mile from an iron works that was built in the mid-1700s by Isaac Zane Jr. and Mordecai Bean. To produce sufficient fuel for a smelting furnace, you need the wood from about 1,000 acres of forest every year. Zane and Bean cut down many trees, but they always spared Charlie.

In 1845, one of Mordecai’s descendants replaced the original Colonial-era furnace with a larger one. Even though the bigger furnace required more wood, Charlie was again spared. The smelting operation shut down around the time of the Civil War in the 1860s.

In the mid-1980s, the land where Charlie stood was owned by Joe Racey, who has since passed away. The power company wanted to move an electrical line along Back Mountain Road and said the giant white oak would have to be cut down. Racey told the utility that anyone who tried to kill Charlie would suffer the same fate as the tree.

At Racey’s request, forester Gerald Crowell of the Virginia Department of Forestry inspected Charlie in April 2013. Crowell, who has since retired, determined the tree was approximately 300 years old and, surprisingly, still had a lot of life left to live.

“This one’s in middle age,” Crowell told Racey, noting that white oaks can live 500 to 600 years.

Charlie had already witnessed a Shawnee raid that claimed the lives of settlers in the Hogue Creek area during the French and Indian War in the 1770s, the congregation of St. John’s Lutheran Church building their first sanctuary out of logs in 1793, Confederate Gen. Jubal Early resting beneath his branches while en route to fight in the Second Battle of Winchester in June 1863, and the nearby Rhinehart tire fire that blackened the skies of northern Frederick County for weeks beginning in July 1984.

Sadly, no one will ever know what Charlie would have seen had he lived another 300 years.

Charlie grew up in a time when it took days for important messages to be shared across the region. By the time he died, global communications had become instantaneous. 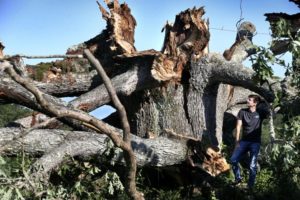 Image by Jeff Taylor ; Mitch Mahoney, of Stephens City, VA stands with what is left of a massive 300-year-old white oak tree

Within minutes of Charlie’s demise, Facebook lit up with people in disbelief:

“I admired that tree every time I drove past it for years.” (tilde) Brenda Nichols

“That was a beautiful tree. So sad.” (tilde) Cory Holder Lounsbury

“I grew up about one mile up the road from that tree. It was simply amazing.” (tilde) Tracy Hulver

“This is devastating.” (tilde) Sally Furr

There were dozens more similar responses to Charlie’s death, but no one grieved more than Pittenger.

“I’ve known the tree my whole life,” he said. “We visited it every summer to see it in its full glory.”

Pittenger said he always knew Charlie had a local fan base, but he had no idea how many people loved the tree until it was gone.

“I probably heard from 40 people in that first day,” Pittenger said. “It was shocking.”

“It felt like going to a funeral,” Mahoney added. “It sucks.”

The past is prologue

When Charlie died, Pittenger and Mahoney canceled their plans to build a house next to the white oak. The thought of looking out their front window every day and seeing nothing more than a tree stump was too sad to fathom.

Jon “Jay” Duvall of Jon C. Duvall Design and Construction in White Post, who had been contracted to build the house on Back Mountain Road, now has been tasked with clearing away Charlie’s remains.

“We’re going to try to salvage some (of the timber) and mill it,” Duvall said. “We’ll either bring the sawmill here and mill it or cut pieces and take it to the sawmill.”

As sad as it was to lose Charlie, there could still be a happy ending to his tragic tale.

Pittenger has a green thumb and, over the past few years, collected hundreds of cuttings from Charlie that could be rooted and grown into clones of the magnificent white oak.

“I’m a big nature person,” Pittenger said, adding he’ll be sharing many of the cuttings with others who loved Charlie. He’ll also plant at least one of the clones where the tree once stood before he sells the 15-acre property.

Pittenger and Mahoney have decided they still want to build a house, just not where they originally planned. They’re currently looking for another suitable parcel of land in the region, and they still want Duvall to build the dwelling.

Their new home could become known as “The House That Charlie Built.” That’s because Duvall said he’ll use some of the lumber to be milled from the tree’s toppled branches when he constructs the new house.

After the house is built, Pittenger and Mahoney said several Charlie clones will be planted around it.