Scientists discover an ancient forest inside a giant sinkhole in China 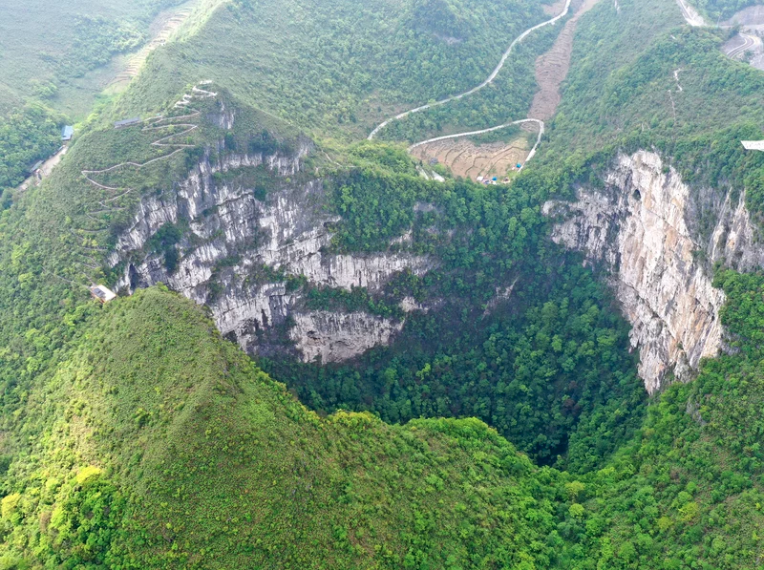 An aerial photo taken in April 2020 shows the scenery of a giant karst sinkhole in China’s Guangxi Zhuang Autonomous Region. A similar sinkhole was found earlier this month with an ancient forest at the bottom with trees towering over 100 feet tall. Xinhua News Agency/Getty Images

Cave explorers stumbled upon a prehistoric forest at the bottom of a giant sinkhole in South China earlier this month. Sinkholes such as these are also known in Chinese as Tiankeng, or “Heavenly pit.”

At 630 feet deep, the sinkhole would hide the Washington Monument and then some. The bottom of the pit holds an ancient forest spanning nearly three football fields in length, with trees towering over 100 feet high. And according to the Chinese government, it is one of 30 enormous sinkholes in the county.

The sinkhole was discovered by cave explorers outside Ping’e village in Leye County, South China’s Guangxi Zhuang Autonomous Region. A team of explorers descended into the pit on May 6, where they found ancient trees and other plant life, according to a Guangxi news release.

Karst is a type of topography, ideal for geological wonders like the sinkhole in Leye County, created by groundwater dissolving the limestone rock beneath the surface, according to the U.S. Geological Survey. About 20% of the United States is made up of karst landscapes, including attractions such as Carlsbad Caverns in New Mexico and Mammoth Cave in Kentucky.Sponsor Message

About 13% of China is covered by karst topography, according to NASA, with the Guangxi region being a prime example of its beauty.

“In China, you have this incredibly visually spectacular karst with enormous sinkholes and giant cave entrances and so forth,” Veni said. “In other parts of the world you walk out on the karst and you really don’t notice anything. Sinkholes might be quite subdued, only a meter or two in diameter. Cave entrances might be very small, so you have to squeeze your way into them.”A stone spire forest in the middle of nowhere

Veni’s institute is the sister organization of the team that discovered the new sinkhole, the Institute of Karst Geology of the China Geological Survey. Chen Lixin, who led the Guangxi cave expedition team, said the prehistoric trees at the bottom of the pit are almost 130 feet high and the dense brush on the forest floor stands shoulder-high, according to the Guangxi news release.