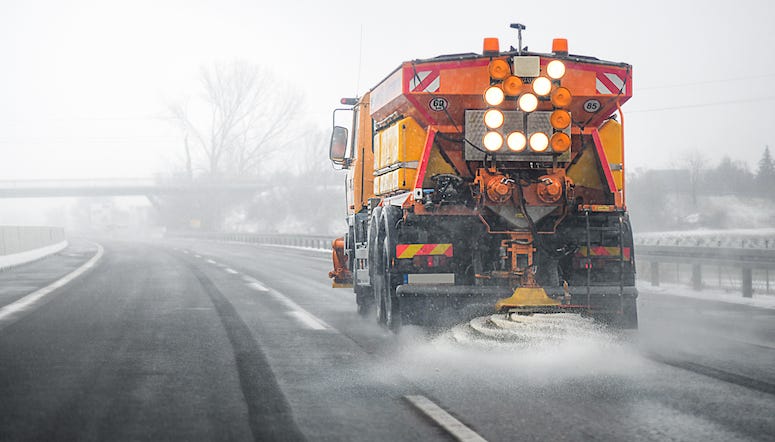 If it’s bad luck for humans to spill salt, then it’s probably even worse for trees and plants and our soil.

22 million tons of salt is dropped on U.S. roads every year. Most commonly used is sodium chloride (rock salt). It’s cheap, readily available, and effective. It’s what allows us to commute after bad weather and helps keep us out of the ER with broken appendages (or worse).

There is a trade-off though. It all eventually goes somewhere, and VDOT doesn’t swap out their salt spreaders in the spring for salt vacuums. That leaves the salt to get absorbed into our soils and washed into our waterways.

Salt spray from passing cars lands on plants and trees and often causees salt burn. This can leave vulnerable plant tissue exposed, drying out developing leaves and flower buds. This isn’t evident in deciduous plants usually until late winter or early spring but can be seen in evergreens sometimes sooner.

Road salt is dissolved in runoff water and is broken down into chlorine and sodium which then displaces important minerals in soil. Plants then absorb the dissolved salts in runoff water instead of the nutrients they need, leading to deficiencies. Chloride ions get transported to the leaves where they screw up photosynthesis and chlorophyll production. Once this reaches a toxic level we start to see leaf burn and dieback.

If salt has accumulated around plants and trees from plows piling up snow, the salt can also absorb the water plants need causing a reduction in growth.

Late winter salt applications can be particularly harsh to plants and trees because the salt doesn’t have a chance to be leached away by rainfall before active root growth begins.

Symptoms of salt injury can include:

Some plants and trees are more susceptible to salt injury than others. I think for the most part our white and red oaks are probably okay, however many maples, pines, firs, spruce, boxwoods, dogwoods, hemlocks, and the pin oak (and many others) aren’t as resilient.

Since we probably shouldn’t lay down in front of the salt trucks in protest, I think it’s important to make sure that we’re doing what we can to decrease the bad luck felt by our plants and trees and try to get perhaps a little more water than usual to our vulnerable trees, like street trees, and plants after a particularly salty season.