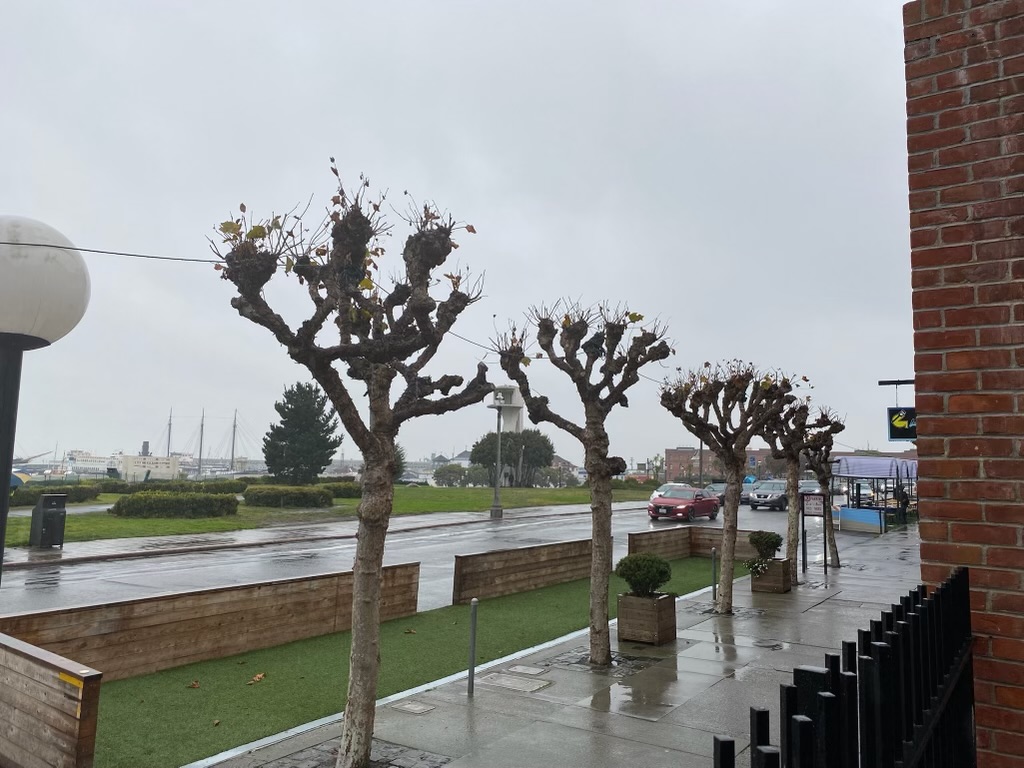 It’s not often that I go on a week long vacation, as life has a way of keeping me too busy – no way to shut down and step away from life for long enough.  With a lot of planning and prepping, my partner and I made time to head to California for a bit of an ecotourism trip. The focus was seeing the stunning macro flora that are the Giant Redwoods, and the ecosystem they populate.  I would love to be able to write about these trees, but it feels irresponsible to even pretend that I understand almost anything about how these massive trees can even exist.  A lot of reading and learning is necessary to scratch the surface of the mystique enshrouding these trees.  One bit of weirdness that I do feel strongly about is the use of pollarding in urban forestry management, which could easily be adopted in our city’s urban forestry program.

The practice of pollarding is quite likely one of the oldest forms of pruning, outside of fruit tree pruning, that is still widely used today.  Pollarding was developed in medieval Europe with purely utilitarian purposes, which likely looked very much like topping.  Upper tree limbs were removed and cut back to lower portions of the main stem or large scaffold branches.  During those times, wood was essential for heating homes and cooking, so wood could become a scarce commodity. Cutting down a tree would not be of long-term benefit, as the tree would be gone. 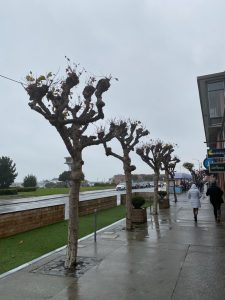 This constant need for wood was solved by allowing the cut back limbs/stems to grow back small shoots. These shoots would be allowed to grow for one to two years before being cut back and harvested.  Each time the shoots are cut back, they are cut in a manner that leaves a small amount of wound wood and shoot material which slowly turns into a large knuckle at the end of each branch.  The development of these knuckles prevents decay from spreading down into the remainder of the tree, and does not damage the tree. While there is little need to pollard trees for utilitarian means today, it is still a very practical pruning method that could be of great benefit in many urban settings, even now.

By pollarding trees, it is possible to maintain trees in harsh urban settings. For example, in sidewalk planters, the trees are kept small by limiting their growth up to the height where the knuckles are maintained.  Even large species trees can be kept small as seen in the photos of London Plane trees (Platanus x hispanica), maintained as small street trees along Ghirardelli Square in San Francisco. Left to their own devices, these trees could easily grow 50 to 70 feet tall, even in the limited soil volume.  Sidewalks would be destroyed, maintaining building clearance would be nearly impossible, leaf debris would be drastically greater, and all work would have to be done by skilled arborists (whose work would be done aloft). 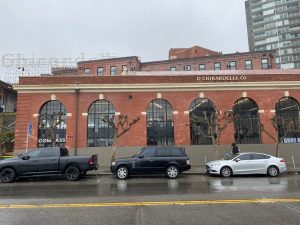 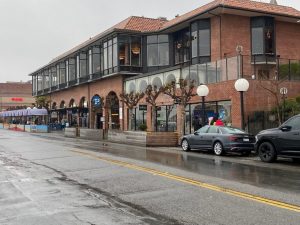 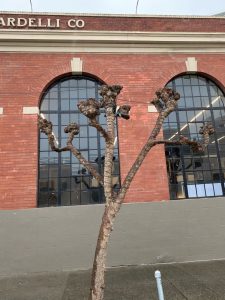 After experiencing first-hand an urban forest that utilizes pollarding for street tree management, all I can imagine is how Cary Street could look with properly pollarded street trees.  It would be possible to have a healthy urban canopy that is much more manageable and still attractive, with shade in the summer and very little cleanup come fall.  This would all come with one universal drawback of this pruning method.  The trees have to be pruned every year if at all possible; and if not, the bare minimum of once every two years.  Since the trees would need annual attention after pollarding has been established, landscapers, volunteer groups like the Richmond Tree Stewards, and city arborists could all perform annual pruning from the ground with little risk.

When a tree is planted, pollard pruning does not immediately begin.  A tree needs to be well-established before the initial pollard cuts are made, to ensure the tree is healthy enough to survive the initial aggressive cuts.  As the tree grows to a desired size, a plan needs to be developed to select which limbs will remain, to promote good canopy shape and proper branch spacing.  The height should be selected based on nearby structures, sidewalks, roadways, and power lines. It should be remembered that as the tree re-sprouts, anywhere from 1 to 3 feet of new growth will be added to the tops and sides of the canopy.  This initial pruning to begin pollarding should only be taken on by a trained arborist who can help determine the proper cuts to reduce the canopy.  The great news is that after this first pollard, the tree only needs to have shoots removed in the winter back to the knuckle, so anyone can do it with no special training.

Finally, pollarding is NOT TOPPING when properly performed; however, it can easily slip into topping without proper understanding of the practice.  When a tree is topped, it is cut back very heavily and allowed to re-sprout with all management ending there.  Pollarding begins much the same way, but with more thought put into where cuts are made.  The real difference comes with the annual pruning and development of knuckles.  Once established, the knuckles must remain and should not be cut into or completely removed, as they are the sites of buds that will provide the following year’s growth.

Even with its long tenure and being widespread throughout Europe and some US cities, pollarding is still a very niche pruning method throughout most of the country.  I like to think that it is simply misunderstood and is perceived as to not fit the aesthetic of our communities.  I would counter that – while out of the norm, pollarded trees are much more attractive than trees topped out for power line clearance, sheared flat to provide clearance to a building, or just a tree that is stressed and dying in a tree well because it has outgrown its soil area.  After soaking in as much West Coast nature as possible this week, I might have to focus some time on slowly introducing pollarding to our urban forest.