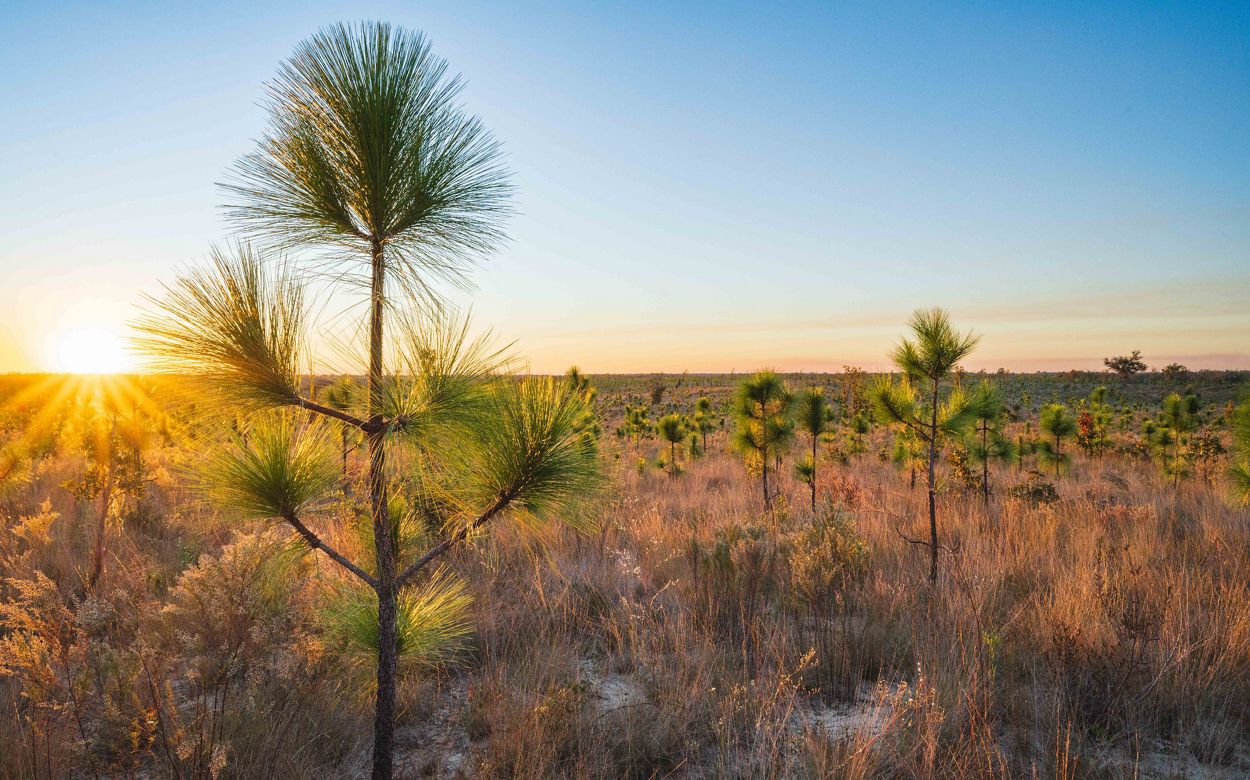 Across the coastal plains of the southeastern United States, amid miles of industrial slash and loblolly pine farms, remnants of another pine forest—once North America’s largest—hide in plain sight. Unlike densely shaded deciduous forests, longleaf pine trees grow wide apart. This distance forms an open canopy that lets sunlight spill down through a mostly vacant midstory to reach a forest floor tightly packed with grasses and flowering plants. Though these forests can feel almost empty, the longleaf pine ecosystem is a trove of biodiversity. Some researchers estimate its species richness is surpassed only by tropical forests and coral reefs. But with less than 5% of longleaf pine forests remaining, states, the federal government and conservation groups, including The Nature Conservancy, are working to save these Southern forests—and the species that depend on them—before it’s too late.

Left to its own devices, the longleaf pine tree is remarkably resilient. Its armor-thick bark and deep tap root help the tree withstand hurricanes, droughts, pests and wildfires. Instead of destroying longleaf pine forests, frequent fires clear them of hardwoods that crowd the ground, unlock nutrients on the forest floor and expose the mineral soil that longleaf seeds need to germinate. With every fire, the forest floor is remade to better support this bustling natural metropolis from the ground up.

“The important part of a longleaf pine landscape is from the knees down,” says David Printiss, fire program director for TNC in Florida. “It’s the grasses and forbs that make up the ground cover—that’s where the magic is.” 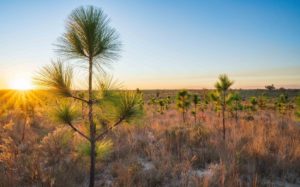 More than 50 kinds of plants can be packed into one square meter of longleaf pine forest, and scores of at-risk species call it home: prehistoric gopher tortoises, glossy indigo snakes, red-cockaded woodpeckers and carnivorous plants with delicious names like sundew and butterwort. 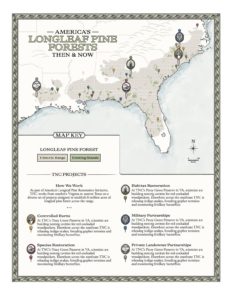 The Nature Conservancy is working to restore the longleaf pine forest. © Nathan Yoder

The historic range of the longleaf pine forest spanned 92 million acres from southern Virginia to eastern Texas. The ubiquity and utility of its trees made them indispensable to colonists who needed raw materials to fuel their New World ambitions. Its surprisingly strong softwood was ideal for raising buildings, producing furniture and laying floors. Its gummy resin formed a tar perfect for waterproofing ships, and the forest’s wild game fed laboring settlers. In the 1800s, longleaf pine wood formed the railroad ties that pushed industrial logging farther inland. In the years following the Civil War, longleaf pine timber was fed to sawmills to rebuild the South and plug a hole in the market left by depleted Northern forests. 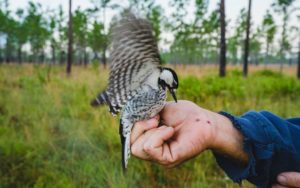 But every step of regional progress put a bigger dent in the ecosystem. Longleaf pine forests were converted into agricultural fields, paved over or replanted with other species of pine that grew back faster and could yield more timber per acre. Eventually, a federal policy of fire suppression robbed remaining stands of the low-intensity burns they needed to regenerate.

By the time the Department of the Interior launched its first full review of the health of American landscapes in 1995, less than 1% of old-growth longleaf pine stands remained. The federal study identified longleaf pine as the third most endangered ecosystem in America.

A healthy longleaf pine forest is a buzzy home to 900 types of plants and hundreds of kinds of animals, including 29 species federally listed as threatened or endangered. Meet some of the flora and fauna that rely on this woodland to survive. 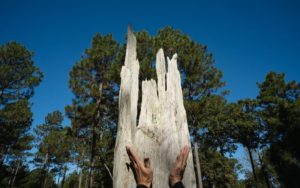 “I’ve read about how settlers could ride their wagons through the forest and see [longleaf pine] for miles and miles,” says Colette DeGarady, longleaf pine whole system director for TNC. “It’s hard to imagine that with the complex land use that we now have, we could ever get back to where it was. But our range-wide goal is to bring back as much of that native forest as possible, not just tiny snippets throughout the landscape.” 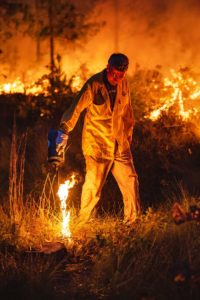 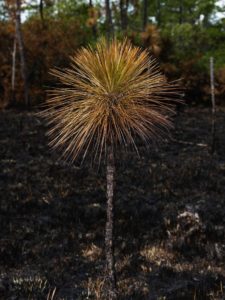 Out of the Ashes A burnt young longleaf pine in the Green Swamp Preserve, Supply, North Carolina. © Andrew Kornylak

The Conservancy’s work is part of a massive effort to revive this piece of the country’s natural heritage. So far, America’s Longleaf Restoration Initiative (a coalition of state and federal agencies, industry, researchers, private landowners and conservation groups like TNC) has helped the forest recover from a historic low of 2.95 million acres in 1996 to nearly 5 million acres today. The group aims to restore another 3 million acres in the coming years.

The lifespan of a longleaf pine can bridge more than four centuries. To reach that point, the tree passes through five stages of development timed to give it the best chance of survival.

To reach that target, TNC and its partners are working across nine states. Returning regular controlled burns to the ecosystem and letting natural wildfires burn through when developed areas are not at risk is helping existing forests thrive. Land acquisitions and conservation easements are knitting together large swaths of connected habitat to bolster populations of threatened and endangered species. And empowering private landowners (who hold 86% of potential longleaf pine habitat) to reintroduce longleaf pine trees onto their property is not only creating new forests but also generating sources of income. 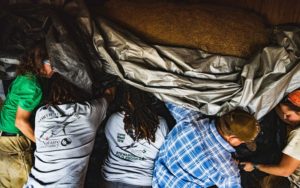 As climate change drives more severe storms and warmer temperatures across the South, restoring habitat this resilient is an investment in biodiversity, the Southern economy and America’s environmental future, says Brian van Eerden, pinelands program director for TNC in Virginia. But it won’t be a quick fix. “It took 400 years to pull this landscape apart—it’s going to take some time to put it back together.” 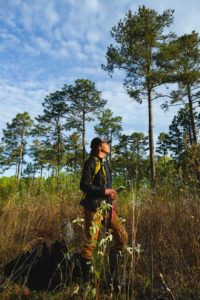