Home | Tree News | One man has collected more than 8,000 pounds of acorns for Virginia

Mike Ortmeier with 20-lb bags of seed he collected for the Virginia Department of Forestry. (Mike Ortmeier)

The start of September may signify to some that fall is coming, but Mike Ortmeier looks forward to a different type of fall – the fall of acorns from native trees.

For Ortmeier, the sight of the first acorn on the ground means it’s time for him to break out his broom and dustpan and add to the more than 8,000 pounds of acorns he’s collected for the state over the past 13 years.

Every year, Ortmeier walks up and down the streets within a one-mile radius of his Arlington home each day sweeping up acorns during the roughly one-and-a-half-month collection window designated by the state, starting in September. He can collect hundreds of pounds each day in a good year, he said, and has accumulated a total of over 715,000 acorns across eight species of trees.

The Virginia Department of Forestry plants the acorns and nuts from native tree species at state-run nurseries to grow into seedlings that will be transplanted throughout the state. These seedlings will help reforestation projects and, in turn, can decrease the amount of carbon in the atmosphere while increasing biodiversity.

“In just a few hours of collecting acorns, you have the potential for forests of these huge oak trees that bring all the benefits with that,” said Katie Blackman, vice president of operations and programs for the Potomac Conservancy. “What we are really looking for is more Mikes.”

Ortmeier’s collection journey began in the fall of 2009 after he retired from the U.S. Department of Energy, where he worked as an economist. He and his wife came across a nearby acorn collection station set up by the Potomac Conservancy, which donates the seeds to state-run nurseries. Realizing that his yard and neighborhood were abundant with acorns, he put two and two together and decided to start collecting them. The conservancy provided him with a user’s guide to collecting seeds and acorns, as well as other resources to help him get started.

“Well,” Ortmeier said, “it turned into something bigger because I kind of like doing it.”

Every fall, he collects the seeds independently and even has a special agreement with Arlington County which allows him to collect various seeds in county parks as long as he doesn’t damage anything. 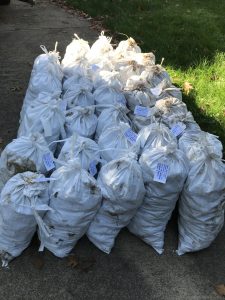 Bags of seeds collected by Ortmeier for the Virginia Department of Forestry. (Mike Ortmeier)

His yield became so big that after a year or two, he said the conservancy was no longer able to accept his donations because it could not accommodate the massive quantity of acorns. However, this year the conservancy launched a new seed collection program known as Tomorrow’s Trees that aims to expand collection opportunities for people in the Potomac region.

Back then, he turned to the Virginia Department of Forestry’s Augusta Nursery Center, which gladly accepted his donations.

Ortmeier “has been a blessing for us here at the nursery,” said Joshua McLaughlin, assistant nursery manager at the Augusta center.

Volunteers like Ortmeier are responsible for the majority of acorns and nuts the nursery plants each year, McLaughlin said. Nursery staff also collect seeds, but sometimes the state has to turn to suppliers, which he said can be expensive. The nursery is self-financed and cannot take monetary donations, which is why he said seed donations are so important

The Department of Forestry offers tree seedlings for sale as well.

Ortmeier estimates that almost 500,000 trees have made it into the wild from the seeds he’s donated over the years. This season is a different story, as he didn’t donate any acorns because there weren’t as many compared to previous years. He had collected 40 pounds, but a small army of chipmunks snatched away the majority after he left his haul outside.

Regardless, Ortmeier managed to donate over 40 bags full of walnuts before the Department of Forestry’s collection season ended.

Nursery staff are currently in the physically laborious process of cleaning, sorting and planting millions of seeds for the next few days. The acorns will grow into seedlings in the following months, after which they will be transferred to areas across the state for permanent planting.