Home | Tree News | On the Fringes with Chionanthus Virginicus

On the Fringes with Chionanthus Virginicus 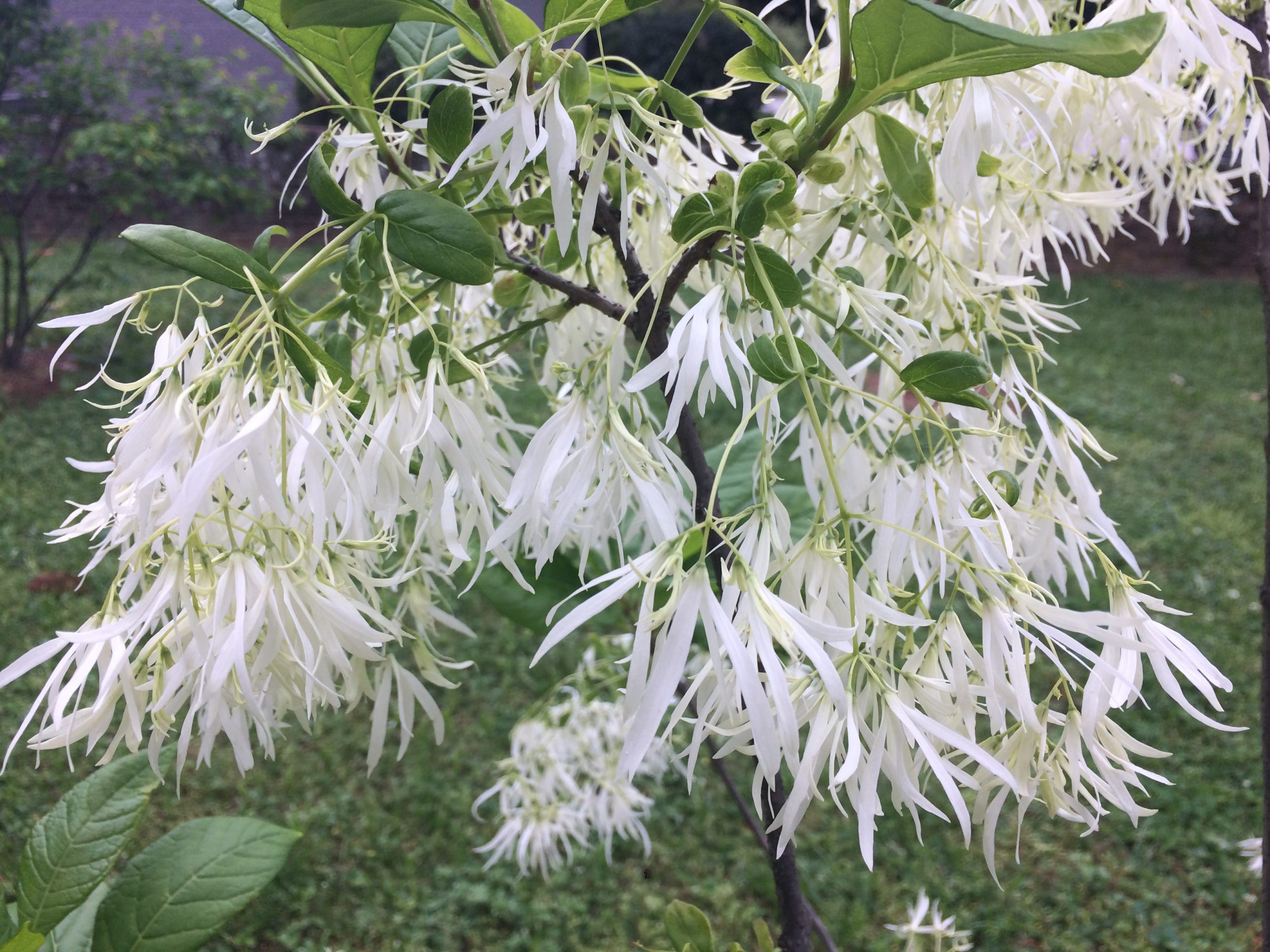 Chionanthus virginicus. I type the Latin genus and species into the Digital Atlas of the Virginia Flora and am surprised by the map the entry returns: a red dot in every single Virginia county indicating that Fringetree occurs statewide, “frequent to common throughout”, from dry upland forests to streams and wetlands.

How then did I manage to grow up and live in Virginia’s Blue Ridge, Shenandoah Valley, and northern Piedmont and not come to know this tree by name until moving within the city limits of Richmond? It can take a lifetime — and sometimes just a single tree — to cultivate attention. I’ve known just one naturally occurring Chionanthus virginicus in the city, and no sooner did I make its acquaintance than it was gone—wiped out by a clearcut for new construction. The ground where that woodland Fringetree would now be blooming is paved with concrete and planted with geometric arrangements of Crape Myrtle and other ornamental, non-native landscaping staples.

Though an understory species so modest in size as to sometimes be classified as a large shrub rather than a small tree, Fringetree is a striking attention-getter. In late spring, its frothy profusion of dangling blooms proves both its common name and the etymology of Chionanthus: snow and flower. The fragrant flowers appear on both male and female trees (most abundantly cloud-like on males), but in order to produce the early fall dark-blue fruit so beneficial to native songbirds, males and females must grow in proximity.

Like the ash trees — the species in the genus Fraxinus — that we are losing to the Emerald Ash Borer, Chionanthus virginicus is one of just a few members of the family Oleaceae native to North America. And also like the ashes, it is a host plant to the Fawn sphinx moth (Sphinx kalmiae) as well as to the Rustic sphinx moth (Manduca rustica). According to Native Plants for Virginia’s Capital Region, Fringetree hosts eight species of native caterpillars on its foliage before it even gets around to luring pollinators with its flowers and feeding songbirds with its berries. The ubiquitous non-indigenous crape myrtles that have “replaced” that wild Fringetree cannot support a single specialist insect species.

The nursery-sourced Chionanthus virginicus most commonly seen in landscape plantings are typically multi-stemmed shrubs no more than 8 to 10 feet tall.  But the forest dweller I knew was at least twice that height on a single branching trunk. I was so taken by that tree that, before its demise, I purchased my own Fringetree at the annual plant sale at Blandy Farm, the State Arboretum of Virginia. Despite the species’ unfussy reputation, the planting location I chose proved to be less than ideal or perhaps I unintentionally committed a local ecotype mismatch. This year the top half of its growth has died. Prior to this reversal in health, my Chionanthus had tripled in height while its stem remained no thicker than a Sharpie. Slow growers, these Fringetrees. I wonder how many Mays the full-grown wild Chionthanus had bloomed before it caught my eye, how many years of growth ended with one thoughtless swipe of a chainsaw.

So Chionthanus virginicus asks not only for our attention but for our patience.  I look now for sources of seedlings or saplings that will come closest to what nature bestows in the woods. I contemplate my yard’s more sunlit canopy openings and richer soils. Whatever this fall brings, I intend to be planting Fringetrees.