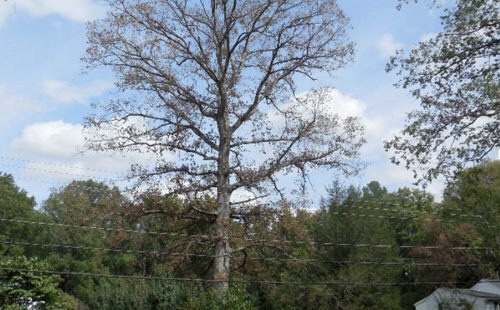 Trees affected by defoliation or environmental stressors, like drought and frost, become weakened. Once trees have been weakened, they become more susceptible to insects and diseases that would not normally kill trees. These normally secondary pests are able to overcome the tree’s defenses and begin to kill the tree. The decline can sometimes take several years or can sometimes seemingly happen overnight.

Oak decline is first noticeable as dieback from the branch tips. Yellowing of the leaves and/or leaf drop prior to autumn as well as sprouting from the trunk are other common symptoms.

There are two major causes of damage associated with the decline. One is insect and the other is disease. These two factors usually work together to cause the tree’s eventual death.

Armillaria root rot is the more common disease associated with decline. The rot typically appears white and spongy or stringy. The disease is common though it’s usually found on the roots of dead trees. When the tree is stressed, the rot is able to infect the roots and girdle them over time. The girdling cuts off the flow of water and nutrients up and down the trunk, cutting off the food supply for growth which causes the eventual death of the tree.

The insect usually associated with the decline is the two-lined chestnut borer. It’s usually in oak trees and attacks stress weakened trees. The larvae of the beetle feed under the bark creating feeding tunnels called galleries. As the galleries begin to overlap, the tree is slowly girdled, resulting in death.

Watering and mulching can reduce competition with grass. Remember mulch should only be about 3 inches in depth and 2-3 inches from the base of the trunk. Sometimes stress culprits can be hard to find, and there could be some measures to curb the decline. A good arborist can spot symptoms and if possible suggest measures to slow the process of decline.