Nonprofit Seeks to Save Chappaqua Forest From Development 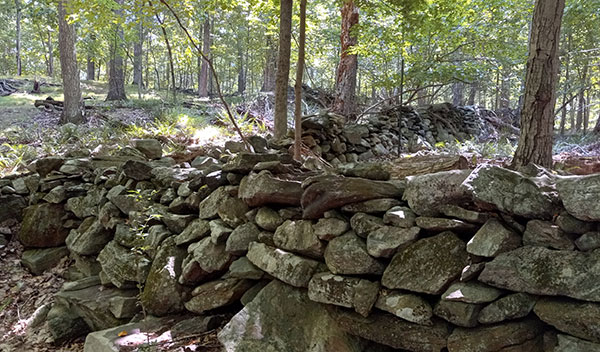 A citizens group has pledged to submit a bid later this month to buy and preserve a 20.3-acre forested parcel in Chappaqua that is believed to be sacred Native American ceremonial grounds to save it from development.

Friends of Buttonhook, now a nonprofit organization named after what local residents have been calling the forest, has been fundraising and attracting donors this summer to be in contention to purchase the property off of Garey Drive from the Chappaqua Central School District (CCSD). The district, which obtained the property from Jacob Zauderer for $125,000 in November 1973 to potentially build a school at the site, had been looking to subdivide the land in order to make the property more attractive to a developer.

In June, district officials announced that it would be accepting bids for the property a few months after a contract with a developer expired. The district received preliminary subdivision approval from the New Castle Planning Board in March 2019, but was unable to proceed further after running into difficulty receiving a stormwater permit from the New York City Department of Environmental Protection (DEP) since the land is in the city’s watershed.

Two types of bids are being accepted until Aug. 30, those that want to buy the land with or without final subdivision approval.

However, Tracey Bilski, vice president of Friends of Buttonhook who lives on an adjacent parcel, said the discovery of Native American artifacts since the environmental review process was conducted for the subdivision application sheds new light on the property. She said Native American experts have provided evidence that tribes lived on and traversed the land well before Europeans settled in the area, intensifying the urgency for her and others to protect the site.

While walking on the trails on her side of the property line a few years ago, Bilski noticed stone piles mostly on the school district’s parcel but which also extend a bit onto her land. Each pile and the pattern of how the different piles are placed appeared to be intricate rather than random, she noted.

In all there are about two dozen stone structures that she can see.

“I didn’t know what it was. It was very unusual,” Bilski said. “There were large stone piles and it didn’t make sense from a farming perspective because there was ledge, rock ledge behind it, so it wasn’t as if there was a farm field that had been cleared.”

Since Native American tribes have been known to have populated the area, she reached out first to the New England Antiquities Research Association, which put her in touch with Dr. Curtis Hoffman who wrote a book called “Stone Prayers,” about Native American ceremonial grounds. Hoffman recommended that she contact Nohham Cachat-Schilling, chair of the Massachusetts Ethical Archaeology Society and a medicine elder of the Opitemakaning Mawhihtit (Bridge in the Sky Medicine Circle).

Cachat-Schilling issued preliminary and supplemental reports based on what he was able to glean from Bilski’s property, confirming the existence of ceremonial stone features on all accessible properties around the school district’s land. Ceremonial stone features were also visually confirmed from the boundaries of the parcel.
Because the stone structures are undisturbed from being in the middle of a forest without development, the Buttonhook property is extraordinarily valuable, he wrote.

The discovery and confirmation gives Friends of Buttonhook President Victoria Alzapiedi hope that not only more donors will step up in the three weeks before the bids close to help with the fundraising efforts but that the school district will recognize the significance of the land. Under the Request for Proposal, any bidder must have $100,000 in cash and have enough money on hand to cover its bid.

“We’re very optimistic that we will be able to raise enough funds to make a highly competitive bid that the Chappaqua Central School District will accept, so that this land will be preserved and the 676 trees in this untouched forest will be protected from being clear-cut, and that this Native American sacred ceremonial site can be preserved intact to respect the Native American culture,” Alzapiedi said.

The district does not have to accept the highest bid or any bid at all, according to school officials.

“The (Board of Education) has the ability to make a decision based on what is in the best interest of the district, so there could be multiple factors involved. So it doesn’t necessarily mean the highest price,” said Assistant Superintendent for Business Andrew Lennon.

Bilski said the last price the district had sought for the land was $2 million, so the Friends is working to get as close to that figure as possible.

District officials responded to further inquiries by pointing to public statements that the board and Superintendent of Schools Dr. Christine Ackerman have made on the issue.

At the Board of Education’s May 4 meeting, Ackerman said there had been significant communication between the board and the town regarding potential historical and/or archeological significance. But the state Department of Environmental Conservation was unable to find any by the time the Environmental Assessment Form (EAF) was completed.

“I also think that it’s important to share that should we sell the property, the builder would have obligations to follow New York state requirements should they uncover items of archeological significance,” Ackerman said.
The district also does not plan to engage in any additional review of the site, Ackerman added at that meeting.
For the Friends of Buttonhook, while the historical and archeological significance is critical, so to is preservation of the environment, including saving animal habitats and combatting climate change.

Resident Stacy Morgan said the loss of hundreds of trees is exactly the kind of activity that communities locally and globally need to stop. She was further motivated after a large group of Horace Greeley High School students petitioned the district to preserve the land.

“That’s where I get my energy from,” Morgan said. “I want to help the younger generation. Why shouldn’t we just leave it to them?”

Furthermore, Alzapiedi said when the EAF was completed, it stated that only small mammals and songbirds used the property as their habitat, but the land is also home to bobcats, coyotes, woodpeckers and other species.
For Bilski, Friends of Buttonhook is prepared to submit its bid right before the deadline on Aug. 30. Members are hopeful, but they are also willing to work with a developer to preserve the site for the sake of Native Americans and for future generations of local residents.

Bilski has been providing tours on the trails on her property for those interested. More information about that and the group’s efforts can be found on its Facebook page and at www.preservebuttonhook.org. So far, they have been endorsed by about 25 area organizations.

“We’ve got our work cut out for us, but I really believe the response that we’re getting has been tremendous in terms of connecting with us and people taking the information and passing it on to others,” Bilski said.