May You Bloom and Grow: Native Plant Species to Notice Now 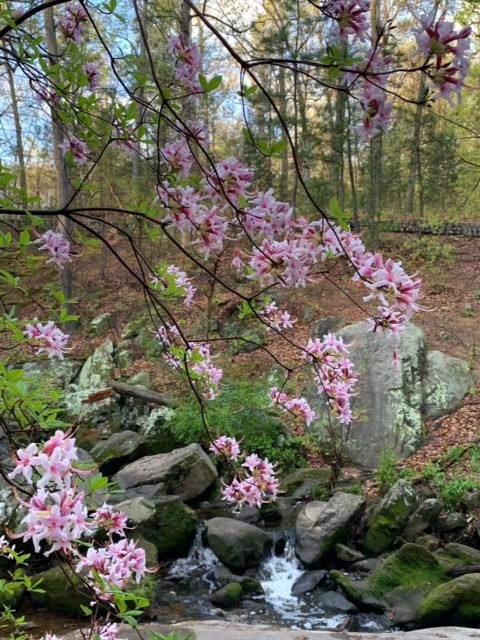 “Once in a golden hour

there fell to earth a seed

up there grew a flower

the people said, a weed.”

I memorized this little rhyme as a child because a framed version hung on my bedroom wall. But it means more to me now, as a certified Virginia Master Naturalist delighting in every appearance of a native plant in an area so devastated by overwhelmingly extensive invasive plant infestations.

Treasures still abound — often hidden in plain sight — in Richmond’s parks, along roadsides, and in unmanicured wooded yards. What generations of homeowners often dismissed as weeds have been largely displaced by turf grass lawns, exotic ornamental landscaping, and, increasingly, complete removal of leaf litter (an ecological term – leaves are not garbage, and we need to stop treating them as such). But some native plant species are particularly adept at hanging on given the slightest chance.

Attention is all it takes (no botanical expertise necessary) to truly see and appreciate the indigenous flora of our Fall Line ecosystem. Here is just a smattering of your fellow Richmond residents you may be encountering this spring:

Mayapple (Podophyllum peltatum L.) Found in every county in Virginia, the whimsical Mayapple is a familiar sign of spring in the Commonwealth and it thrives in our local woodlands, particularly well-shaded damp spots, maturing here well before May. The leaves are deeply palmate and if there are two, a single white flower will follow (visible only if you peek beneath the umbrella-like leaves) and later, the so-called “apple”.

Cut-leaf Toothwort (Cardamine concatenata) This diminutive spring ephemeral is one of four members of the genus Cardamine in Virginia. Cut-leaf Toothwort comes and goes quickly in early spring and depends on deep leaf litter for nourishment.

Sweet Cicely or Aniseroot (Osmorhiza claytonia or Osmorhiza longistylis) These two species of the genus Osmorhiza are prolific, but don’t mistake them for the invasive and slightly similar (at a glance) Garlic Mustard.

Rattlesnake Weed (Hieracium venosum) Identified in nearly every county in Virginia (including those with rattlesnakes) Rattlesnake Weed absolutely will not bite, but may surprise you with its bold leaves and spindly bright yellow flower high above. Look for it on edges that have a bit of sun.

Jewelweed (impatiens capensis) Jewelweed is in its early stages of emergence in drainages, swampy areas, and streamsides in our area; the showy, pollinator-magnet flowers that give it its common name will appear later in the season. Jewelweed has lots of fans among invasive plant warriors because of its ability to stand up to habitat destroyers like Japanese stiltgrass.

Poverty Oatgrass (Danthonia spicata) Our region is home to many native grasses, sedges, and rushes that (like all native plants) perform crucial ecosystem services where turfgrass does . . . almost nothing (when it comes to slowing and filtering stormwater runoff, a lawn performs not much better than pavement). Poverty Oatgrass prefers drier conditions, but is otherwise not picky. And Curly Grass (as it’s also called) is the host plant to the caterpillars of the Indian Skipper butterflies.

Striped wintergreen (Chimaphila maculata) Don’t be surprised if you spot this tiny evergreen in the vicinity of much taller neighbors, the American holly (Ilex Americana). Both occur in acidic soils. Bloom time is still ahead of us, so keep an eye out for the nodding, creamy white flowers late in spring and summer. Find out the meaning of its Latin name and explore the world of the very small in this blog post on The Natural Web.

Pinxterbloom Azalea (Rhododendron periclymenoides) We landscape with cultivars, but can they really hold a candle to Virginia’s native azaleas, of which Pinxterbloom is just one of seven? Certainly not when it comes to sustaining life; those seven species host the caterpillar larvae of at least 50 native butterfly species. The Virginia Native Plant Society blog currently features the Pinxterbloom for good reason.

This is just a handful of the locally native plant species you may be seeing in your neighborhood and in our parks now and year-round. If you’re lucky enough to have them right at home, keep up the good work of nurturing nature!