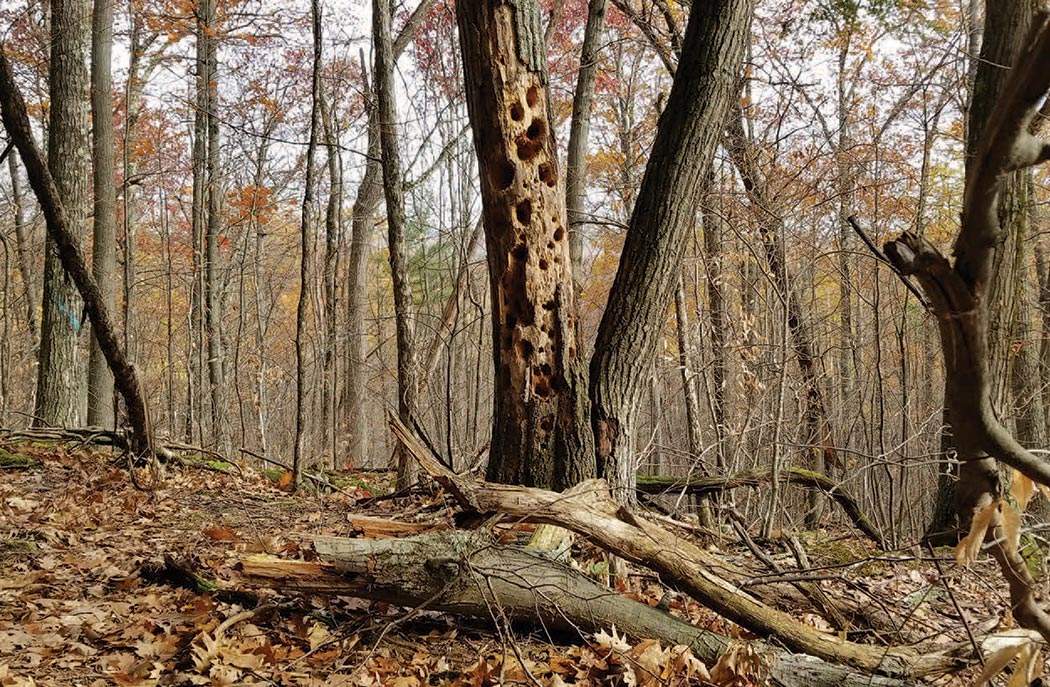 The ecological importance of dead wood expands what it means for a tree to be “alive.” In fact, research from the Pacific Northwest suggests that dead trees can harbor as much as quadruple the living biomass as living trees. As with living trees, dead trees provide complex and important habitats. Nurse logs, for example, supply moist, rich seedbeds for trees, plants, mosses, lichens, and liverworts – as well as habitat for amphibian species such as salamanders. Dead wood also provides critical habitat for fungi and invertebrates, which are important to soil formation, as well as for some of our hundreds of species of native bees. Snags offer foraging sites for woodpeckers, which excavate cavities that shelter dozens of species of birds and mammals.

So why don’t we love dead wood? While there are several popular misconceptions about it, including that dead wood spreads disease, the most common answer is aesthetics. In my experience, when landowners say that their forest is a mess, they are nearly always talking about the presence of downed trees and snags. We’re also just not used to it; while forests with lots of dead wood were the norm in the Northeast for thousands of years, land use during the last two centuries has created young forests with one-quarter to one-half as much dead wood as old forests. Now, landowners often go to great lengths to clean it up: they cut it, pile it, chip it, and gather it into windrows.

Unless you live in a fire-prone area, or are maintaining access to your forest for stewardship purposes, cutting up or removing dead wood serves no ecological purpose. In fact, it diminishes many of the positive benefits that dead wood offers to soil health, carbon storage, wildlife habitat, forest hydrology, and forest ecology.

When I’m working in my forest, I celebrate dead wood and try to create more of it. I leave fallen trees on the ground and leave snags standing (except where they constitute a hazard). Instead of cutting dead trees, I focus on being proactive with my management: felling living trees to encourage the growth and vigor of remaining trees, to create canopy gaps, and to release pockets of established regeneration. I find that most time is spent – and most residual damage done – in the process of skidding trees out of the woods, and I’ve become comfortable with leaving smaller and more marginal trees on the ground. When I do pull trees out of the woods, I leave limbs and treetops completely un-lopped on the forest floor.

Girdling, a method of creating snags quickly or killing large trees in a way that is generally safer, can also be an effective tool and is faster than felling trees. However, research suggests that girdled trees do not provide the same habitats as trees that decline naturally during a longer period of time. For this reason, in addition to girdled trees and snags, I also leave some legacy trees (see “Forest Insights” in the Spring 2022 issue) to become snags and dead wood on their own schedule.

When I’m working with loggers, I ask (or even require) them to avoid lopping treetops and brush and encourage them to cut and leave commercially-marginal trees on the ground. While some loggers are initially resistant – they’re concerned that to leave a “messy” forest would reflect poorly on their professionalism – it’s gratifying when they eventually realize that working this way can be safer and more efficient.

As we expand our idea of what forests are, and the factors that contribute to their health and productivity, we have an opportunity to redefine what healthy forests – and responsible forest management – look like. While it may seem counterintuitive, lots of dead wood of all different arrangements, shapes, sizes, and species, and in all different stages of decomposition, is critical to the health of the forest’s biological community. It may look messy, but it is part of what makes our forests so vital and so beautiful.