Biologists call for action as plant spreads into Maryland

Plunge your hand beneath the surface of the water. Grasp the purplish shoots firmly and yank upward. The water chestnut plant (Trapa bispinosa) should emerge from its mooring largely intact with little difficulty.

Easy, right? Now do it over and over again until you’ve removed the aquatic weed across a span roughly the size of a football field. (Maybe more.) Then, it’s time to work on dozens of other lakes and ponds with documented infestations — all while racing against the plant’s spread into new waters.

That’s the type of challenge that water chestnut foes are facing in Northern Virginia. So far, it’s proving more than they can handle.

Since 2020, the number of active water chestnut colonies has grown from 54 to 81 as newly discovered sites outpace the places where eradications efforts have succeeded.

And the plant has escaped its confines around the Virginia suburbs of the District of Columbia. This summer, observers for the first time spotted the invader in a pair of far-flung locales: nearly 200 miles to the south in Charlotte County, VA, and 30 miles to the northeast in Prince George’s County, MD.

But there is cause for optimism, she said. A couple of years ago, Rybicki felt nearly alone in the battle against the water chestnut. Now, a loose network of volunteer organizations and government agencies has joined the cause, collectively working to acquire dedicated staffing, more funding and stronger regulatory tools. 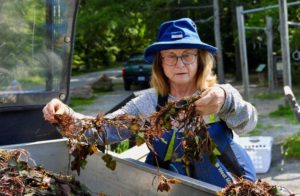 The Northern Virginia Soil and Water Conservation District recently obtained about $300,000 from Fairfax County’s Environmental Improvement Program to fund a staff position to oversee eradication in at least 30 ponds countywide. That amount also covers the cost of contractors to do the work.

Meanwhile, the National Capital Partnership for Regional Invasive Species Management (PRISM) is seeking a $1.8 million U.S. Fish and Wildlife Service grant to fund treatments on privately owned ponds. As things stand, many property owners can’t afford to quell water chestnut infestations on their own, said Sara Tangren, the coordinator of the PRISM chapter.

“We know it can get out of ponds and get into slow-moving tidal waters,” she said. “If we don’t get the funding to take care of this, it’s just going to cost a whole lot more” in the future. This clump of invasive water chestnut was removed from Burke Lake in Fairfax County, VA. by Whitney Pipkin

Another branch of the fight may be on the verge of bearing fruit. The Virginia Noxious Weed Advisory Committee nominated the water chestnut to be designated as a Tier 2 weed in 2019. The Attorney General’s Office is reviewing the proposal.

If added to that list, the Virginia Department of Agriculture could tap its own resources to suppress populations or reduce its spread, said agency spokesman Michael Wallace. The classification also would prohibit the movement and sale of those plants into or within the state without a permit.

To John Odenkirk, the water chestnut is the “evil weed.” The biologist with the Virginia Department of Wildlife Resources discovered the beginnings of the current outbreak in Pohick Bay along the Potomac River in 2014. With Rybicki’s help, the plant was identified as a native of East Asia — not the edible variety and not the same type that blanketed much of the Potomac in the 1950s. 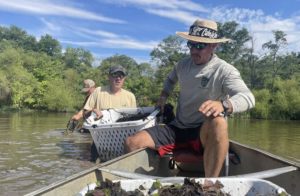 John Odenkirk, a biologist with the Virginia Department of Wildlife Resources, gathers baskets of invasive water chestnut into a canoe as a team works to remove the plants from Burke Lake in Fairfax County. by Whitney Pipkin

The fast-growing plant began spreading throughout Northern Virginia. But as invasive hunters grappled with issues over jurisdiction and funding, they clung to one positive sign: The immediate area around the infestation’s Fairfax County epicenter remained the only place where the water chestnut had been found in the U.S.

“I know everyone has invasive fatigue, but this one could be really bad if it breaks open,” Odenkirk said.

Once established, a colony can smother an entire pond or lake. The dense mats can block the passage of oxygen in the atmosphere to the water below and create oxygen-starved expanses where aquatic life is all but nonexistent, experts say. The plant’s long tendrils also impede boat navigation. 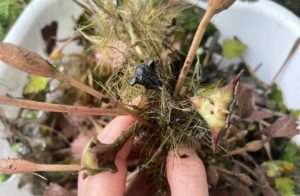 The water chestnut plague hasn’t quite broken open, but this year’s long-distance jumps to southern Virginia and central Maryland are worrying, Odenkirk said. He suspects Canada geese are to blame. The plant’s seed pods are adorned with opposing hook-like horns, which can latch “like Velcro” onto feathers, clothing and other surfaces, he explained.

He said that he hopes that his agency will receive a grant later this summer to fund a position for three years to coordinate volunteers and contractors in efforts to locate and eradicate invasive species, including the water chestnut.

A water chestnut-pulling event at Fairfax County’s Burke Lake Park in late July illustrated the difficulties that lie ahead. 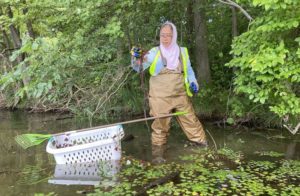 “It’s like something from the Upside Down,” said Casey Pittrizzi as his gloved hand emerged from the lake with a tangled clump of spade-shaped green leaves and purple roots. His reference was to the otherworldly alternate dimension in the Netflix show Stranger Things.

“Luckily, it’s relatively easy to pull up. I think I got pretty much most of it when I pulled it up,” said Pittrizzi, a Fairfax County Park Authority staffer on loan for the day from another park. “At least here it’s not everywhere, which is why we’re trying to hit it now.”

About two dozen people worked for several hours around the rim of the lake — some from kayaks, others clad in hip waders around the shore. Their affiliations ranged from state biologists to summer Park Authority wage earners. They filled white plastic laundry baskets with water chestnut plants and bottom gunk and hauled them ashore. 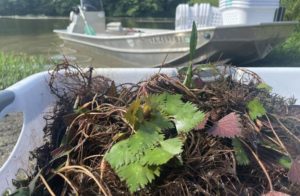 A basket is filled with invasive water chestnut removed from Burke Lake in Fairfax County, VA. More baskets stacked in a nearby boat are waiting to be filled. by Whitney Pipkin

To spray herbicides certainly would be easier, Odenkirk acknowledged. And it’s been done for the water chestnut. But the chemicals can drift downstream, harming other aquatic life. Experts also point out that the dying plant material tends to simply drift to the bottom, providing a ready source of nutrients for the next outbreak.

What Odenkirk initially estimated would be one day’s work, though, soon overflowed to two. The main problem: He had estimated the size of the outbreak at about a half-acre at the start of the month, but it had grown in the summer heat to at least twice that size in the intervening three weeks.