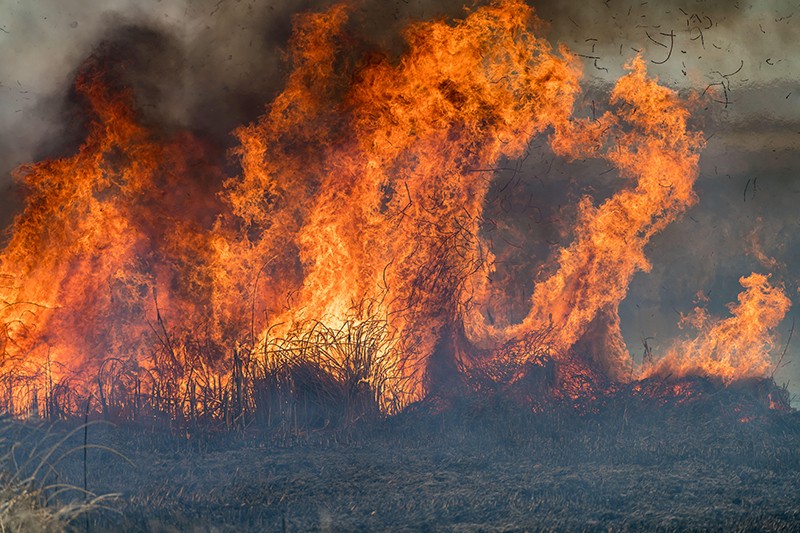 A collaboration between scientists and Native American tribes finds tree density in parts of the Klamath Mountains is at a record high, and at risk of serious wildfires.

Controlled fires can be used to reduce the risk of wildfires. Credit: David Hoffmann/Alamy

Indigenous oral accounts have helped scientists to reconstruct a 3,000-year history of a large fire-prone forest in California. The results suggest that parts of the forest are denser than ever before, and are at risk of severe wildfires1. The research is part of a growing effort to combine Indigenous knowledge with other scientific data to improve understanding of ecosystem histories.

Wildfires are a substantial threat to Californian forests. Clarke Knight, a palaeo-ecosystem scientist at the US Geological Survey in Menlo Park, California, and her colleagues wanted to understand how Indigenous communities helped shape the forest by managing this risk in the state’s lush western Klamath Mountains. Specifically, they studied Indigenous peoples’ use of cultural burning — small, controlled fires that keep biomass low and reduce the risk of more widespread burning. The results are published in the Proceedings of the National Academy of Science.

“When I was a little kid, my grandmother used to burn around the house,” says Rod Mendes, fire chief for the Yurok Tribe fire department, whose family is part of the Karuk Tribe of northern California. The Karuk and Yurok tribes have called the Klamath Mountains home for thousands of years. “She was just keeping the place clean. Native people probably did some of the first prescribed fire operations in history,” says Mendes.

Understanding how Indigenous tribes used fire is essential for managing forests to reduce wildfire risk, says Knight. “We need to listen to Native people and learn and understand why they managed the landscape the way they did,” adds Mendes.

To map the region’s forest history, the team drew on historical accounts and oral histories from Karuk, Yurok and Hoopa Valley Tribe members collected by study co-author Frank Lake, a US Forest Service research ecologist in Arcata, California, and a Karuk descendant, as part of his PhD thesis in 2007. These accounts described the tribes’ fire and land use. For instance, members lit small fires to keep trails clear; this also reduced the amount of vegetation, preventing expansion of wildfires from lightning strikes. Larger fires, called broadcast burning, were used to improve visibility, hunting and nut-harvesting conditions in the forest. The effects of fire on the vegetation lasted for decades.

Knight says that it was important to collaborate with the tribes given their knowledge of the region. The Karuk Resources Advisory Board approved a proposal for the study before it began. “In a way, it’s decolonizing the existing academic model that hasn’t been very inclusive of Indigenous histories,” says Lake.

The researchers also analyzed sediment cores collected near two low-elevation lakes in the Klamath Mountains that are culturally important to the tribes. Layers of pollen in the cores were used to infer the approximate tree density in the area at various times, and modeling helped date the cores so they could estimate how that density changed.

The team also measured charcoal in the cores’ layers, which helped to map fluctuations in the amount of fire in the region. Burn scars on tree stumps pointed to specific instances of fire between 1700 and 1900. Because the stumps’ rings serve as an ecological calendar, the researchers were able to compare periods of fire with corresponding tree-density data. They then pieced together how this density fluctuated with fire incidence. Although these empirical methods could not specifically confirm that the fires were lit by the tribes, patterns suggested when this was more probable, says Knight. For instance, increased burning in cool, wet periods, when fires caused by lightning were probably less common, suggested a human influence.

Combining multiple lines of evidence, Knight and her team show that the tree density in this region of Klamath Mountains started to increase as the area was colonized, partly because the European settlers prevented Indigenous peoples from practicing cultural burning. In the twentieth century, total fire suppression became a standard management practice, and fires of any kind were extinguished or prevented — although controlled burns are currently used in forest management. The team reports that in some areas, the tree density is higher than it has been for thousands of years, owing in part to fire suppression.

A dense forest isn’t necessarily a healthy one, says Knight. Douglas firs (Pseudotsuga menziesii), which dominate the lowland Klamath forests, are less fire resilient and more prone to calamitous wildfires. “This idea that we simply should let nature take its course is just not supported by this work,” she says. She adds that one of the study’s strengths is the multiple lines of evidence showing that past Indigenous burning helped to manage tree density.

Fire ecologist Jeffrey Kane at the California State Polytechnic University Humboldt in Arcata says that the study’s findings of increased tree density are not surprising. He has made similar observations in the Klamath region. “There’s a lot more trees than were there just 120 years ago,” he says.

Dominick DellaSala, chief scientist at forest-protection organization Wild Heritage in Talent, Oregon, points out that the results suggesting record tree densities cannot be applied to the entire Klamath region, owing to the limited range of the study’s lakeside data.

Knight, however, says that the results can be extrapolated to other similar low-elevation lake sites that have similar vegetation types.

Palaeoecology studies are increasingly incorporating Indigenous knowledge — but there’s still a long way to go, says physical geographer Michela Mariani at the University of Nottingham, UK. In Australia, Mariani has also found that tree density began to increase after British colonization hampered cultural burning. “It’s very important that we now include Indigenous people in the discussion in fire management moving on,” Mariani says. “They have a deeper knowledge of the landscape we simply don’t have.”

Including Indigenous voices in research is also crucial for decolonizing conventional scientific methods, Lake emphasizes. It “becomes a form of justice for those Indigenous people who have long been excluded, marginalized and not acknowledged”, he says.