Home | Tree News | I climbed one of Seattle’s biggest trees. Here’s why 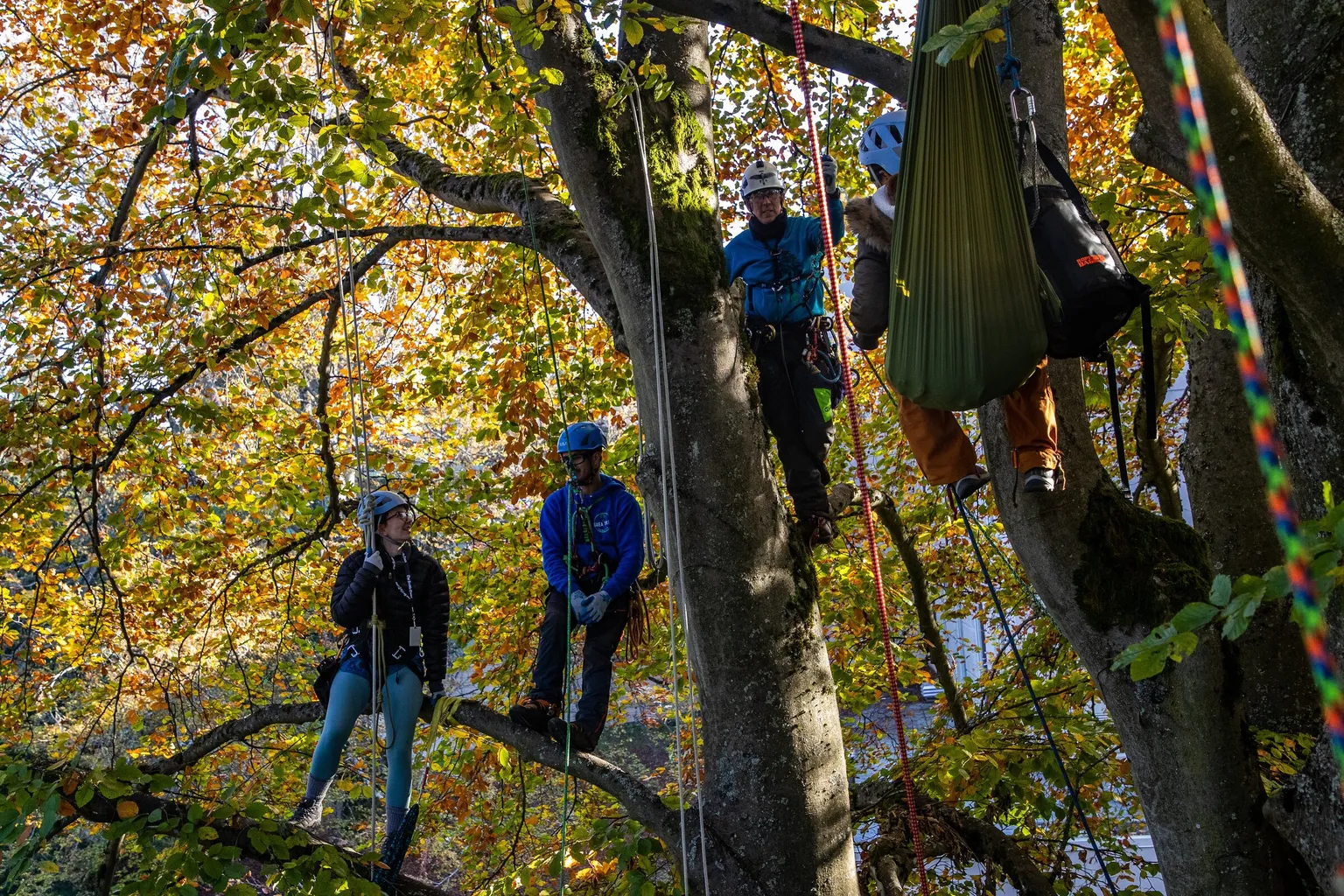 By the grace of a carabiner, harness and a sturdy rope, I gently swung in the breeze, hidden within the crown of the towering European beech tucked behind the Seattle Asian Art Museum at Volunteer Park on Sunday afternoon.

It’s one of Seattle’s largest trees by volume, the arborists tell me, with a trunk spanning nearly 6 feet across.

It wasn’t until guide Noel Rodriguez instructed me to stand on a branch a few — or many — dozen feet up that I confessed I was afraid of heights. My feeling of terror brought joy to David Anderson, executive director of Canopy Watch, who was harnessed in just a few feet away.

Anderson gives a TED talk on the “transformative power” of climbing trees. He leads these climbs, essentially pushing people out of their comfort zone for a living.

“This is what happens, Isabella,” he told me after the climb. “People come to the trees and they look nervous. There’s tension in their face. And their posture is usually closed. But, when they come to the ground. You’re beaming with this big smile.”

Anderson organized a day of tree climbing Sunday, inviting forestry leaders to get up in the crown ahead of the Partners in Community Forestry conference in the city this week. He wanted attendees — urban forestry leaders, advocates and researchers — from around the world to feel the “electric buzz” from within the tree before the event starts. 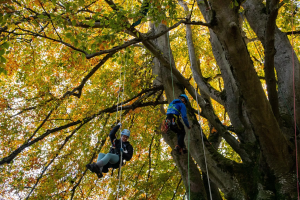 There are some things that can’t be seen by just craning your neck to look at the tree tops, Anderson told me.

Midway up the tree, I shuffled my clunky boot-laden feet off the branch, released my shaky grasp from a white rope and shifted my weight into a blue speckled hammock. It was tightly stretched between two branches dotted with moss.

Burnt orange leaves rustled in the gentle winds. Some shook loose and drifted toward the soft earth beneath.

Blue sky peeked through holes in the dense canopy, and the afternoon sun in the west illuminated the round leaves.

Some already had released their chlorophyll, exchanging their lustrous dark green glow for autumnal shades of copper, crimson and maroon. One crunchy leaf oscillated back and forth until it came to rest on my puffer jacket.

On my way there, it was hard to observe much beyond the ascent itself. My arms were fatiguing more and more each time I pulled, and my legs ached from the unforgiving harness straps supporting them.

Beneath my dangling hiking boots, families walking through the park continued to shrink and disappear from view. Leaves provided shade and helped camouflage myself and others climbing nearby. 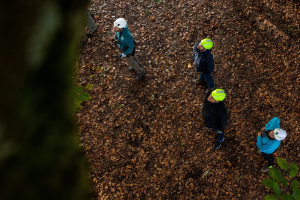 People look up from the ground. (Kylie Cooper / The Seattle Times)

The bark was mostly smooth, but some ridged ribbons of texture danced around the trunk as I swung in my harness between heaving pulls toward the top.

Not far across the pathway, more urban forestry leaders were pulled up a towering pine by an “elevator system.” Anderson texted me a photo he had received from Scott Baker, of Tree Solutions, of the hazy amber sunset lighting up the rigid city towers between the dense spiky needles. 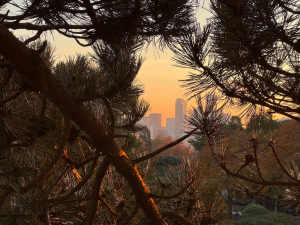 This was the skyline view from a nearby tree, which was also climbed on Sunday in Volunteer Park. (Courtesy of Scott Baker / Tree Solutions)

Earlier that morning, I hid with a white envelope the cover of a December 2012 copy of National Geographic that has been sitting on the coffee table in my Everett apartment for months. It showed a scientist suspended by not much more than a rope has one boot perched on the rusty red bark of “The President,” one of the giants in Sequoia National Park.

Looking at the man hanging alongside one of the world’s largest trees made my palms sweat.

But just hours later, Rodriguez successfully urged me to continue climbing to ring the cowbell, marking the top of my rope about 60 feet up.

He was one of the many arborists helping newbies get up the tree. He swung from branch to branch in fluid movement.

The beech was his playground. He found a sunlit branch to perch on as I asked him about his profession. He lives and breathes trees — as we all do, he said. When he’s not at work, he’s looking for a tree to climb.

“You get a different perspective about trees,” he said. “ … It’s important to see how big they are, how magnificent they are. And we are just so small. Sometimes we don’t see what we have in our own backyard.”

When I neared the top, Craig Bachmann greeted me. The arborist with Tree 133 used one foot tucked behind him as an anchor on the branch toward the tree’s top.

The towering beech is a tangible example of carbon sequestration, he said, taking the compound from the air, turning it into wood, providing shade and clean air.

“It’s hard to really fully appreciate what a tree is until we’re inside of it,” he said. “And we realize the scope and scale and majesty of these incredible organisms.” 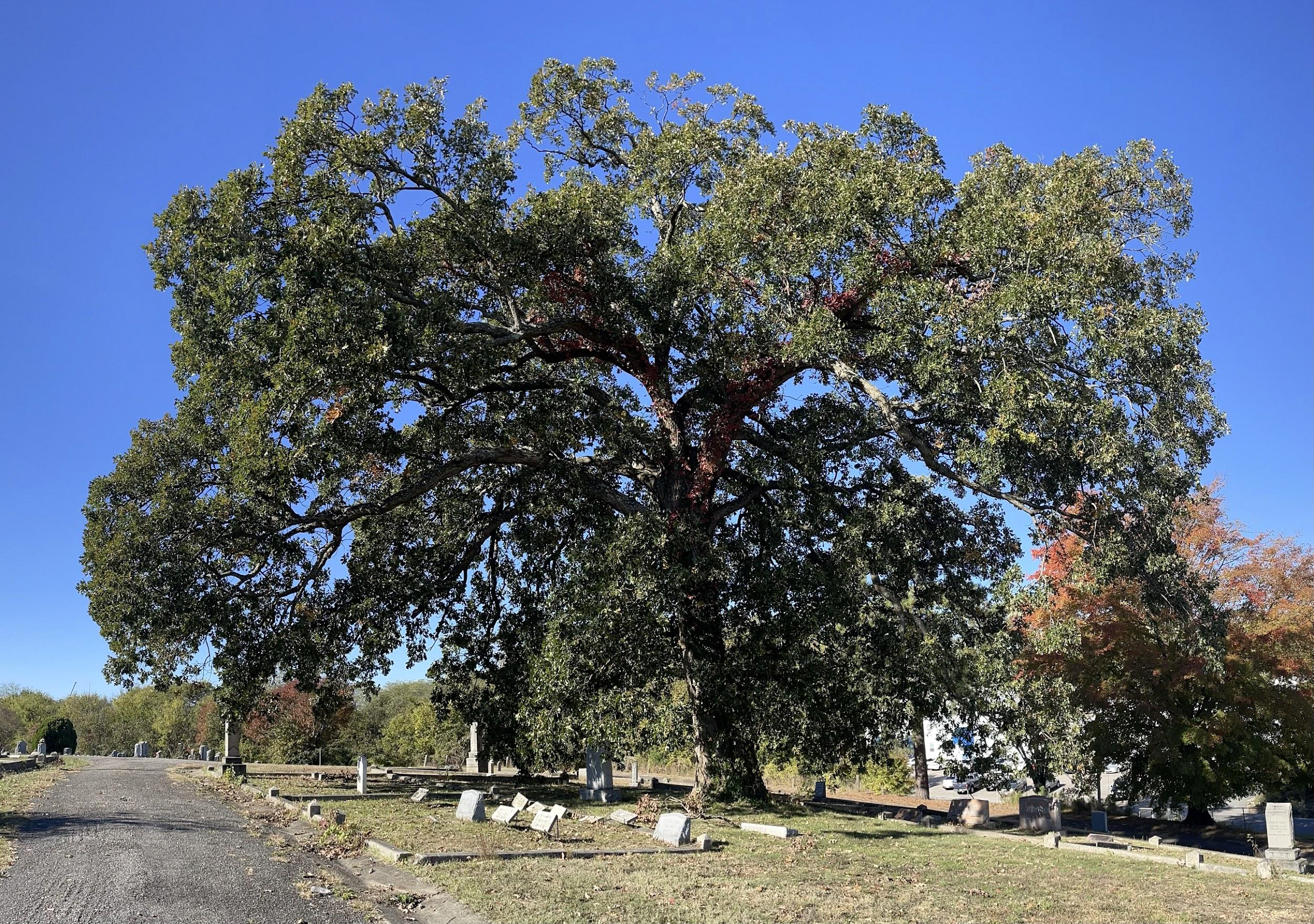 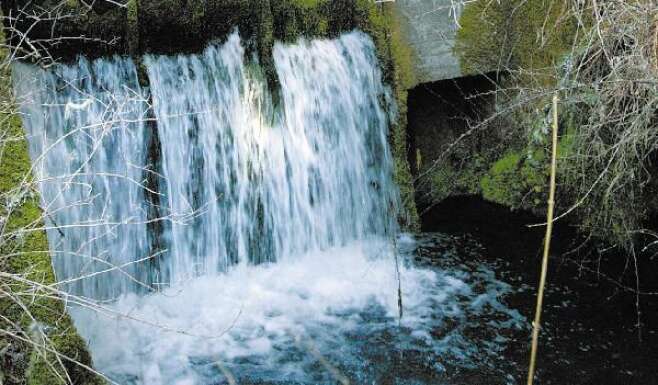