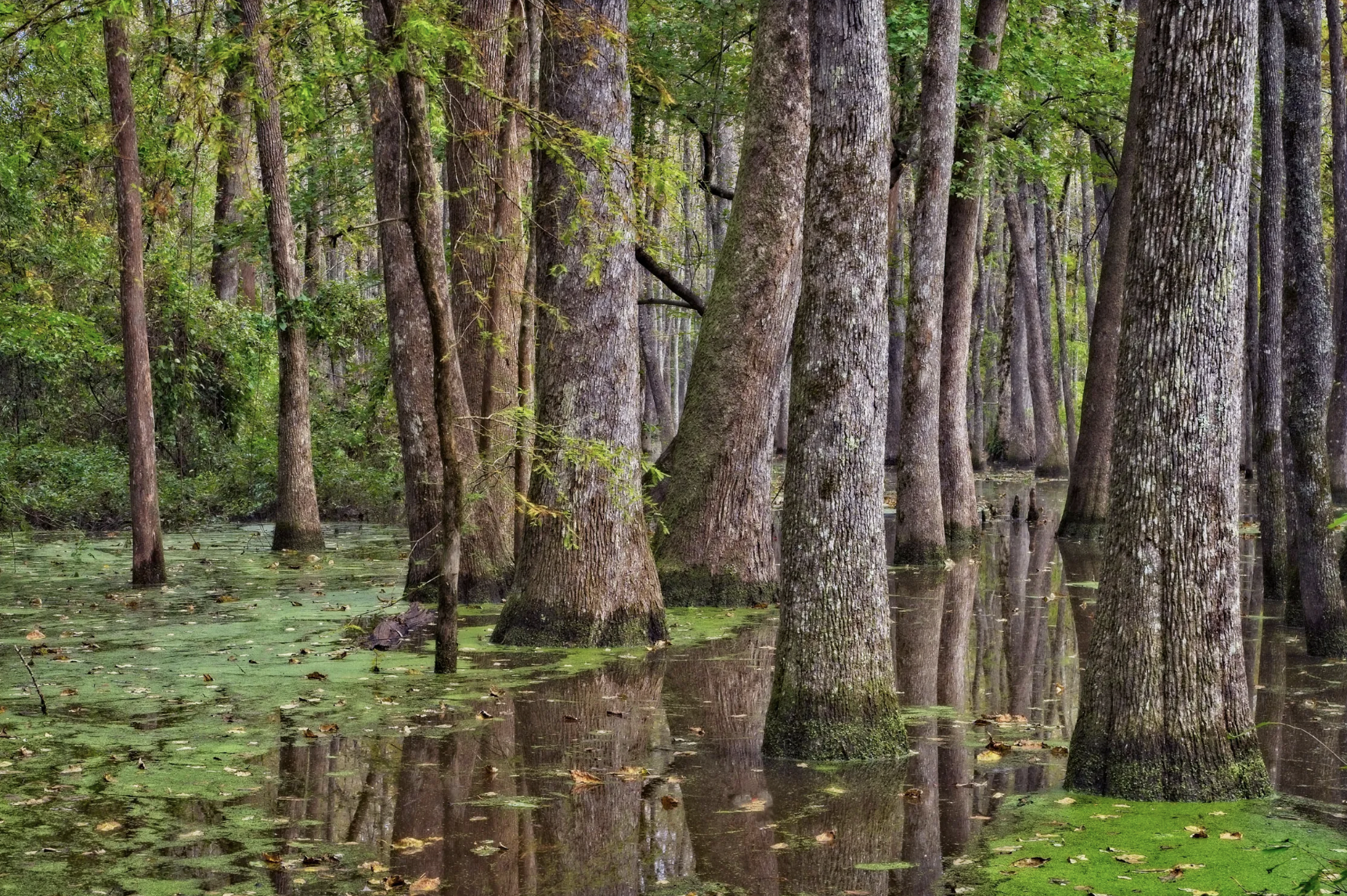 Bad news: Trees emit methane, a greenhouse gas. Good news: Some are home to bacteria that can’t get enough of it.

MANY OF TODAY’S geoscientists are carbon voyeurs. Knowing that human disregard for the carbon cycle has screwed the climate, they have kept a close eye on carbon’s hottest variants—carbon dioxide (CO2) and methane. Both gasses trap heat on the planet through the greenhouse effect, and over a span of 100 years, methane is 28 times more potent than CO2. Rigorously accounting for greenhouse gas flow is step one of building models that predict the future climate.

Some line items in the methane budget, such as pipeline leaks and cow farts, are well understood. But others are hazier. “There’s lots of gaps and uncertainties, particularly in wetlands, and inland waters,” says Luke Jeffrey, a biogeochemistry postdoc at Southern Cross University in Australia. By one 2020 tally from the Global Carbon Project, wetlands emit about 20 to 31 percent of Earth’s annual methane release—more than the amount from fossil fuel production.

But in the past decade, researchers have zeroed in on a perhaps counterintuitive source of greenhouse gas emissions: trees. Freshwater wetland trees, in particular. Trees bathing in wet or flooded soil absorb methane and then leak it through their bark. In a 2017 study, ecologist Sunitha Pangala, then at the Open University in the United Kingdom, found that trees in the Amazon were responsible for 200 times more methane than trees in other wetland forests, accounting for 44 to 65 percent of the region’s total emissions.

Does this mean trees are bad for the planet? Of course not. Trees suck carbon dioxide out of the atmosphere. And in a study published April 9 in Nature Communications, Jeffrey and his team report how trees can also be methane sinks, sheltering microbes that convert it to the less damaging CO2. His team discovered methanotrophs, or methane-eating microbes, in a species of trees called paperbarks, which grow in eastern Australian swamps. The microbes gobble up methane, reducing the trees’ potential emissions by about a third. The finding brings more clarity to how trees factor into the elusive methane budget that experts say is vital for climate predictions.

“This is an important contribution and one that’s timely,” says Patrick Megonigal, a biogeochemist with the Smithsonian Environmental Research Center who is not affiliated with the study. Megonigal has researched the release of methane from trees for over a decade, and is an expert in the flows of greenhouse gases throughout wetland and upland forests.

“When I saw this paper, I just said, ‘Holy shit, this is really interesting,’” says Jeffrey White, a professor emeritus at the O’Neill School of Public and Environmental Affairs at Indiana University. White, who was not involved in the study, has studied methane cycling for over 30 years and says it elegantly addressed a hunch that researchers have had—but haven’t been able to nail down—that methanotroph activity occurs in tree bark. He calls the work “profoundly important.”

Methanotrophs are everywhere and have been for as long as atmospheric oxygen has existed on Earth, so White is confident this isn’t an isolated case: He’s noticed similar behavior in Minnesota birch trees.

Wetlands contribute more methane to the atmosphere than any other natural source. But without methanotrophs, they’d release an estimated 50 to 90 percent more. These microbes turn methane into carbon dioxide similar to the way combustion does. The process is, almost literally, a slow burn. But it prevents a majority of wetland methane from reaching the sky, making soil a source and a sink. Far less is known about the methane feasts taking place inside trees.

Jeffrey wanted more clarity. A few years ago, his attention turned to the paperbarks. “It’s such a unique tree with amazing layers of bark,” Jeffrey says. These layers are moist, dark, and known to contain methane. (Jeffrey sometimes refers to it as “treethane.”) “We just thought it could be an ideal spot for methanotrophs,” he continues. So he set out to prove that the gas-eating microbes were hiding there. Jeffrey designed a series of experiments that would cater to their appetites. First, he sliced bark from trees in three wetland sites and sealed those strips inside glass bottles containing methane. Then, he waited. Over a week, he measured as the methane levels in the bottles dropped. In some samples, more than half of it vanished. In control bottles that contained either sterilized bark or nothing at all, methane levels remained paper-flat.

Jeffrey’s team also knew that methanotrophs have picky palates. Methane’s one carbon atom can exist as either of two stable isotopes: the classic carbon-12 or the heavier carbon-13 that lugs around an extra neutron. Carbon-13’s bonds are harder to break, so methanotrophs would rather snack on the lighter isotope. Jeffrey’s team found that the relative levels of carbon-13-methane in the bottles increased with time. Something in the bark was alive and selectively eating, like a kid leaving the yellow Starbursts in the bag after picking out the pinks.

Encouraged by these traces of activity, they sent bark across town to the microbiologists at Monash University, who ran a microbial analysis of all of the species that were living in the bark. The verdict: Paperbark samples contained a bustling unique population of bacteria not found in the surrounding soil or swamp, most of which fall into the methane-hungry genus Methylomonas.

But all of those results arose in a lab, and Jeffrey’s team needed to see how real, live trees behave, specifically how fast they leak methane. They waded through a wetland forest in New South Wales, gently attached sealed chambers and spectrometers to the sides of paperbarks, and measured how much the trees emitted per second.

Then Jeffrey injected a gas called difluoromethane into the chamber. Difluoromethane is a sneaky treat for methanotrophs—it temporarily inhibits their appetite. “It actually stops them consuming methane,” Jeffrey says. After letting the gas diffuse in for an hour, Jeffrey flushed it and reexamined the emissions. Because the microbes stopped eating, methane levels jumped. On average, the team calculated, microbes had been removing 36 percent of the methane that would otherwise seep into the atmosphere.

Most of that methane actually originates in the wet soil, Jeffrey says. Microbes digest organic matter in the dirt and release methane. Some burbles out of the soil or water, but some flows up through tree roots like they’re straws, or soaks into the bark then diffuses out through the wood. (Different microbes can also make their own methane within the tree, but Jeffrey has published evidence that isotope signatures of the methane in bark matches that in the soil.) Thanks to the tree-dwelling microbes, less of it gets released into the atmosphere as methane, because they transform it into less harmful CO2. “This methane in soil is possibly going to come up anyway from a wetland. If they’re coming up through trees, they have to get through this gauntlet of bacteria,” says Jeffrey. “So this new discovery—I’m kind of looking at trees now as almost like methane filters.”

“It’s really exciting for me, because this has been a question that I’ve been interested in for a long time,” says Mary Jane Carmichael, a microbial ecologist at Hollins University in Virginia not involved in the study. Carmichael reported in a 2017 study that dead trees emit methane, too. (Similarly, in a previous study, Jeffrey showed that dead trees emitted eight times the methane of living ones.) “I’m never really surprised by what microorganisms are capable of,” Carmichael says. “We probably will see that it’s a pretty widespread phenomenon.”

Understanding how trees add and subtract methane from the environment will help scientists adjust a sort of planet-wide carbon calculus. While satellite data helps track emissions from above, finer details for each source and sink are essential to really make predictions, says Marielle Saunois, an environmental scientist with the University of Versailles Saint Quentin who coordinates the Global Methane Budget. But this study won’t change climate models right away. “The processes are important but very local,” she says. It’s hard to scale up bark microbe effects to a global or even regional perspective. And while this work helps predict how wetland emissions change with climate, global models don’t yet include these feedback effects. “Ideally,” she says, “it should.”

“Vegetation and plant-based pathways in methane emissions are actually a really under-studied component of the global methane budget,” agrees Carmichael.

Earth’s climate behavior is rife with feedback loops: For example, temperature, moisture, and CO2 affect how tree species are distributed, which affects methane emissions, which affects climate, and so on. Knowing that these microbes exist—and future studies that can pinpoint where else they exist—will improve climate predictions by making methane models more robust.

“This is good news,” says Megonigal. In wetland forests that are rich in methane, the microbes buffer emissions. In drier upland forests that produce less methane, he says, “they might actually be removing methane from the atmosphere on our behalf.”

Jeffrey next plans to examine how the trees’ filtering of the greenhouse gas changes with the seasons. Since he published the study, people have pitched him a variety of ideas for how to harness forest methanotrophs for climate action. Could scientists inoculate other tree species with the microbes to establish methane-gobbling forests? Could we culture them in sawdust and spray them on forest floors? Could we feed them to cows? “I have no idea, to be honest,” Jeffrey says. “And my personal preference is not to tinker with nature too much.”

And, he points out, human help might not even be needed to spread methanotrophs around: “I’m assuming—and hoping—that we’ll probably find these guys living elsewhere, in other trees, too.”