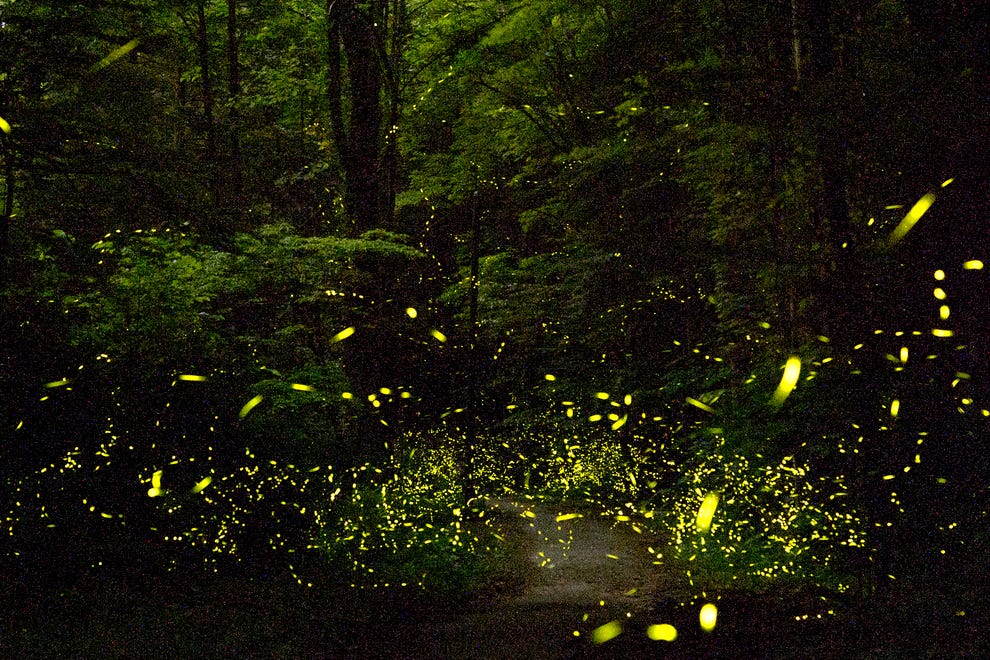 Are on the trees, the fireflies

Around the house with flowers.

In November, I wait and watch for the migratory buffleheads to arrive on the James, above and below the Z Dam. Usually, they’ve begun their antic foraging dives by Thanksgiving, but no later than the first week of December.

In late May I look for another there-and-gone creature: the firefly, or lightning bug if you prefer. There are 2,000 species of fireflies worldwide, including the synchronous Photinus carolinus, one of 19 species native to Great Smoky Mountains National Park. It’s Photinus pyralis, the common eastern firefly, you see in yards and parks in Richmond. Fireflies belong to the order Coleoptera and the family Lampyridae; they are beetles, not flies. Their bioluminescent communication results from a complex chemical conversion of energy into light. Firefly adulthood lasts a matter of weeks, long enough to mate and lay hundreds of eggs. But the larvae live one to two years under bark and in soil, leaf litter, and other organic rot before pupating in the warm, humid conditions of spring.

On April 29th I saw a single member of the advance guard, which is not unusual. I knew at least a month would pass before the flashes in our yard multiplied. Then came a nearly record-breaking dry May with just 0.6 inches of rain over 30 days. The month started out warm, but the second half turned much cooler. As each evening turned into a firefly no-show I began to wonder if the weather had made for a firefly bust. The beginning of June brought rain and plenty of it, but was it too late? Had the critical window for firefly pupation from larvae to adults slammed shut?

Skimming the internet suggested that yes, since firefly metamorphosis into adulthood depends on wet, warm conditions, Richmond’s weather may have impacted maturation of larvae as well as their primary food source—snails and slugs. I adjusted my expectations, and we went to Highland County for a long weekend where in the dusk the fireflies rose from the grassy fields into the tree tops to mingle with the emerging stars.

As of June 13th, my own wooded yard was hosting just a smattering of fireflies, far fewer than in past years, and I’d yet to come across any at rest on vegetation in the daytime as I usually do. I next queried Richmond’s own renowned beetle expert, entomologist Dr. Art Evans, who observed that, “the relatively cool, dry weather thus far this season might have dampened firefly activity in some areas”, but that just miles across the river on Richmond’s northside—as well as elsewhere in the state—he was experiencing greater abundance of fireflies than he had in years. So anecdotally, it seems that there can be significant local variations in firefly population size and emergence timing, perhaps a result of differences in habitat conditions.

The tide turned on June 19th. Dusk brought at least a tripling of levitating sparks, which doubled a few nights later. My son and I wandered the yard, following the fireflies’ lead, then sat and took in the hypnotic show.  It seems that all I needed was the patience of fireflies.

If fireflies are an uncommon sight for you in Richmond regardless of the year, you might be wondering why. Dr. Evans further noted, “Drought, loss of good plant cover, pesticide use, and light pollution all take their toll on urban and suburban firefly populations.”

Mowing, blowing, and chemically treating a yard decimate habitat. Dusk to dawn artificial light is a habitat disruptor for all species, most dramatically for the nocturnal. In the case of fireflies, those bioluminescent signals from males to females only work in naturally falling darkness.  Light pollution is a factor in overall diminishing insect diversity and abundance, and its impact on fireflies is a particular area of research.

So leave the leaves and allow for a less manicured yard favoring native plant species, including grasses. Improve your home outdoor lighting, and consider becoming an advocate for responsible lighting policies and practices that are better for our environment—natural and built—and for every living thing, including fireflies and us.