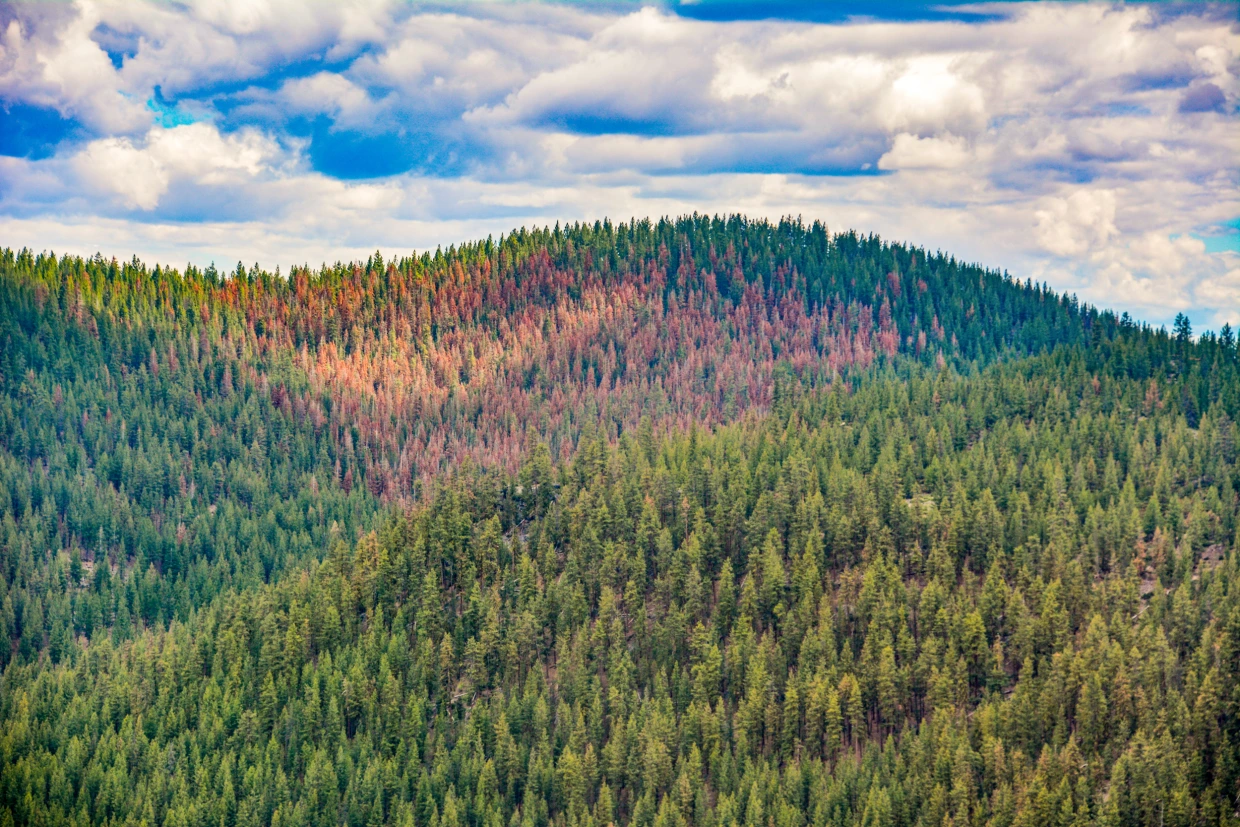 Oregon’s dead firs are a visceral example of how drought is reshaping landscapes in Western states that have been experiencing extreme heat conditions.

Drought-stricken Oregon saw a historic die-off of fir trees in 2022 that left hillsides once lush with green conifers dotted with patches of red, dead trees.

The damage to fir trees was so significant researchers took to calling the blighted areas “firmageddon” as they flew overhead during aerial surveys that estimated the die-off’s extent.

The surveyors ultimately tallied about 1.1 million acres of Oregon forest with dead firs, the most damage recorded in a single season since surveys began 75 years ago.

Oregon’s dead firs are a visceral example of how drought is reshaping landscapes in Western states that have been experiencing extreme heat conditions. In many areas, these firs might be replaced by more drought-hardy species in the future, reshaping how ecosystems function and changing their character.

“When I looked at it and crunched the numbers, it was almost twice as bad as far as acres impacted than anything we had previously documented,” said Danny DePinte, an aerial survey program manager for the U.S. Forest Service. “Nature is selecting which trees get to be where during the drought.” 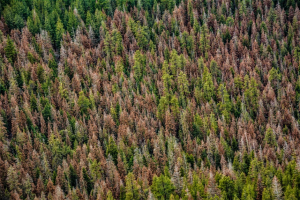 Fir die-off as observed during this year’s aerial survey in the Fremont-Winema National Forest in southern Oregon.Daniel DePinte / USFS

Oregon is known for towering volcanic domes covered by a blanket of conifers that becomes sparse and patchwork on the eastern side of the Cascade Mountains before it tucks into the high desert.

The people who know the trees best say there are many signs of problems in Oregon.

“We’re seeing forms of stress in all of our species of trees,” said Christine Buhl, a forest entomologist with the Oregon Department of Forestry. “We just need to shift our expectations of what tree species we can expect to be planted where.”

Researchers have been surveying Pacific Northwest forests by air since 1947. Little about the process has changed during that time, according to Glenn Kohler, an entomologist with the Washington State Department of Natural Resources, which operates the program alongside the U.S. Forest Service and Oregon Department of Forestry.

Each summer, small high-wing planes soar about 1,000 feet above the tree canopy at about 100 mph. Trained observers peer outside both sides of the plane, looking for noticeable damage to trees.

Dead trees — conifers that are completely red or orange — are the easiest to spot, but the observers can also pinpoint trees that are barren of needles in some areas.

The observers rate the intensity of damage and map its location. Pilots fly in a grid pattern with flight lines about 4 miles apart to cover every swath of the forest.

“It’s literally like mowing the lawn,” Kohler said of the flight trajectory.

Paper maps of the past have been replaced today by Samsung Galaxy tablets that track the plane’s progress and make mapping easier — and probably more accurate.

Observers require a season of training, Kohler said. It can be a dizzying task. 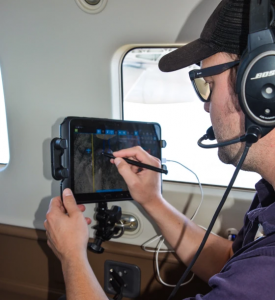 Brent Oblinger, a plant pathologist on the Deschutes National Forest, while in the process of conducting a portion of the survey. USFS

“We’re analyzing 16-30 acres per second,” DePinte said, noting that small planes can offer a more turbulent ride. “You definitely have to have a stomach of steel.”

This year, the aerial observation program flew over about 69 million acres of Washington and Oregon forest in about 246 hours.

The scale of damage in Oregon, which was first reported by the environmental journalism nonprofit Columbia Insight, was staggering to the researchers and begs for a more thorough study.

“We had never seen anything to this level,” DePinte said. “It sets you back and makes you pause. Your scientific mind starts questioning why. We don’t always have the answers.”

Trees are susceptible to bark beetles, root diseases and defoliators like caterpillars. Aerial surveys help researchers capture the booms and busts of these pathogens.

Healthy trees typically can defend themselves against these threats. When beetles drill into a trees’ bark, for example, a healthy tree can push the beetles out by excreting pitch, a gooey substance, where they entered the tree, Kohler said. 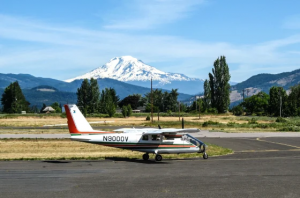 Each summer, small high-wing planes soar about 1,000 feet above the tree canopy at about 100 mph, trained observers peer outside both windows of the plane, looking for noticeable damage to trees. USFS

ut disturbances like drought, wildfire and windstorms can stress trees and weaken their defenses. Large numbers of dead and dying trees could allow bark beetles to lay eggs, feed their larvae and flourish.

Scientists still only have a coarse understanding of the factors that are causing widespread die-offs in Oregon, but many view drought as the underlying culprit.

“There are multiple factors at play here. One of the things most of us agree on: The primary factor we have going on here is hot drought,” Buhl said, meaning that the state has been hampered by higher-than-normal temperatures and also low precipitation.

DePinte said damage was most pronounced in White, Shasta and Red firs on the eastern side of the Cascade Mountain range’s crest, where the climate is drier.

Nearly half of Oregon is experiencing severe, extreme or exceptional drought, according to the U.S. Drought Monitor. The drought is worse in eastern Oregon.

Oregon’s average temperatures have risen about 2.2 degrees Fahrenheit since 1895, according to a 2021 state climate assessment delivered to the state’s Legislature. The severity of drought has increased over the past two decades in part because of human-caused climate change, the report says. Summers in Oregon are expected to become warmer and drier.

“We’ve been hearing about climate change for some time. Climate change is happening. We’re now feeling it,” Buhl said. “These summers are getting warm and long. We’re seeing evidence on the landscape. We needed to pay more attention decades ago, but we didn’t.”

Buhl said impacts to forest health are taking out roughly as many trees as wildfires, which are also now  more likely and more intense by climate change.

Heat waves are a growing threat, too. On Oregon’s west side, trees were scorched by the June 2021 heat dome, which sent Portland’s temperature as high as 116. Scientists have said the intense heat wave was “virtually impossible” without climate change. 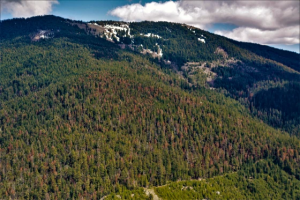 Fir die-off as observed during this year’s aerial survey in the Fremont-Winema National Forest in southern Oregon. USFS

Aerial assessments last year documented nearly 230,000 acres of heat scorch across Oregon and Washington, DePinte said. Most of the damage was on hillsides with south-facing aspects that soak up more sunlight because of the sun’s angle in the sky.

“It was the combination of the high temperatures in the afternoon with the sun boring down,” said Chris Still, a professor in the College of Forestry at Oregon State University. “We think a lot of those leaves just cooked in place.”

Still speculated that the heat dome could have contributed to this year’s fir die-off, also, but more research and evidence is needed to examine any possible connection.

DePinte said the 2021 scorching was the largest ever recorded, which means the Pacific Northwest has now seen two events of record-breaking damage in its forests in as many years.

CORRECTION (Dec. 12, 5:18 p.m. ET): A photo caption in a previous version of this article misidentified a researcher. The photo is of Robert Schroeter, not Brent Oblinger. The photo has been replaced.