Edible RVA: A Foraging Foray In Our Urban Forest 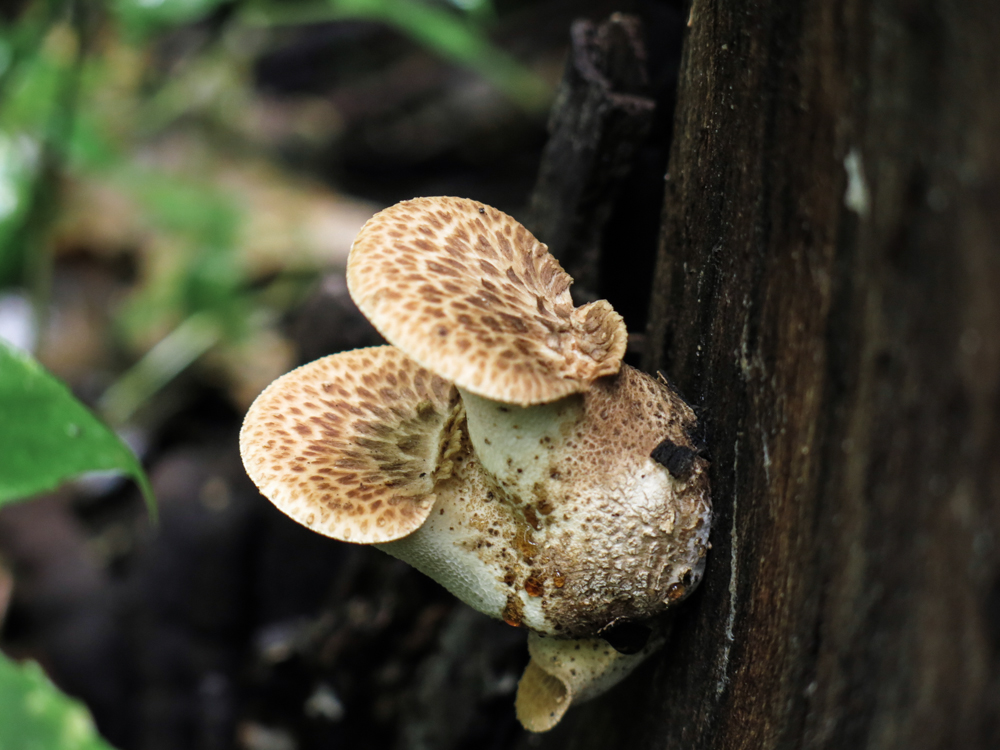 Foray RVA are my stories of walks, bike rides and adventures in the Richmond area while searching for edible plants and fungi. These experiences may include but are not limited to: recipes, tree identification, experiments with wild edibles, and generally the good, the bad and the ugly of my encounters in the urban forest.

I started exploring edible plants over 25 years ago, so I’m not new to it, but I’m also not an expert. Although I am relatively confident in my identification of trees, plants, and mushrooms, I am very aware I could make a mistake. So I’m not going to put a ton of time researching my articles since there are thousands of pages on “The Google” that can help give you more detailed information. Another note of caution: these are not your common foods bought at your local grocery store. Who knows, you just may be allergic to the same plants I have eaten and about which I am writing.

(Disclaimer: Sorry but I have to do this: Do not eat any wild plants, herbs, trees, mushrooms until you have verified with your health professional that they are safe for you; these articles are for inspiration and entertainment.  No liability exists against Truetimber Arborists, Peter Girardi, or Urban Forest Dweller or anyone who works or volunteers for us. Nor can they be held responsible for any allergy, illness, or injurious effect that any person or animal may suffer as a result of information in this article or through using any of the plants, trees, mushrooms, or other items mentioned.)

This Foray was inspired by viewing photos from a year ago where I made a homemade wine from Elaeagnus fruit. The fruit I collected was most likely Silverthorn (Elaeagnus pungens), a plant closely related to Russian olive and Autumn olive.

Unfortunately I let the wine sit too long and instead of drinking it when it was ready, it became too sour (some would say it “went bad’).  During the process of aging (rotting) I had some of the wine and it was OK, but not very great.  The Elaeagnus species are considered an invasive species so most people spend a lot of time and money removing this shrub before it takes over the native flora; well I went back to the same spot this year for more fruit to try my skills at wine again and all I found were freshly removed browning shrubs and stumps; I’m sad but I guess I’m also glad.

The actual motivation for the Foray today was to find Garlic Mustard (Alliaria petiolata) which I had seen during my bike rides over the past few weeks and which, if you didn’t know, is an invasive species. I had only nibbled on garlic mustard before and never harvested any large amounts of it or cooked it at home. I heard stories of friends harvesting this plant to make a pesto. So, this was my chance to try and report on my harvest. I felt like it was getting a little on the late side of harvest, so I knew I needed to act quickly. I’m pretty sure you can walk along most any road or trail near the river and find this plant. Right now the plant is upright about 18-24 inches tall with white flowers. It’s usually found growing in a group. I harvested about two large handfuls of the smaller leaves and younger stem of this plant (below) and tried to saute it in a pan with butter. 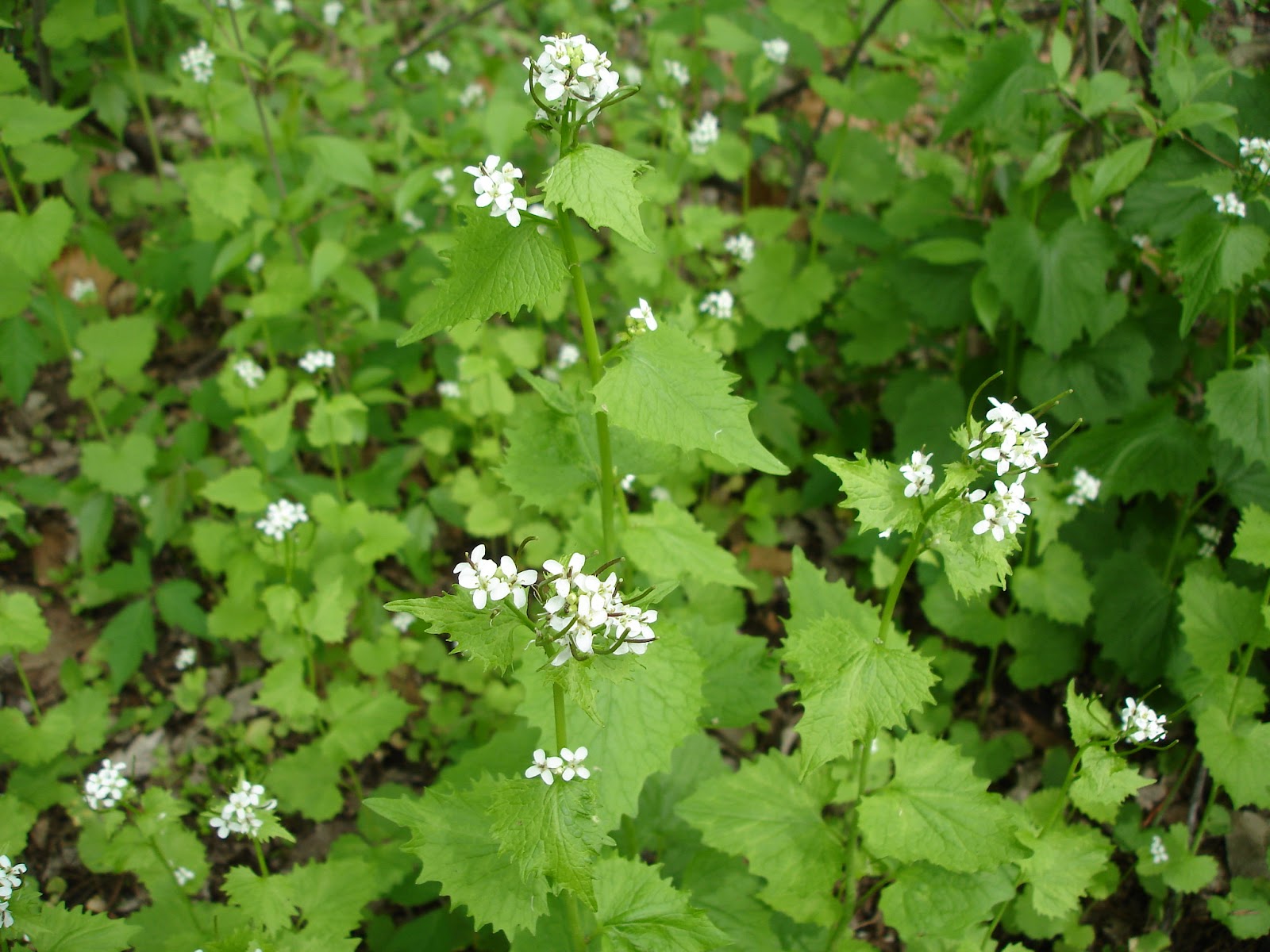 I’ll say the raw leaves had more flavor, and I definitely didn’t succeed at cooking this plant this time (probably too much salt). But it’s not too late to try to make pesto. 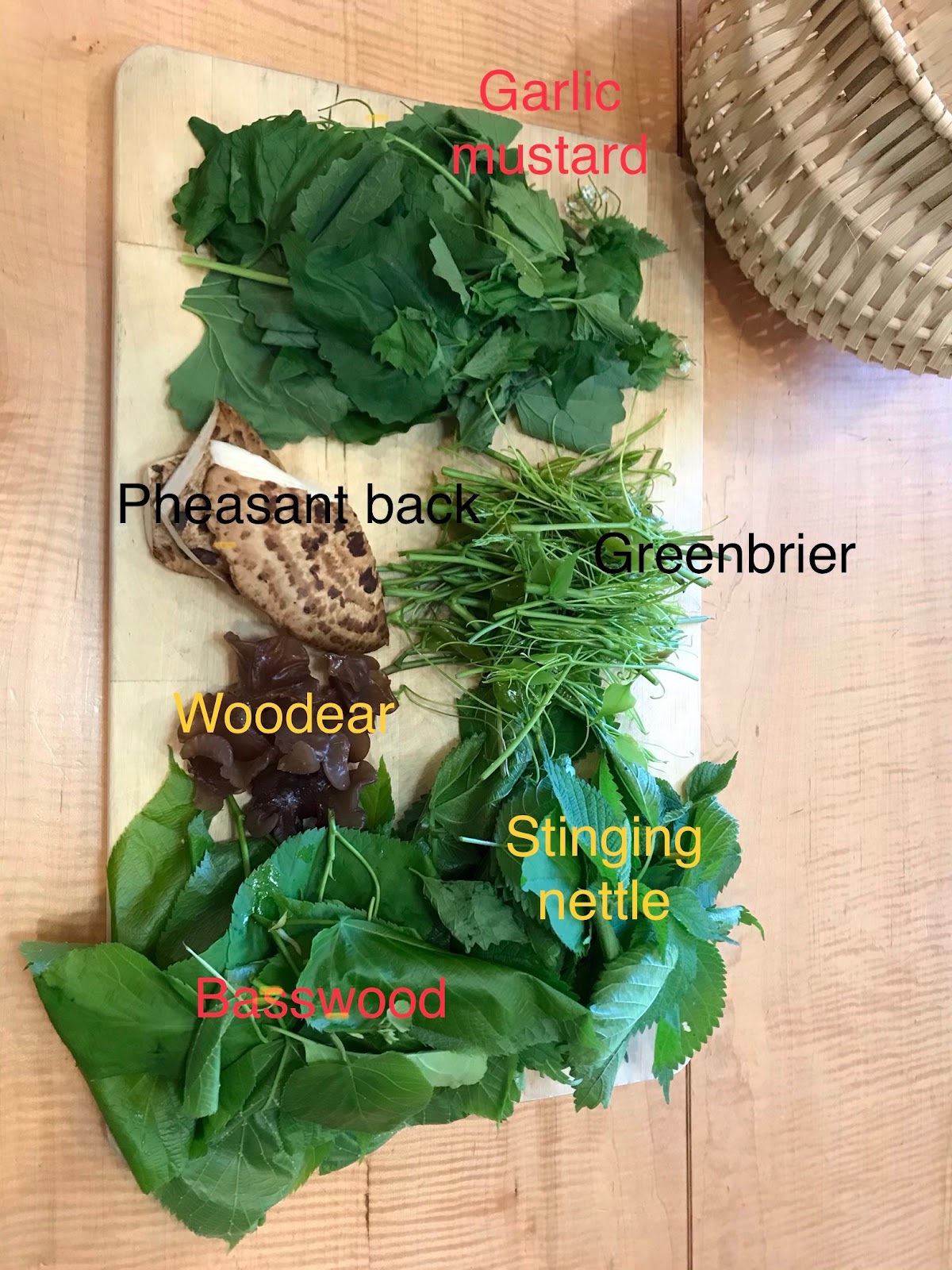 In the picture above you can see a few other plants and mushrooms I found during my Foray. For simplicity and for comparison I attempted to cook all the items separately in a large frying pan with grass-fed butter, some extra virgin olive oil, and sea salt.

The American basswood (Tilia americana) is the American version of the European Linden tree (Tilia sps.) which is a very common street tree, an ornamental tree here in Richmond and across the country. Be aware of possible pesticides that could be on this tree before tasting the leaves, buds or flowers. It is common to find heavy populations of aphids on this tree which is why it sometimes will be sprayed by commercial tree and lawn service companies. But also “bee” aware: New regulations restrict the timing of any pesticide on these trees when the tree is in flower or about to flower to reduce the risk of bees dying from the pesticides being in the flowers nectar and/or pollen.

So, I tried the raw small leaves of the basswood this weekend and kept chewing on the sweet nutritious young leaf and noticed a little bit of mucilaginous reaction similar to that of an okra but not as much. I also tried to fry the leaves in butter/olive oil and actually I think these leaves would do better raw in a salad. 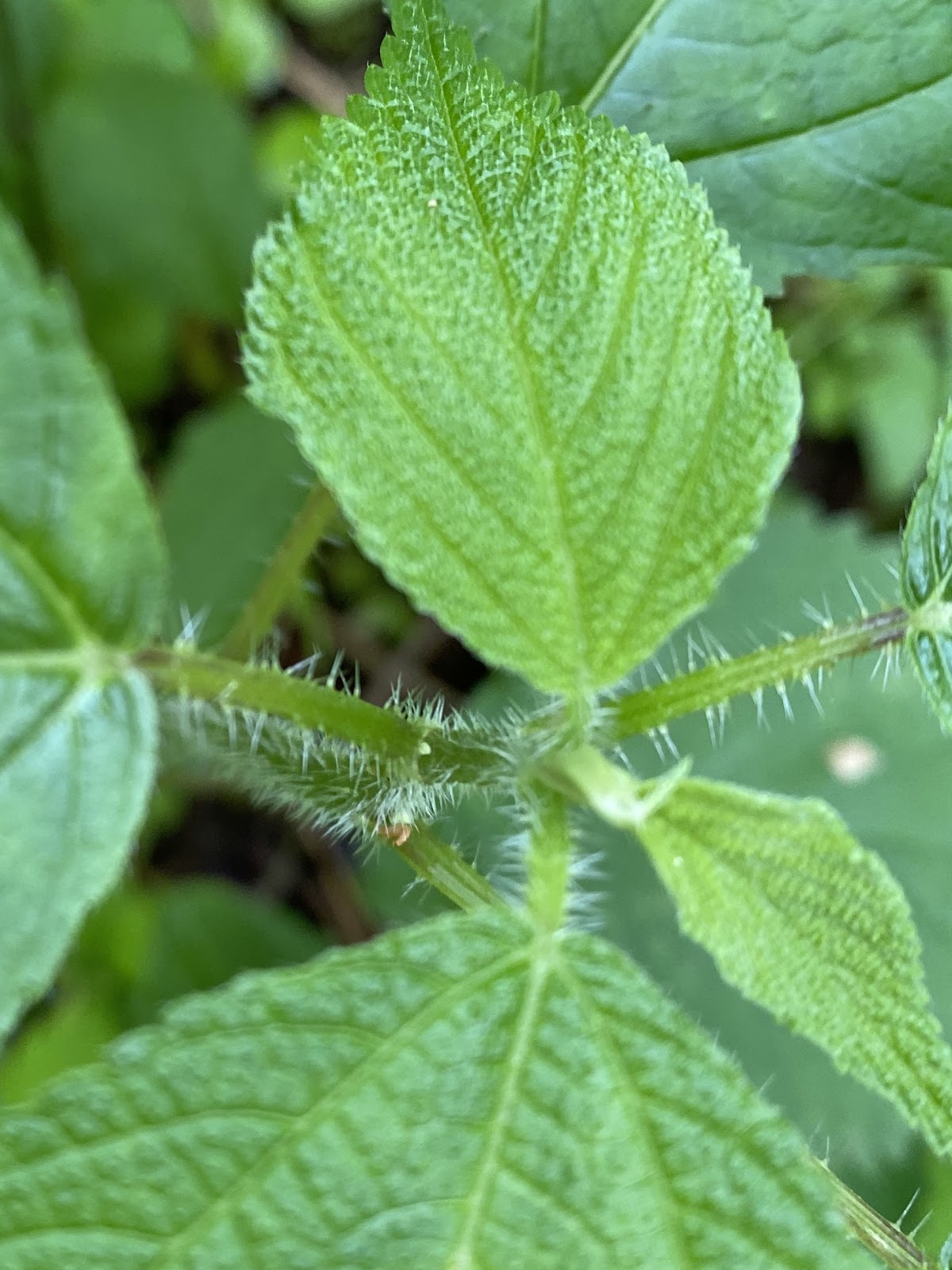 In this picture, you can see there were more flowers than ice. When I do it again I will use fewer flowers.

Use redbud flowers as decorations if you want to add a little design to your cake next spring. The cake above was made by my two daughters. It was beautiful and soooo good.

I’ve always wanted to try the pods (the young fruit) of the redbud. They look like snow peas, and I’ve read that the fruit is tasty when eaten young and tender.  Well, these were not very tasty. I think I will try again when they get a little larger to see if they get less bitter and have more flavor.

So, this was round one of my Foray RVA articles. Just thought I would share the mistakes I made this past weekend when harvesting and cooking these plants: