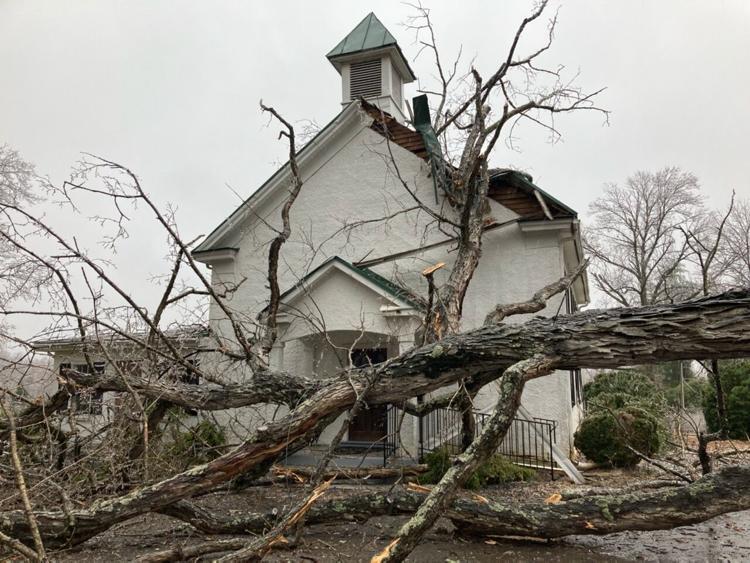 In 1716, there was still a Holy Roman Empire and George Washington wasn’t born yet. It was about then that a certain white oak sprouted to life in a place that’s now on the grounds of Huntly’s Willis Chapel United Methodist Church.

That white oak grew big: 7.5 feet in diameter and 22 feet in circumference. And it was certainly strong, surviving about every sort of nastiness in its grand life of about 306 years. But, after standing up to so much, last week’s ice storm was one storm too many.

Longtime Willis Chapel parishioner Judi Burke, a county real estate agent, reports that the oak fell as a result of the wintry blast that hit last Thursday, Dec. 15. The tree damaged the church, and Rev. Jeffrey Thompson is holding services next door at Reager School until repairs can be made. 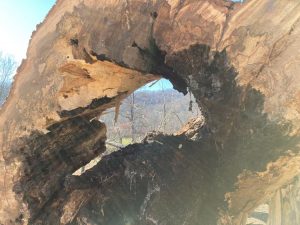 Jim Costello and his workers cleared everything from the driveway last Friday and Saturday. Wayne Woodward took the tree off of the chapel building and put a tarp over the roof to protect the inside of the church, according to Burke.

Thanks to insurance, the chapel will be repaired. And thanks to Burke’s husband Richard, the white oak will continue to serve its congregation. He plans to kiln-dry some of the lumber and make it into various pieces of furniture that can be used in both Willis Chapel and Reager School.

“Our tree will not be forgotten,” Burke says.

The fascinating history of a Huntly church and its big tree

On the occasion of the church’s 100th anniversary in July 2017, former Rappahannock News Editor John McCaslin looked at the story behind the chapel and its majestic tree. Part of his report:

Willis Chapel United Methodist Church in Huntly is celebrating 100 years of faith and fellowship this Sunday, although the historic chapel could justifiably be observing its bicentennial.

After all, it was 200 years ago, in 1817 — “away up in the Blue Ridge Mountains” in Riley Hollow — that a Methodist Episcopal church named “Shiloh” was built next to a small one-room schoolhouse where Sunday school was taught.

In 1914, Methodist preachers of the so-called Rappahannock circuit ordered the church be moved from its original site — “as there had been quite an exodus of people from that section” — to its present location “on the pike,” better known today as Zachary Taylor Highway.

It so happened that the church was rebuilt in 1917 — exactly 100 years after its 1817 deeded founding as Shiloh Methodist Episcopal Church South — and renamed Willis Chapel.

And who was Willis?

The chapel, according to church history, was placed “as a monument” in the location when on Oct. 14, 1864, a young preacher named Albert G. Willis volunteered to give up his life so that one of his fellow Confederate soldiers — one of Mosby’s Rangers — could live.

It so happened that a deserter from the Union army was in the vicinity of Huntly and came upon some of Mosby’s men, who were described as “intoxicated” from whisky. The rowdy rebels eventually killed the deserter and threw his body into a nearby grove, which was owned by Col. Thomas Settle of Flint Hill.

Learning of the deserter’s death, Col. Settle and his wife quickly retrieved the body, which they wrapped in a blanket and buried (the remains were later moved to the Flint Hill Baptist Church cemetery).

A short time later, a detachment of federal troops investigating the deserter’s death came upon a pair of Confederate soldiers near Huntly, one of them Rev. Albert Willis. In retaliation for the deserter’s demise, the Union soldiers declared that one of the Confederates would hang — to be decided by drawing straws.

The Mosby Ranger, a father of five, drew the fatal straw and immediately pleaded for his life. At which time the chaplain Willis stepped forward, explained that he had no dependents, and therefore he should be the one to hang instead.

History doesn’t reveal where the dastardly deed was done, but consider this: In February 1991 — a century-and-a-quarter after the preacher’s hanging — Lyttelton “Lyt” Wood, of the Washington-based tree-care company Tree Works, was asked by church elders to examine the health of a magnificent white oak tree that still stands today in front of Willis Chapel.

Following his thorough inspection, Wood submitted two pages of findings: “This is a very beautiful tree, with one of the largest crown spreads I have seen,” he wrote. “I would estimate the tree to be about 275 years old.”

Which means the tree has, by all accounts, been around for 300 years or more. Which also means that at the time of the hanging the giant white oak, with its tremendous limbs, was already 150 years old. Strong enough, no doubt, to hang a chaplain or anybody else by the neck.