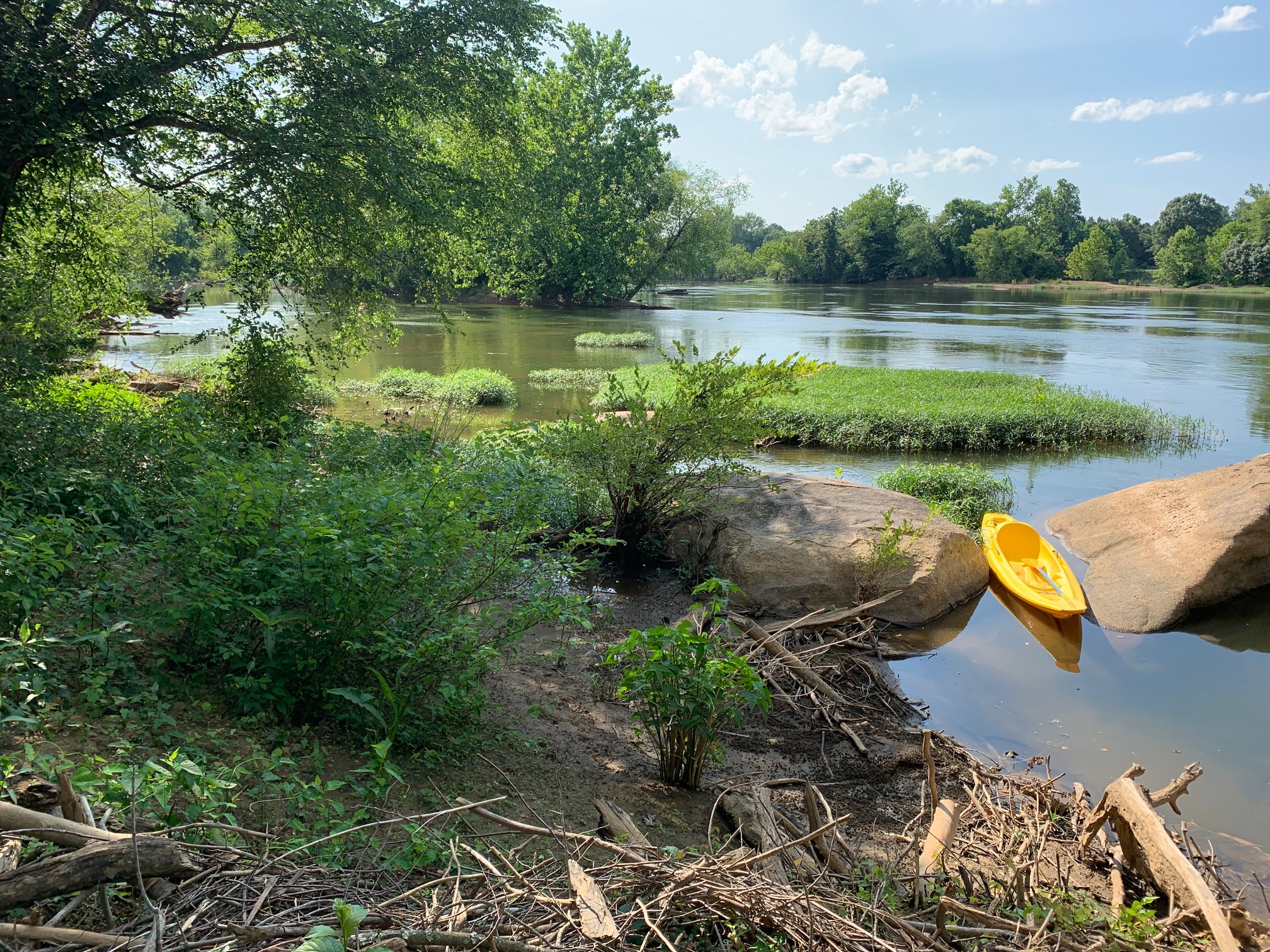 The James River spills out from the Blue Ridge Mountains like a drunkard from a hillside bar after last call. Wandering, turning back on itself, tipping and swaying towards any and all degrees of the compass dial, the dizzy James makes a serpentine tumble through 145 miles of the Virginia piedmont between Lynchburg and Richmond, connecting the same two geographic points a sober crow would connect with a 100-mile flight.

Though wildly meandering, heavy gravity imposes a general inclination to the drift, and just as the stumbling drunkard eventually finds himself at the base of the hill, the always-descending James finally empties itself into a place where the sun rises from a level sea.

When Old James has been drinking heavily up there in the hills he rushes cloudy and brown into Richmond, carrying along small pieces of mountain and earth picked up along the way. With a roaring laugh, he hurdles Bosher’s Dam, limbos the Willey Bridge, and a half-mile later bends through a narrow turn north before rushing headlong towards the Huguenot Bridge. After speeding up to spit through the bending restriction, the water slows down and eddies along the northern bank.

It is here, just west of the Huguenot Bridge, that the James drops some of its earthen luggage and writes a comma of soft sand into the flowing story of its journey from mountain to sea.  My daughter’s and I call the place “Long Island.”

But this island of sand would probably have been washed away or moved by changing river dynamics by now were it not for the pioneering efforts of a scrappy little river-loving family of trees known as The Willows.

In this part of the world, the willow is one of the first from the plant kingdom to inhabit a sandy island, and like those recently honored marines of the Normandy Invasion, a landing party of willows takes the open beach and does the desperate labor of holding it fast and making it inhabitable for those more celebrated species to follow.

Today Long Island is ruled by two mature sycamores towering above the high ground at the center and an Osage orange that litters the sand with tennis ball-sized green fruits in mid-summer. Surrounding these royals are river birch, sweetgum, and a host of other landed gentry, but it is where island confronts river at the western end that one finds the gnarled roots and mangled lower trunks of the tenacious willow trees that have fought hard to hold the beach and sometimes given all in the effort.

At first glance, it would appear that the dark and drunken James always has the upper hand. Willow wood is soft and light. Twigs and stems are easily ripped and carried away during confrontations with high water, leaving the underdog willows looking battered and beaten. But like the many-headed Hydra fought by the strongest Greek hero, Hercules, from each severed member of the willow there sprouts multiple new green-haired shoots. What’s more, in one of my favorite arboreal adaptations to the challenges of life, this river-loving modern hydra has learned not only to grow new heads from the stumps of the severed but also to grow new stumps from the severed heads themselves. After a free ride downstream, a willow branch can be enlisted to join a new landing party where it will shove roots sprouted from the branch into the soft bank and become a whole new riverbank reinforcement.

Only a few hundred yards to the east the recently remodeled Huguenot Bridge crosses the river, shouldering the incessant motion and drone of car-mounted humans. Yet on the sandy north bank of Long Island one finds himself quite secluded.

The small stream of water between island and mainland is guarded at either end by old black willow trees extending horizontal arms over the passage and dangling light green locks right down to the surface. Once just a small island of sand, thanks to these unsung heroes, Long Island is now a natural paradise of trees and wildlife. On a summer day, if the water level is right, you can set your lawn chair in the ankle-deep northern passage of water, watch and feel the sand crawling past your feet, listen to the faintly whispered response of fluffy willow to river breeze, and write a peaceful comma into your own fast-flowing life story.