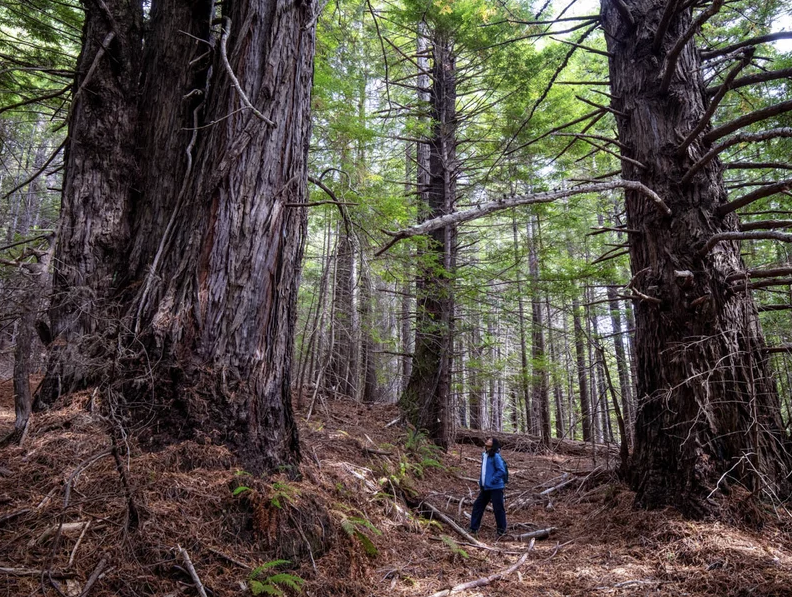 Save the Redwoods League has donated more than 500 acres of redwood forestland to the InterTribal Sinkyone Wilderness Council, a coalition of Native tribes that have been connected to the land for thousands of years.

A conservation group is returning guardianship of hundreds of acres of redwood forestland to a coalition of Native tribes that were displaced from the land generations ago by European American settlers.

Save the Redwoods League purchased the 523-acre area (known as Andersonia West) on the Lost Coast of California’s Mendocino County in July 2020. It announced on Tuesday that it had donated and transferred ownership of the property to the InterTribal Sinkyone Wilderness Council, a consortium of 10 Northern California tribal nations focused on environmental and cultural preservation.

The forest will be renamed “Tc’ih-Léh-Dûñ” — which means “fish run place” in the Sinkyone language — as “an act of cultural empowerment and a celebration of Indigenous resilience,” the league said in a release. The tribal council has granted it a conservation easement, meaning use of the land will be limited for its own protection.

“Renaming the property Tc’ih-Léh-Dûñ lets people know that it’s a sacred place; it’s a place for our Native people. It lets them know that there was a language and that there was a people who lived there long before now,” said Crista Ray, a tribal citizen of the Scotts Valley Band of Pomo Indians and a board member of the Sinkyone Council. She is of Eastern Pomo, Sinkyone, Cahto, Wailaki and other ancestries.

How the transaction played out

The league’s 2020 purchase of the forest cost $3.55 million and was fully funded by Pacific Gas & Electric Company (the utility, which has been behind multiple deadly wildfires, supports habitat conservation programs to mitigate other environmental damage it has caused).

PG&E reimbursed the league and council for “transactional cost and management plan preparation,” the statement adds, and contributed a $1.13 million endowment to support ongoing stewardship of the area.

National Parks Should Be Controlled By Indigenous Tribes, One Writer Argues

Establishing Tc’ih-Léh-Dûñ supports meeting the power company’s 30-year conservation goals, which the league says were developed alongside the U.S. Fish and Wildlife Service. The agency also approved the long-term management and stewardship plan for the property.

What their conservation efforts will entail

Tc’ih-Léh-Dûñ is home to ancient trees, important bodies of water and a variety of endangered species.

It consists of 200 acres of old-growth coast redwoods and 1.5 miles of Anderson Creek, a stream and tributary of the South Fork Eel River.

The council and the league say their partnership will protect the environment by preventing habitat loss, commercial timber operations, construction and other development.

They plan to rely on a mix of Indigenous place-based land guardianship principles, conservation science, climate adaptation and fire resiliency concepts to heal and preserve the area.

“We believe the best way to permanently protect and heal this land is through tribal stewardship,” said Sam Hodder, resident and CEO of Save the Redwoods League. “In this process, we have an opportunity to restore balance in the ecosystem and in the communities connected to it, while also accelerating the pace and scale of conserving California’s iconic redwood forests.”

People involved with the partnership stress that it’s not just the protection of the land that matters — it’s also the restoration of the property to descendants of its original inhabitants.

Notably, the Sinkyone Council has designated Tc’ih-Léh-Dûñ as a tribal protected area.

It joins another 180,000 acres of conserved lands along the Sinkyone coast, the release notes. The council hopes that the acquisition will continue expanding the network of adjacent protected lands with similar ecosystems and cultural histories.

That will enable the tribes to “achieve larger landscape-level and regional-level protections informed by cultural values and understandings of these places,” according to Hawk Rosales, a former executive director of the council who is of Ndéh (Apache) ancestry.

The land donation can be contextualized as part of the broader “land back” movement, an intersectional effort to return Indigenous lands — and autonomy — to Indigenous communities, especially public lands like national parks. Research shows that forced relocation and the loss of historical lands has made Native Americans more vulnerable to climate change.

And this isn’t the first time the league has donated land to the Sinkyone Council — it donated a nearby 164-acre plot of redwoods back in 2012, marking the first time Save the Redwoods entered into a conservation agreement with a tribal entity.

Indigenous people worldwide play a key role in environmental stewardship. According to a 2021 United Nations policy brief, they represent some 5% of the world’s population, but effectively manage roughly 20% 25% of the Earth’s land. Much of their land is in areas that hold 80% of the planet’s biodiversity and about 40% of protected lands.

This story originally appeared in the Morning Edition live blog.