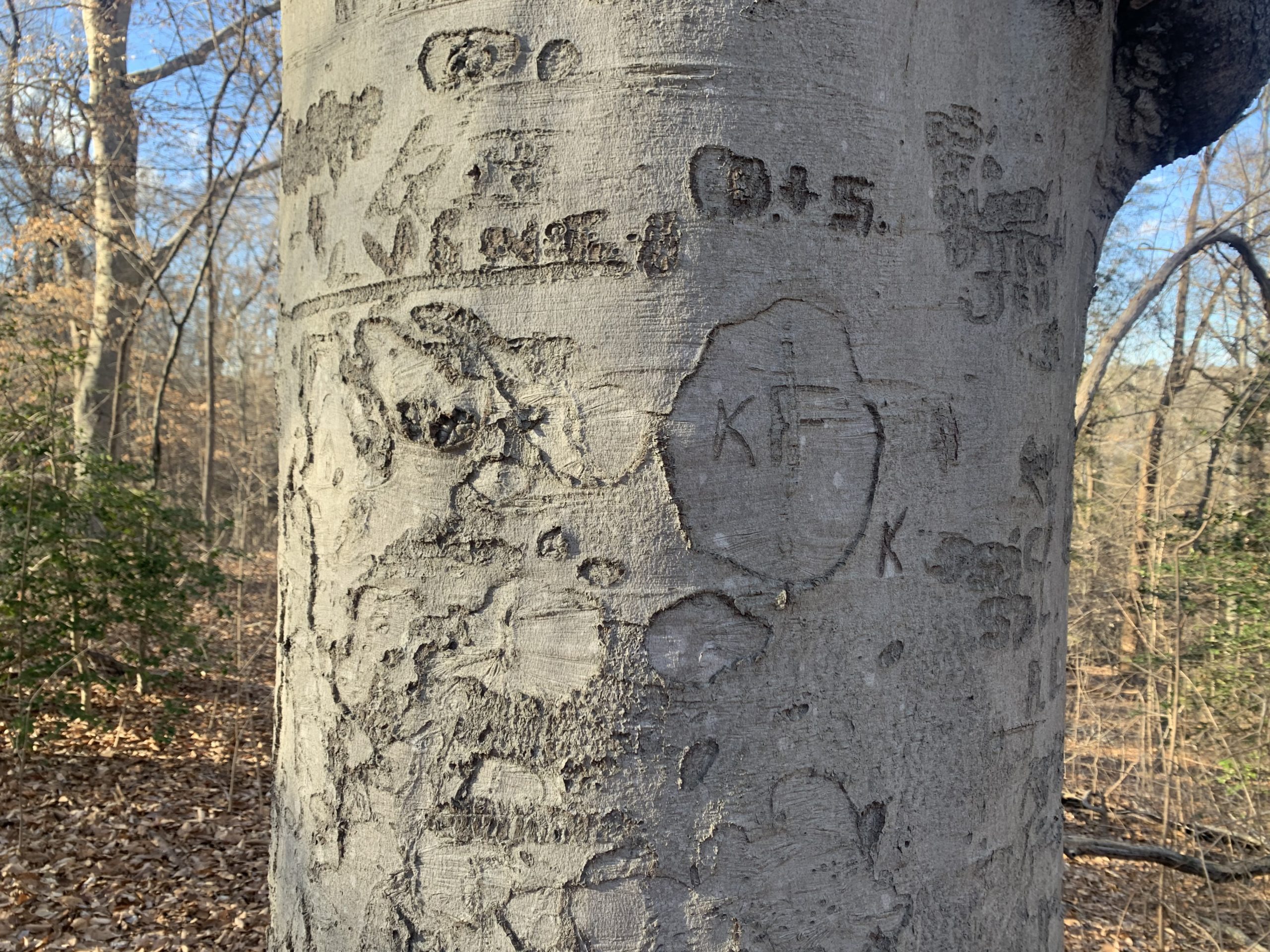 O Roalind! These trees shall be my books,

And in their bark my thoughts I’ll character;

That every eye which in this forest looks

Shall see thy virtue witness’d everywhere.

The Best Tree ID Book Ever

But this month as my little self-imposed writing deadline came and passed I found my lap strangely empty.  Eventually a book happened to be there, and in this book I read some amazing things about the American Beech tree.  In my favorite tree identification book, author Donald Peattie does more than catalogue the features of a tree that identify its species.  Peattie recounts the significance a tree species has had in the life and thoughts of Americans since we first arrived on this continent. He paints a verbal portrait of “American Beech” using the same vocabulary one would use to characterize members of the human species.

And much as it is with the more animated species, Peattie finds trees most beautiful in the way they color, support, and orient themselves to embrace the great light of their experience.  More beautiful in poise than in part, so to speak.  In his “A history of North American Trees” Peattie rescues “American Beech,” or “Fagus grandifolia,”  from the scientific dissection table and returns it to the place it was first encountered – in our thoughts and feelings.  Only  then does he relate the species to our need to survive, our need to create, and  finally the great need that follows those others – our need to build.  His is an unparalleled account of the full interaction between the highest-ranking delegates from the respective kingdoms “Plant” and “Animal.”

But while admiring his portrait of the American beech tree I stumbled upon a highlight that seemed conspicuously embellished.  Peattie relates that according to common lore, in the year 1916 an old American Beech in Washington County, Tenessee fell, and in the flesh of this tree one could still read the remnants of a “hunter’s triumphant” inscription:

How could it be possible that an inscription made on the outer surface of a tree that grows ever larger by adding layers on itself is still visible 156 years after it was first scratched. We’ve all seen professions of love scratched on beech trees, or confirmations that a person “was here” at a certain date, but how long do these inscriptions remain readable?  The answer to this question would require some hanging out, so I planned a little Richmond hike the next day for me and my daughter.

The great Hall of Beech

Brooke brought along one of her best friends, and the three of us dropped onto the Buttermilk trail from the 42nd street parking pullout. We headed west into the steep accordion folds of the southern bank east of the Boulevard Bridge.  I was only taking a stab in the dark with this location, but it wasn’t long before our little thrust into the woods found its target.  I’ll let Peattie describe what we saw:

“Far down the aisles of the forest the Beech is identifiable by the gleam of its wondrously smooth bark, not furrowed even by extreme old age.  Here it will be free of branches for full half its height, the sturdy boughs then gracefully down-sweeping.  The gray bole has a further beauty in the way it flutes out at the base into strong feet, to the shallow, wide-spreading roots.  And the luxuriant growth of mosses on the north side of such a tree, together with the mottling of lichens, add to the look it wears of wisdom and serenity.”

Yep.  That’s the tree we saw stretching its long arms above a thick stand of yellowing Paw Paw.  And that’s pretty much the impression it made.  And this beech tree we found just north of the trail was not alone.  Above and south of the trail we discovered a high ridge populated by a mature stand of Beech. Each of these serene old cliff dwellers was densely tattooed with human scratchings to the height of the average reach of a human hand.

As expected, the girls and I found an abundance of human addition formulas.  You know, one set of initials added to another, with the sum total represented as a heart shaped outline pierced by an arrow. I was at first surprised when the density and quality of inscriptions increased with increasing distance from the well trodden Buttermilk.  Then I decided this was natural.  Intimacy blossoms in secluded places, and young bucks like to claim fresh, new territory of their own.

We found some old dates.  Maybe a 1928.  Definitely a 1930, and a 1964.  But most of what we found seemed to discredit the idea that a Daniel Boone inscription lasted 150 years.  The older inscriptions, as I expected, expanded and distorted until many of them became amorphous hieroglyphs. Over time words had become unreadable shapes.  Still, it surprised me that any evidence at all of these old inscriptions remained.

More Stabs in the Dark

Maybe the longevity of the wounds is due to the fact that the Beech tree wears its heart just beneath a very thin film of skin or bark.  By “heart” I mean that place just under a tree’s protective outer layer that is responsible for cell division and differentiation. The cambium layer just under the bark is where decisions are made about when to slow down or grow faster, where to build extra strength, where to build barriers against decay, and when to give up on a damaged section of branch or stem.  In short, this “cambium” layer is the place where decisions about how to live and grow are made. The fresh cells created by the cambium are responsible for nutrient and water circulation.  It’s as good a place as any to call the “heart” of a tree.

Humans protect their heart by tucking it inside lungs and a cage of ribs.  Most trees protect their cambium heart with a corky outer layer.  In some species these outer layers are so thick they can protect the cambium even when the forest is ablaze with fire.  In most trees the bark is at least thick enough to protect the tree from extreme heat or cold, or from mild impact or abuse by people and animals.

They wear their Hearts on their sleeve

Since it wears its heart just under a thin grey sleeve, I suspect that the longevity of a human etching on the bole of a beech tree is partly dependent on the extent to which the carver’s edge dug into the tree’s heart.  Light scratches distort and disappear more quickly, perhaps, while deeper carvings become long-term tattoos.  Maybe a beech tree, when it is cut deeply enough, carries the memory of its heart damage with it even as it grows and expands many years beyond the initial wound.

In the case of the famous Daniel Boone tree, it could merely be that once this tree was known and revered, the original inscription was periodically enhanced by any who did not want this wonderful living tablet of american lore to lose its message.  After a first hand study of the old Beech trees along Buttermilk Trail, my best guess is that as the name “Daniel Boone” began to be inked onto the pages of history books, humans encountering this tree had an irresistible double urge.  First, if the original script was becoming unreadable, they felt compelled to re-engrave it.  Second, these passersby followed an even stronger urge to replicate the hand motions of an American legend.  With pocket knife in hand, I suspect subsequent generations invoked the spirit of the original hand.  In their thoughts: Daniel Boone stood in this very spot. His hand made this exact motion. Using a knife like this one,  this killer of “bars” carved these exact words.    Plausible.  Maybe this famous wound on the heart of an old beech tree was over the years re-opened by visiting romantics.

Using our fingers rather than a scratching edge, the girls and I likewise traced wounds and invoked the spirits of the many lovers and youthful wanderers who had stopped long enough in this old stand of Beech trees above the Buttermilk to character their thoughts, feelings, and accomplishments.  In the end, I found no clear correspondence between the age of an inscription and its legibility.

Leaving this mystery pleasantly unsolved, we dropped down to the boulder field beside Mitchell’s Gut rapids where a fall day faded over the river.  The quiet beauty and tumbling melody at river level was astounding.  The late day playfulness of my daughter and her best friend was mesmerizing.  It all satisfied.