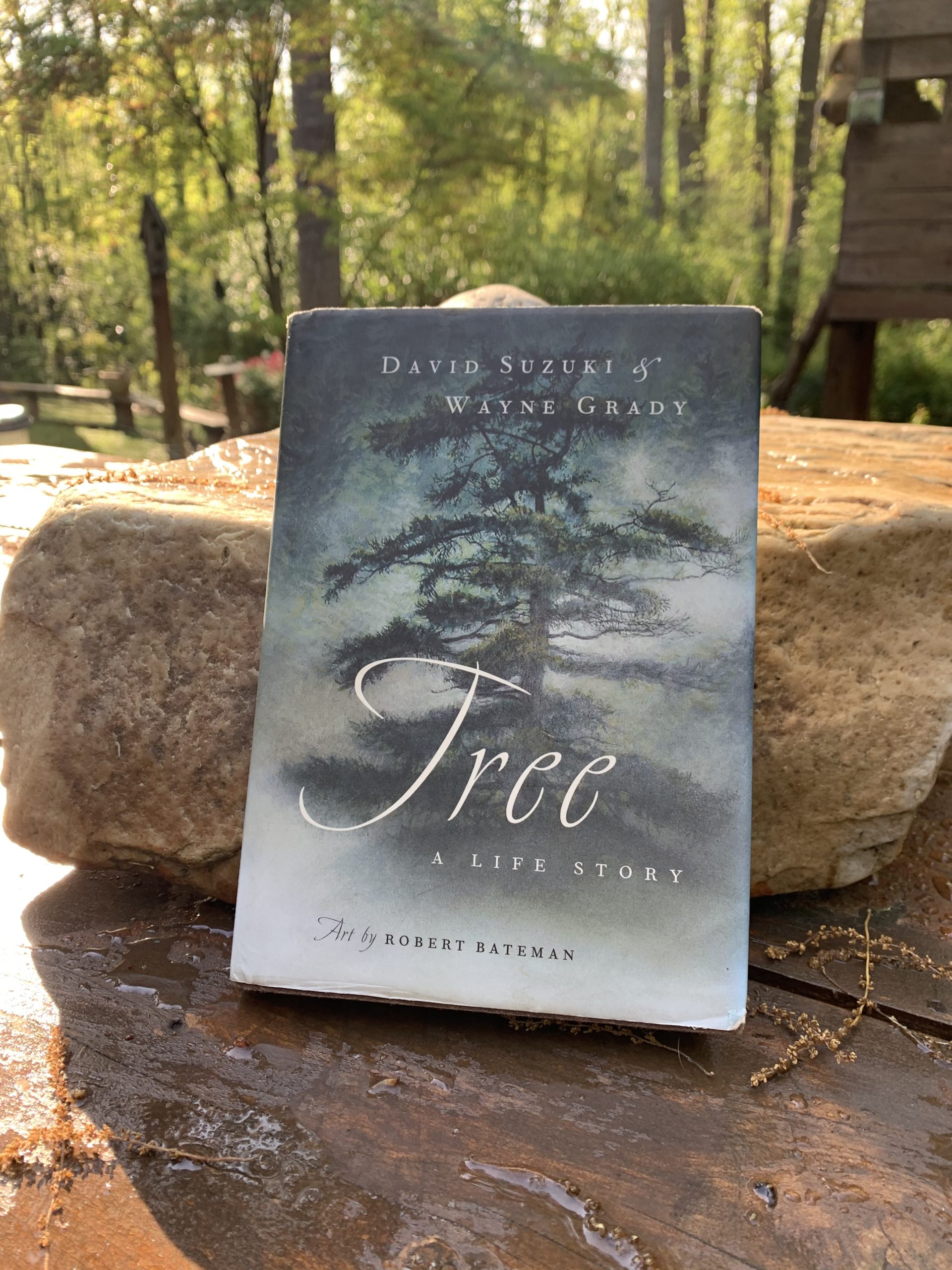 Have you really looked into a forest recently? You know, the kind of looking where the casual eye scan is followed by a true effort to relate. Looking, like many of us don’t do enough of these days. I’ll tell you what, let’s rephrase the question.

“Have you related yourself to a forest recently?”

If the answer is “no,” or “not enough,” or even “I don’t know how,” then you may want to pick up a copy of “Tree: A Life Story” by David Suzuki and Wayne Grady, with illustrations by Robert Bateman.

The authors grabbed my attention early with an evolutionary explanation of my very first relative on this planet — the protocell of a bacterium that was the first combination of atoms to react to its environment.  As that story goes, some 3 billion years or so since cellular sex became the rage, and after millions of randomly mutated offsprings, you get the stiff, 90-foot tall loblolly pine tree standing in my backyard. You also get, inside the house, the soft-skinned and more animated creature wiggling his fingers on a keyboard. More alike, if you look back far enough, than different.

This blowing the dust off our oldest family album has the desired effect.  When the authors begin telling the story of the 500-year lifetime of a single douglas fir tree in the pacific northwest, I am no longer reading a book about a tree. I am reading the biography of a relative.

And what a biography it is! Though the authors have a proper respect for evolution theory, they recognize that when it comes to living organisms, the total character is somehow more than the sum of the parts. In “Tree: A Life Story” we learn the details of the myriad relationships this one douglas fir makes with its environment. We learn of its immense thirst and the fancy mechanisms it has devised to grab water from the earth. We learn how it ages, and begins to share more and more of itself. We learn how in old age it becomes an apartment complex for the forest homeless, and even after death and collapse it serves as a nursery for the development of the next generation.

Suzuki and Grady’s douglas fir is not merely the generic output of some universal evolution machine. It is something more.  Something not altogether predictable.  This 300-foot-tall earth-giant is a bravely-struggling living organism with a strangely-inspired living character.

Along the way, the authors diverge into detailed discussions of the history and progression of botany, but they also ramble into wonderful discussions of the plants and animals that share a  place in the tree’s life story. Owls, mice, bears, cougars, woodpeckers, subterranean organisms. These and many more have learned to respect the areas around the douglas fir tree. They respect that life, and prey, are abundant there. The authors awaken my understanding that even while sacrifices of life are made in the forest, rarely are they made to the point of gluttony or species depletion, and always there seems to be a balanced harmony of characters.

I found it almost a shame that towards the end of this tree biography the authors reviewed the alarming statistics about the decreasing area of earth’s forests and made some political jabs.  Not that the blows weren’t appropriate or warranted, but these combative gestures yanked me out of the unspoiled, virgin forest and back into the reality of fear and concern for the future of these places, and these trees. Just a few quick jabs at the end. I guess I can take it, and I guess I can trust the authors of such a wonderful book. If those jabs at a society that seems unable to relate itself to a forest are important to them, they should be important to me. And so I ask again,

“Have you related yourself to a forest recently?”  If not, get this book.