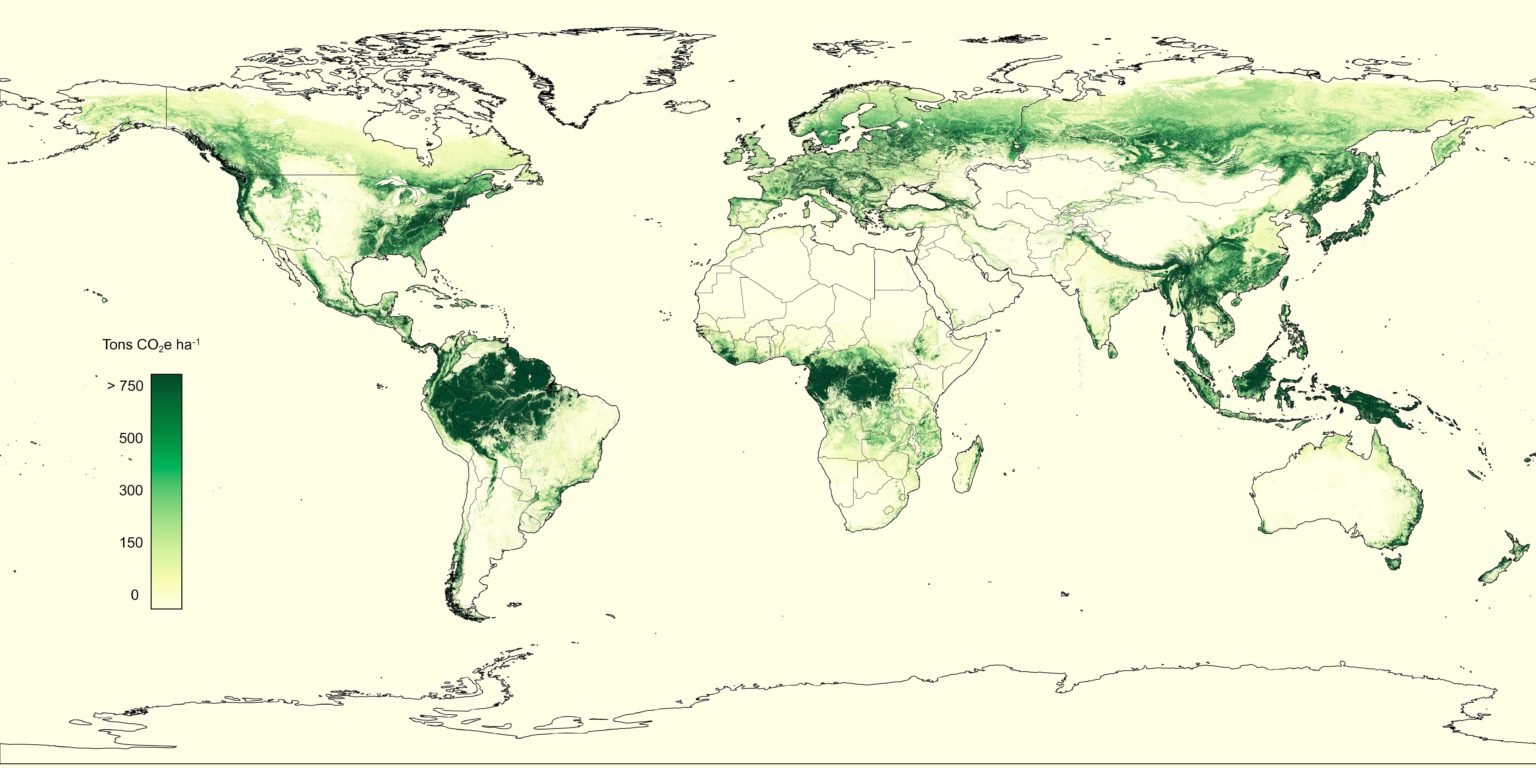 Users of a new digital platform from nonprofit CTrees will be able to track in near-real-time the carbon stored and emitted in the world’s forests. The platform is borne out of two decades of research and development by a team of the world’s leading climate scientists and data engineers. It’s being touted as the first-ever global system for calculating the amount of carbon in every tree on the planet.

“Forests are extremely important to mitigate climate change because they absorb a major part of the carbon in the atmosphere annually,” Sassan Saatchi, a senior scientist at NASA’s Jet Propulsion Laboratory who collaborated with colleagues in the U.S., Brazil, Denmark and France to develop the platform, told Mongabay.

However, because trees are so efficient at stashing away carbon dioxide, they release vast quantities of carbon back into the atmosphere when forests are degraded, felled or burned. Recent studies have shown that many forests are nearing a tipping point that compromises their ability to store carbon, with parts of Southeast Asia and the Amazon already net carbon emitters due to multiple human-induced stressors. 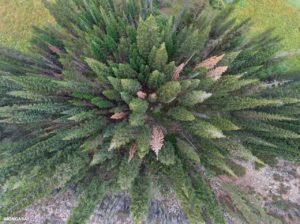 Pine trees in the Sierra Nevada, U.S. Photo by Rhett A. Butler for Mongabay

Due to this weighty influence on atmospheric carbon, forest conservation and restoration have become major components of climate change mitigation efforts through climate policy initiatives that rely on forests to offset carbon emissions. But up until now, the world has lacked a globally consistent and transparent means of quantifying and tracking forest carbon.

The new CTrees platform now fills this gap, said Saatchi. It’s a “game changer,” he said, for the world’s governments, investors and organizations to make better science-based decisions. “The transition to carbon neutrality requires accurate accounting,” he said. “To truly evaluate the benefits of carbon reduction efforts, market and policy actors need a global state-of-the-art system for measuring and monitoring. Until now, this technology hasn’t been available to carbon markets, and only on a limited basis to climate policymakers.”

The new platform is due to officially launch at COP27 this November, when world leaders will convene in Egypt to discuss progress made toward national climate commitments. Knowing exactly how much carbon forests emit or capture will be key for decision-makers involved in calculating individual countries’ nationally determined contributions under the Paris Agreement.

Saatchi said CTrees’ science-based approach offers a much-needed update to the current method of forest carbon accounting, which relies on nationally reported figures that are often incomplete and inconsistent. By providing a high-accuracy, up-to-date overview of the carbon implications of forest conservation and restoration at local, national and global levels, the new platform can bring unprecedented levels of transparency and accountability to the arena, he said.

Besides policymakers and investors, the platform is a boon for environmental advocates and rights groups that can access open-source global and national-level data, enabling them to hold governments and organizations to account on their commitments. 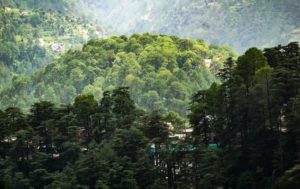 Global forests are still an overall net carbon sink, but some forested areas have transitioned to net emitters due to degradation, deforestation, rising temperatures and many other threats. Image courtesy of CTrees

There are an estimated 3 trillion trees from 60,000 species on the planet. Therefore, tracking the forest carbon flux across the globe a huge task, but one that Saatchi said new technology can deal with. “In the old days, we had to take [airborne] pictures and then draw lines around these single trees to identify them and separate them. … Now, we do it with cloud-based artificial intelligence and we can process terabytes of the data in hours.”

The CTrees forest carbon monitoring system merges carbon flux datasets spanning back to the early 2000s with artificial intelligence-enabled high-resolution satellite data from a range of systems, including Planet, which provide datasets of up to 3 by 3 meters (10 by 10 feet) resolution and other sources that go down to 0.5 by 0.5 meters (1.6 by 1.6 feet) resolution.

“This gets us to the level of trees,” Saatchi said, allowing individual trees outside of forest stands, such as in urban centers, to be included in carbon accounting — a practice typically lacking up until now. The fine-scale approach to carbon accounting makes it possible to estimate emissions and sequestration not only at the country level, but also at much finer scales such as individual jurisdictions, forest patches, plantations and tree-planting projects.

The platform can also distinguish between natural forests and commercial plantations, the cutting cycle of which can be tracked. Such information is vital to assess which types of forest investments could make the most impact, he said. 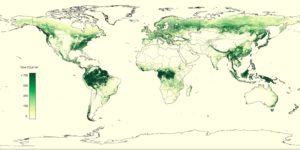 CTrees map of carbon stored in forests globally during 2021. Image courtesy of CTrees

A boost to tree planting accountability

Karen Holl, a restoration ecologist at the University of California, Santa Cruz, said tools that enable real-time and rigorous monitoring of tree cover are critical to verifying whether the world’s massive tree growing efforts are having the desired effects. This is because many organizations involved in tree planting overly focus on the number of trees put into the ground, she said, rather than investing in long-term monitoring to ensure planted trees remain healthy and alive well into the future.

“There are many examples of tree growing efforts that have failed initially, and sometimes the same areas are planted year after year with the trees being counted multiple times,” Holl told Mongabay in an email. “Monitoring on most of these reforestation projects is short-term (1-3 years) or nonexistent. Moreover … young secondary forests are often recleared within a decade or two.”

Meredith Martin, an assistant professor of forestry at North Carolina State University, said the lack of monitoring is a major concern. She and her colleagues recently found that fewer than one-fifth of organizations engaged in tree planting in the tropics have a monitoring program, with still fewer measuring tree survival or amounts of carbon stored.

Martin acknowledged that platforms like CTrees are powerful tools to promote transparency and accountability in the sector, but noted that reducing the merits of reforestation efforts down to the amount of carbon sequestered alone risks overlooking other important factors.

“Carbon doesn’t tell us anything about biodiversity or even about actual forest resilience to climate change,” Martin told Mongabay in an email. “For example, we are seeing new invasive pests and diseases spreading throughout the US that can wipe out individual tree species quite quickly, so managing forests for diversity and functional redundancy may be more important in the long term than just focusing on the amount of carbon sequestered in the short term.”

Mark Ashton, a professor of silviculture and forest ecology at Yale University, said that the problems of forest loss and degradation are unlikely to be solved solely through technological solutions. “The real solutions to forest recovery and sustainable use are social, cultural and economic,” Ashton told Mongabay in an email. “Better forest management is obtained when you direct your focus to solving human problems in the forestlands that are undergoing deforestation and degradation.”

Martin echoed Ashton’s call for more human-centric solutions. “Ultimately I think much more attention should be spent listening to local communities and stakeholders to support forest stewardship in a truly sustainable way,” she said.