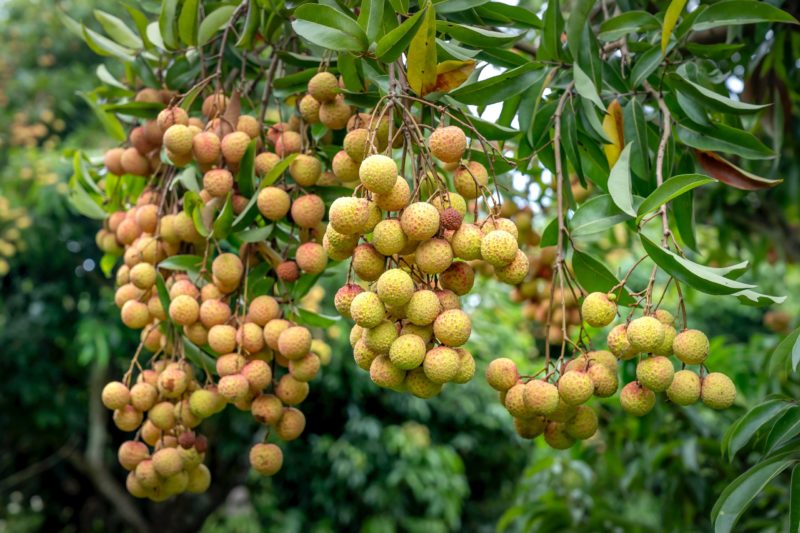 Whole-genome sequences reveal multiple domestications of this agriculturally important tree and may hold the secrets to producing the sweet fruit year-round.

If you happen to be in the Fujian province of China and know the right people, you could have the opportunity to see the oldest living lychee tree—a Songxiang variety that most likely first sprouted more than 1,250 years ago during the Tang dynasty. That was around the time Emperor Xuanzong created a relay of sprinting horses to race the quick-spoiling fruit 700 kilometers from where it was grown to the capital in a week to ensure his beloved consort Yang Guifei had her fill of fresh lychee throughout its short fruiting season.

If it also happens to be June or July and you’re really lucky, you might even taste the ancient tree’s fruit, because even after a millennium, the plant continues to bear the sweet lychee that made its species a major agricultural crop in the region.

While the first records of lychee cultivation date back around 3,000 years, the source of domesticated varieties has remained unclear. That may be because the tree’s agricultural history is complex: comparative analyses of wild and cultivar genomes suggest there wasn’t a single moment in history when lychee trees were tamed. Instead, whole-genome sequencing analyses published January 3 in Nature Genetics indicate that people domesticated the plant twice to obtain trees that bloom at different times.

A team composed of scientists from the US and Chinese universities set out to generate a high-quality genome sequence for Feizixiao, a popular lychee hybrid bred by crossing an early-flowering variety with a late-blooming one. Using PacBio long reads corrected with Illumina short reads, the team assembled the cultivar’s 470-megabase genome, which they estimate is 96.2 percent complete. They then annotated it using RNAseq data and used it as a reference for whole-genome resequencing of 72 previously sequenced individuals, including 38 wild ones, representing various types of lychee.

Phylogenetic analyses of these genomes suggested that the species originated in the southwestern province of Yunnan and then spread eastward and southward, including all the way to Hainan Island off China’s southeastern coast by an estimated 18,000 years ago. Millennia later, people began to cultivate trees from both places: ones from Yunnan that flowered early in the summer, and ones from Hainan that flowered later. These were then interbred to create Feizixiao and other intermediately flowering cultivars.

In addition to publishing the high-quality reference genome, the researchers dug into the differences between early- and late-flowering varieties in the hopes of discovering the genetic basis for bloom timing. Among their findings is a 3.7-kilobase deletion correlated with early flowering. The earliest-flowering varieties lack the region on both of their chromosomes, while late-flowering ones have two copies of the sequence. The hybrid Feizixiao is heterozygous for it.

“This is very useful for breeders. Because the lychee is perishable, flowering times have been important to extending the season for which the lychee is available in markets,” says Victor Albert, a University at Buffalo evolutionary biologist and a senior author of the study, in a press release. South China Agricultural University professor Rui Xia, also a senior author on the paper, adds that the deletion can serve as a biomarker for flowering time.

The authors also note that new genome sequence could facilitate a deeper understanding of other agriculturally useful traits and aid breeding programs in developing novel varieties—including, perhaps, trees that flower at dramatically different times, Albert tells Popular Science. And if so, then fresh lychee might become available year-round—something that could have only been a dream to Yang Guifei (and a nightmare to Emperor Xuanzong’s horses).

Despite the name, the California wild radish isn’t native to the US state—instead, it’s a hybrid of two species that were separately introduced to the region more than a century ago. First detected in the 1920s, this botanical mash-up has taken over, out-competing both parental species to become a widespread invasive weed. Its ecological success is likely due to its “unique combination of parental traits” write the authors of a December 16 Journal of Heredity study detailing the first whole-genome assembly for the hybrid. The sequence will shed light on the genetics of those traits, as well as generally “facilitate basic and applied research on this fascinating and problematic species,” they write in the paper’s conclusion.

Reducing humanity’s reliance on oil requires finding substitutes for petroleum-based plastics. Among potential alternatives are biologically produced polyhydroxyalkanoates (PHAs), which accumulate naturally in bacteria such as Tepidimonas taiwanensis, a rod-shaped, motile species isolated from a hot spring in Taiwan. T. taiwanensis has also attracted interest from biotech companies because it exhibits potent alkaline protease activity, which is useful in sundry industries. The first whole-genome sequence for the species, published December 15 in Genome Biology and Evolution, should provide insight into the molecular basis of both of these useful features, the authors write.