Home | Tree News | COLUMN/PERSPECTIVE: A vision for a tiny tree on the beach

COLUMN/PERSPECTIVE: A vision for a tiny tree on the beach 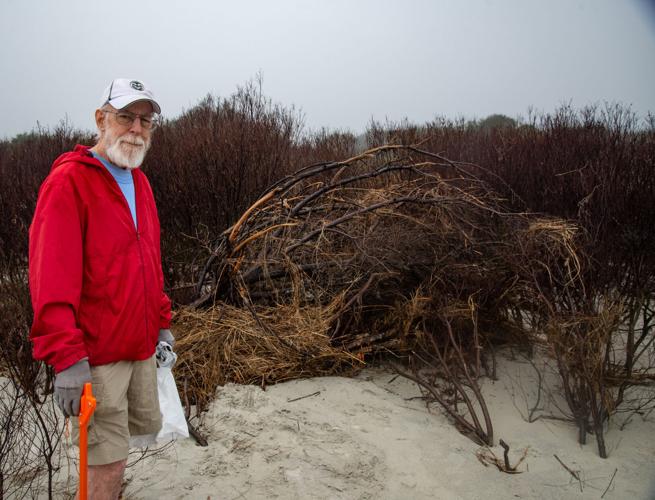 There are some revered trees in Glynn County. There’s the Lanier Oak where, it is said, Sidney Lanier was inspired to write his poem, “Marshes of Glynn.” There’s Lover’s Oak in Brunswick’s South End, and the Avenue of Oaks that leads into The Lodge is among the prettiest avenues in the South.

A dead cedar, apparently with its roots shorn off by a storm’s violence, lies on its side north of the Coast Guard park access to East Beach. Some of its limbs have been splintered revealing the heart wood that gives the tree its name although “red” doesn’t really capture the beauty of a cedar’s color.

The tree was young, and even mature cedars never achieve the stateliness of old oaks and towering yellow pines.

But Bill Besser has a vision for this little tree that, unless it is somehow anchored, will likely be swept away by a wind driven tide. Besser wants the little cedar’s limbs to become the next hanging places for mementos, memorials, baubles, shells, ornaments, lost flip flops or, well, whatever.

It would not be the first. There has been at least one tree and perhaps two, both of them dead and standing upright close to where the beach and dunes began the curve to the west toward Gould’s Inlet.

The first, if it was the first, may have been a mature myrtle that some say was deposited upright by a storm driven tide and left out of reach of subsequent tides. It had a few main upright branches and people turned it into a Christmas tree, hanging ornaments, tensile garland, shells, sand dollars and mardi gras beads.

Besser said he heard it referred to as Jennifer’s tree, and there is a picture in the ether of Jennifer Whiddon wrapped for winter with her dogs at the tree. She seems to be adding to the many Christmas ornaments.

The tree seemed to shift a few times and the wind took some of the decorations, but it became a sort of attraction, something else people could show their friends and visitors from out of town besides the lighthouse, Christ Church and Fort Frederica.

Then there was a second tree, or perhaps a redesign of the first. It seemed farther south although the topography of the beach changed dramatically in the past 10 years and the adornments underwent a change of their own. In the BC years – Before Covid – the tree was decorated and appeared to have a limb reattached. It still had oyster and clam shells hanging from its leafless branches and a couple of shells, one painted with a Santa face complete with red hat and the other a snowman.

There was a piece of pipe dangling and zip ties. Some were mementos to lost friends, and there was a picture memorializing Jamie Wellman, the beloved principal of Western Hills High School. He enjoyed visiting his sister and brother in law, Amber Wellman and Tim Carlson, on St. Simons and loved their beach.

The robust and unrelenting waves from one of the recent storms took it all, and people apparently miss it because they have begun hanging shells from the dead wax myrtles a few dozen paces north of the cedar that Besser favors. Someone fashioned a cross of sticks and tied them together with a dead root. The cross is decorated with a number of shells and other natural items.

As I was talking to a friend about the old trees a couple of days ago, she asked, “The mourning tree?” 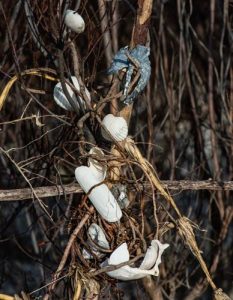 A cross fashioned of sticks in dead wax myrtles on East Beach is decorated with shells. Terry Dickson/The Brunswick News

That’s part of what Besser has in mind but not all.

He first saw the original trees when he moved to the island 11 years ago after retiring as a special education teacher in Fort Collins, Colo.

“I just think that has such potential,’’ he said of the possibility of the cedar becoming the new Christmas/Memorial/Mourning/St. Patrick’s tree.

“It was something we saw when we first moved here. It was very attractive and we took guests to look at it,’’ he said.

But that wasn’t his only happy encounter.

One morning he met a man walking on the beach and they struck up a conversation.

“He was one of the first people I met on St. Simons,’’ Besser said, “just walking on the beach.”

They became best friends and they fished from the rocks east of Gould’s Inlet before the sand covered them and later along the stretch where the cedar lies slumped.

That friend, whom Besser declined to name, died a couple of months ago, and Besser wants a tree established as a benchmark of honor and memory to him and to others. The beach is, after all, a good place to remember and reflect.

Besser has contacted Commissioner Cap Fendig and has reached out to the DNR in hopes of getting some kind of sanction for a new piece of memorial drift wood. It’s doubtful an agency with the mission of protecting the environment can sanction hanging flotsam and jetsam, be it plastic, metal or natural, on a tree in reach of the tides.

As shown by the decorated wax myrtles, people aren’t waiting. Someone hung the first shell or perhaps several and others added to them.

Maybe the best advice is in an old Nike sales slogan: Just do it.