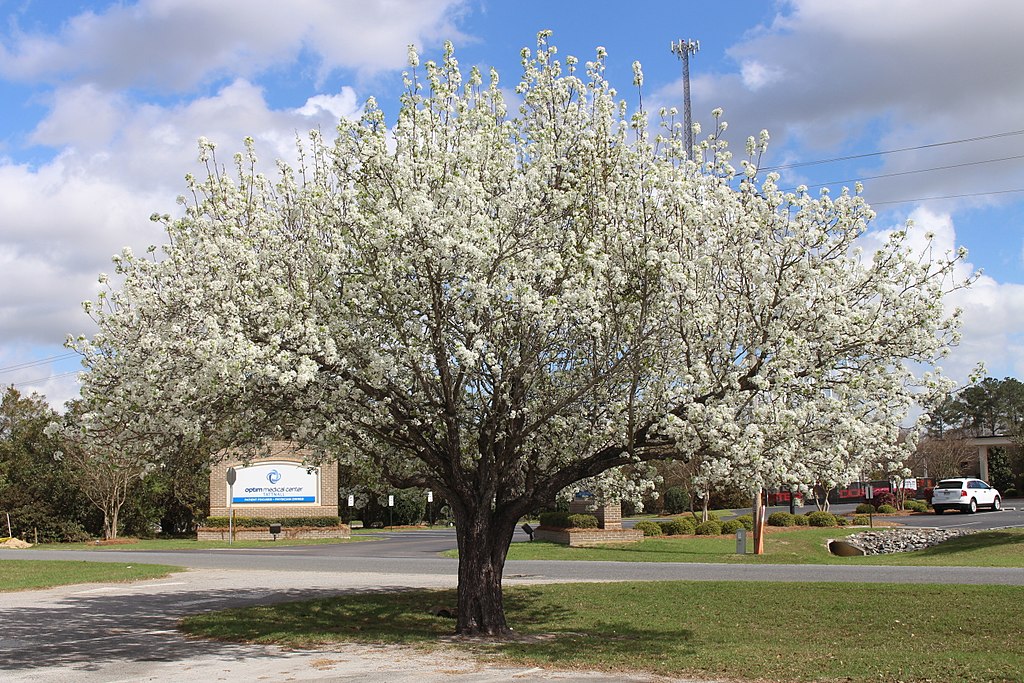 Continuing the theme from last week’s article about Leyland Cypress, we bring you another problem tree: the Bradford Pear

Many of today’s invasive plant species are the result of landscaping and horticulture choices. The quest for the “perfect tree” often leads people in the green industry to seek unique and sometimes exotic species of plant to fill a need. Perhaps the most infamous tree of the 20th century is the Bradford Pear.

Introduced in the 1960’s alongside suburban expansion, the Bradford Pear checked every box: fast growth rate, showy flowers, and the ability to grow just about anywhere. The New York Times had this to say in 1964, “Few trees possess every desired attribute, but the Bradford ornamental pear comes unusually close to the ideal.” However, over time, the true nature of the Bradford Pear would be revealed.

The first and most obvious issue with these trees is their odor. While many flowering trees are known for their pleasant aroma, Bradford Pear trees in bloom have an odor not unlike spoiled fish. Perhaps the most notorious downside of this tree is its strength and structure. Due to their extremely fast growth rate and poor brand structure, Bradford Pears are extremely likely to split apart and topple over in even the smallest gust of wind.

The most serious consequence of introducing the Bradford Pear to our region is their ability to spread like wildfire, outcompeting native species in the process. While Bradford Pears were bred to be a sterile cultivar of the Callery Pear, the tree is able to cross-pollinate with other types of pears, and, as such, these offspring will revert from their sterility and grow long thorns that are characteristic of the original Callery Pear. Birds are the main reason for the rate of spread. Drive down I-95 in the spring and you’ll notice the sea of white flowers along the shoulder. Those are all wild, invasive pears.

Some parts of the country are starting to enact bans on the trees, prohibiting the cultivation, sale, and planting of the Bradford Pear. Currently, in Virginia, the Bradford Pear is still readily available at most nurseries, but trained nursery staff will likely steer you towards a better selection for your property.